Since its release on April 26th of this year the Asus Transformer has been one of the most popular Android tablets on the market.  It’s price ($399 for the 16GB version) combined with a very nice IPS screen and a fairly unique keyboard dock have ensured that this tablet sells out almost as soon as retailers get them in stock.  Thankfully Asus has ramped up production this month and some of the component shortages have been lessened so folks who want one should have an easier time of it soon.

The hardware of the Transformer is similar to other 10.1” Honeycomb tablets such as the Motorola Xoom and the Acer Iconia.  Its got a 1GHz dual core Tegra 2 processor, b/g/n WiFi, Bluetooth, 1GB of RAM, front (1.2MP)  and rear (5MP, no flash) cameras for pictures, 720p video recording and video chat, and can be had with either 16 or 32 gigabytes of memory.  It also has a microSD card slot for additional memory.

It has a built in mic, a 2-in-1 audio jack (headphone/mic input), a mini HDMI 1.3a port and dual speakers.  There is also a G-Sensor (accelerometer), light sensor, gyroscope, e-compass and GPS.  Battery life is quoted as 9.5 hours for the tablet itself, extending to 16 hours when adding the optional dock (more on the dock below).

The device measures 271mm x 171mm x 12.98mm (about the thickness of the iPad 1) and weighs in at 680g.  The back is a curved textured plastic and makes the Transformer quite pleasant to hold.

The 1280×800 10.1” IPS screen is quite nice with a 178 degree viewing angle, nice colors and dark blacks.  While the mirror like gloss of the screen makes it near impossible to read from outside in bright sunlight it’s pretty good when reading out of direct sun.  The screen also uses Gorilla Glass which makes it very durable.  Two complaints I’ve seen associated with the screen are its responsiveness and light bleed. There is a bit of light bleed on my unit, but as it’s only really noticeable when in a dark room with a dark background and the brightness cranked up so I’m not too bothered by it.  I’ve noticed no responsiveness problem at all in fact the screen response is quite snappy.  Some of the responsiveness complaints may have been a Honeycomb 3.0 issue that was fixed with the 3.1 update.  As my unit updated over the air when I first set it up I never tried it with 3.0 at all.

One thing that makes the Transformer different than other tablets currently on the market is its optional $149 keyboard dock.  While there have been tablet PC’s over the years with similar concepts they’ve never really lived up to their potential in my opinion so I was eager to try it on the Transformer.  Due to demand (or just a shortage from Asus) the cheapest I could find a dock when I ordered my Transformer was $200 which I was unwilling to pay, but thankfully shortly after my tablet arrived they started showing up for MSRP at Amazon and other retailers so I was able to grab one.

This dock essentially turns your tablet into a mini laptop or netbook.  It gives you a full QWERTY keyboard, a touchpad for navigation, and audio jack, two USB ports (I tried a thumb drive and a mouse and both worked fine) and an SD card reader.  It also has a battery built in which extends the Transformer’s 9.5 hour battery life to 16 hours.  Docking the tablet is simply a matter of sliding the bottom edge of the Transformer into the docks hinge.  To separate the two you simply slide a small latch and pull them easily apart.

While not quite full size I found typing on the keyboard dock pleasant enough and certainly the way to go when typing longer documents.  In fact I’m typing this post on the Transformer with dock right now.

As long as we’re talking about keyboards I’ll also take a moment to mention the on screen keyboards, there are two.  There is the stock Honeycomb keyboard which works fine and also Asus has added their own keyboard which adds a number row and a few more customizable settings than the stock keyboard. 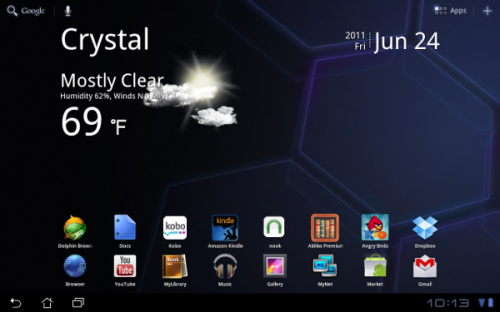 Now that we’ve talked about the hardware side of things let’s take a look at some of the apps that come pre-installed on the Transformer.

My Transformer came with two reading apps installed, Kindle which we’ve covered before and MyLibrary which is unique to Asus.  Since we’ve covered the Kindle app before I’ll just quickly comment that it works quite well on the Transformer and move on the MyLibrary app. 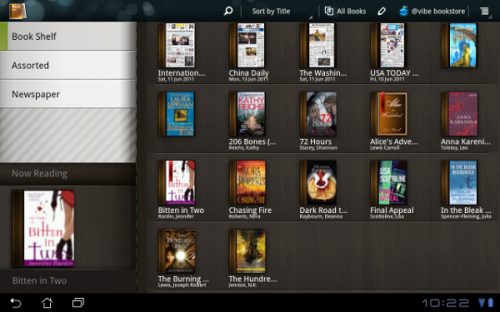 I found the MyLibrary app to be pretty decent surprisingly.  It’s pretty bare on features, but works well for the most part.  MyLibrary works with ePub, PDF and txt files which you can add via USB, download online or buy from the Asus @vibe store.  I found the @vibe store a pain to navigate and very slow, any books you buy are stored in you @vibe cloud library & I saw nothing that mentioned you actually being able to download a file. I doubt I’ll be heading there for books anytime soon. 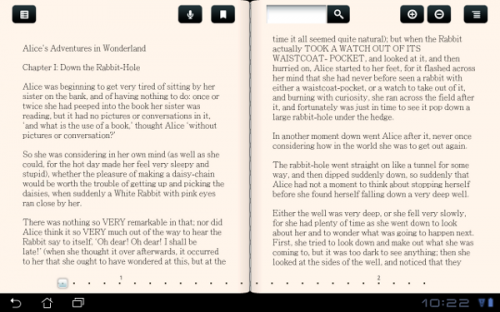 The reading experience for ePub’s is pretty decent.  In landscape mode you get two pages side by side with animated page flips and stuff.  It kinda made me think of a not as good imitation of iBooks actually.  The app also adds any Kindle books you have on your device you your library shelf and tapping those books automatically launches the Kindle app.  This might be kind of handy as a one stop shelf for all your various books except while it also shows your B&N books it tries to read them itself, instead of launching the nook app, and all it displays are blank pages. It doesn’t display books loaded to the Kobo app at all. While it works with standard Adobe ID based DRM it appears it doesn’t support the Adobe Password based DRM that B&N uses.

MyLibrary supports bookmarks, notes, highlights, a built in dictionary, text-to-speech and search.  You can also have it translate a highlight into eight different languages.  It does not support hyperlinks or tables of contents and has no night reading mode.

MyLibrary frankly sucked with the PDF’s I tried, the text was completely blurry and unreadable. I recommend ezPDF, my preferred PDF reader on Android, or RepliGo as the top ways to do PDF. Polaris Office which comes with the Transformer does a pretty good job with PDF’s as well.

Are you a newspaper reader?  The PressReader app that comes pre-installed on the Transformer might just be the killer app for folks who do. PressReader provides access to more than 1,800 newspapers from 94 countries.  Newspapers are displayed just like their printed counterparts with the same layouts and pages as the print edition.  You can pan and zoom to navigate a page or tap an articles headline and the article will be reformatted into an easy to read layout for your screen with text-to-speech, sharing options and adjustable font sizes.  I found this apps text to speech to be one of the better implementations I’ve listened to.  The app can also be setup to automatically retrieve your newspaper subscriptions.

If I had to fault this app it would be cost. It’s $29.99 a month which is great if you read a bunch of different papers (you get access to all of them), but as someone who hardly ever reads a paper it seems pricey.  You can also buy single issues for $.099 which is what I did to try it out.  Still even though I’m obviously not their target audience I found myself impressed with this app (they also have an iThing version). 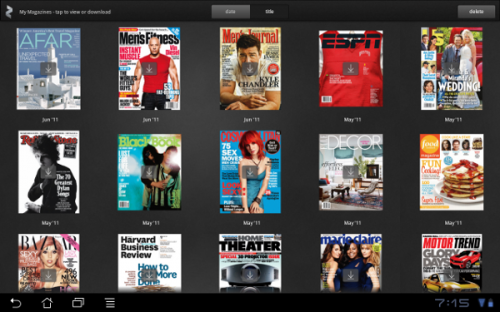 My Transformer also had the Zinio app installed.  For those unfamiliar with Zinio they sell magazines in digital format.  The Zinio app works nicely although after playing with PressReader I can think of a few ways they could make it better.  I found navigating a magazine to be simple and work well.  My biggest complaint would be that all of the magazines on the Zinio website aren’t yet available for viewing with the app.  Prices for subscriptions appear to be about the same as print or higher. 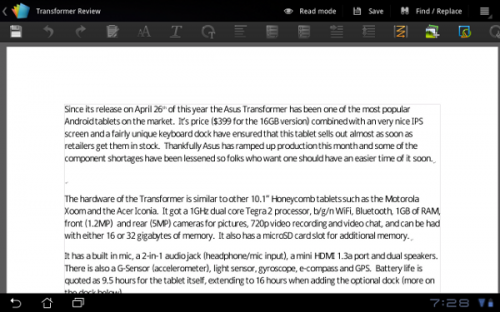 The Transformer also comes equipped with Polaris Office 3.0 and this is where the optional keyboard dock can really come in handy.

With this app you can create, open and edit documents in familiar formats like .doc/.docx (Word), .xls (Excel) and .ppt (Power Point), it also makes for an OK PDF viewer as well.  This thing gives you a pretty full featured word processor as well as allowing you to do spreadsheets and presentations.

The Transformer also comes with the Asus MyCloud and MyNet apps.  MyCloud has a couple of functions, the first of which is to access Asus Webstorage which is a cloud storage service like DropBox or SugarSync.  The other thing MyCoud lets you do it remotely access and control your home computer (PC or Mac) kind of like the Windows remote desktop.

MyNet allows you to stream music, movies or photos from any DLNA compatible device to your tablet, although I couldn’t get it working on my network. 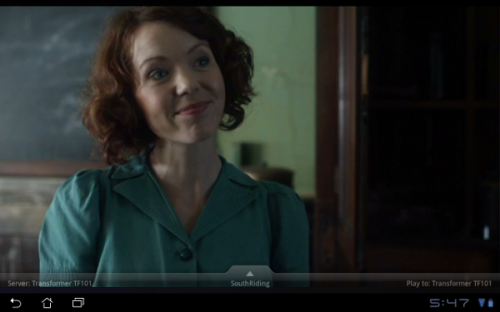 I used a DVD resolution video I created and Youtube to test video playback. Video from both was smooth and looked great.  Although the built in speakers aren’t anything to write home about, and I wish they’d positioned them up higher on the sides so I don’t sometimes cover them while holding the tablet, they get the job done OK.

Asus has put out a solid device in the 10” tablet arena at a better than average price and while I look forward to Google polishing Honeycomb a bit more and the marketplace needs more tablet centric apps I think the Transformer is a winner.  The optional keyboard dock gives it a real boost for someone looking to do basic tasks and leave their laptop behind.  As a reader it works quite well although I’ll stick with eInk for long reading sessions.  Overall I’m quite pleased with it and find it a well rounded device.