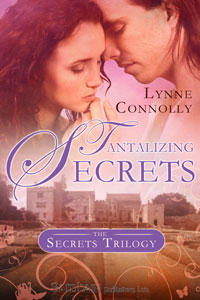 I must thank you for continuing to write in my favorite historical era, the Georgian. There’s just something I adore about strong men in powdered wigs, wearing bright colored coats with small swords at their sides. Oh, and red heeled shoes. Can’t forget those. Period paintings make them look so dashing and their ladies fair seem so dainty. But enough of my period gushing and on to the book.

“Tantalizing Secrets,” book three in your Secrets Trilogy takes us to Peter Worsley, second son of an Earl who is forging his way through London politics. Or was until the day that a young woman appears at the family pile bearing a letter from her dead brother-in-law who was a land steward to the Worsley family. Or was he?

Peter and his father immediately recognize the handwriting of the eldest son of the family, Gerald. But Arabella Mason says the man’s name was Lewis Worth and that he was married to her sister and was the father of her nephew. Secret number one. Peter knows he has to check this story out because if it’s true, then his brother was up to his neck in bigamy, already being married for the past ten years until his first wife died two years ago. If, at that point, Gerald remarried wife number two, then their son would be the heir and Peter off the hook.

What? A second son who doesn’t want the title? But indeed yes. Peter is quite happy as a politician and would desperately love to dodge this bullet. Arabella Mason cares little for this being only interested in her sister’s interests. She agrees to take Peter along with her to confirm his brother’s identity and see if a remarriage occurred.

Events quickly spiral into deeper complications as Peter begins to look into the manner of his brother’s death. Something’s definitely wrong in the town of Leicester. His brother was afraid of heights so why did he venture up onto the tower of the local church? Secret two. The button factory owned by Arabella’s late husband turns out a quality product but are clothes fasteners the only thing being made there? Secret three. And what is Peter going to do with the attraction he feels for this young woman who moves in a world so different from his own? Major secret four.

With this book, you place us squarely in the world of the upper middle class in a medium size town of mid-eighteenth century England. And thus highlight the social differences between Peter and Arabella. Though he was not raised to be the heir to his father’s title, his world is that of the aristocrat while Arabella, the daughter of an impoverished vicar, is thought to have improved her status by her first marriage to an older tradesman.

Peter, who has never felt more than dutiful affection for his distant parents nor an overwhelming sense of “home sweet home” for Ulverscroft House, finds himself charmed by Arabella in her natural world. No one’s bowing or scraping to his position. No one’s importuning him as a government official. Here he can relax, lightly flirt with the local ladies and pursue his interest in Arabella. I found that to be a refreshing change. He’s a man of the world, ready to indulge himself with a pretty woman should she prove willing.

Arabella is not, thank God, a virgin widow. True she didn’t climb the heights of ecstasy with her older husband but she’s direct enough to respond to Peter’s openly stated designs on her bed and person. No missish “should I or shouldn’t I” waffling from her. Once they find themselves in bed, she gives as good as she gets and enjoys herself immensely.

I would like to have seen more of Peter as a rake before he met Arabella. Yes, he does have to face his past when it threatens his future but the tantalizing, sorry I just couldn’t resist, glimpse of his sexual interests in heady London remained just that. You say he was bad, the gossip columns tittered about his badness, staid older matrons sniffed at his exploits but, gosh darn it, I wanted to see some of them.

The reason behind Peter’s decision to marry and produce an heir was also a breath of fresh air. I’ve often wondered what happens to aristocratic families headed by someone who just isn’t cut out for the responsibilities thrust upon them by primogeniture. Isn’t the current Duke of Marlborough still having problems with his heir? But, hey, you gave us bigamy so that counts for something. I know you often use historical events as a basis for things in your books so I must ask if this is one of them.

The actions of the villain of the story are more plausible to me than in the previous book. Yet there is still a slight degree of “where did this come from?” And where were all the agents of the Crown when things went down?

I feel for poor Arabella, having to take on Ulverscroft House. Though she indulges in one too many, “why are you interested in little ol’ me” moments with Peter, I think she’ll be able to take on her new responsibilities seeing how well she managed her own home. Plus she’ll have her new friends to help her be a Countess. And if you must bow to the pressure of having each one of your heroes end up a lord, at least you often pick the most abundant title.

When you introduced this series, you mentioned that each one would feature an interest that became fashionable in the eighteenth century. So far, we’ve seen chicken husbandry, astrology, and optics but what, may I ask, is the feature for this book? Button making?

Since this book ends this trilogy, I hope that you have more Georgian plots and books in store for us. I can count on being immersed in the era and learning something new to me each time. Though I wouldn’t mind reenacting a short amount of time “back in the day,” I will admit to being happy my house doesn’t require burning several trees to heat the entry hall in winter. B