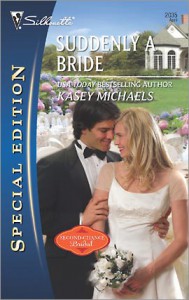 I will admit to loving to wander through bridal shops and checking out gowns, headdresses and accessories. There’s just something about all that hope and promise of a future plus getting to look like your version of a Princess for a Day that gets me every time. And though I would probably be driven to drink by a Bridezilla, I think it would be fun to work in one. Chessie Burton seems like an ideal person to sniff out her brides’ hopes and fears and a wonderful person to have as a friend.

Elizabeth Carstairs isn’t sure whether or not to accept her boss’s proposal. The young widow and mother of twins could certainly do with the financial security marrying the wealthy author would bring and they certainly like each other. But is that enough for a woman who’s known true love? Hoping that a trip to a bridal salon and trying on dresses will help her decide, she tentatively steps across the threshold of Second Chance Bridal and into the orbit of owner Chessie Burton.

Chessie quickly discovers Elizabeth’s fears and decides to step in – well, okay butt in – by calling on her hottie cousin Will Hollingswood to wake up the widow Carstairs with some careful flirting plus a date or two. Just enough to remind her that her hormones are there then back off. Only Elizabeth and Will soon find out they’ve got explosive chemistry which leads Will to begin thinking about things that a confirmed ladies man shouldn’t be thinking of such as fatherhood, back yard barbecues and forever. Is Will ready to take on an instant family or should he just kickstart Elizabeth then quietly leave her to Richard?

There are so many things I love about this book and so many ways it avoided the pitfalls which normally lower my grades. Let’s see:

Elizabeth’s first husband is someone she loved right to the end and someone she will always love. He isn’t turned into an ogre to make Will look better nor is he revered as a saint. You also give Elizabeth time to reflect on him, remember him then move on as she must with her life. The line where she thinks that she’ll always have him in her life as long as she has their sons made me smile and choke up a little.

Thank you for letting Elizabeth be a woman as well as a mother. Too many times I’ve read books about young mothers which focuses totally on their role as a mother to the exclusion of all else. Elizabeth still likes to look nice, likes the sound her new heeled shoes make when she walks, likes buying pretty things for herself and the attention Will gives her. Yet she can snap back into “Mom” in a moment’s notice and already laments that her babies are growing up and moving past being totally reliant on her. Both these sides of her seem very realistic, very natural.

Will comes across as a man who hasn’t been around small children very much. I laughed when he asks Elizabeth if they can sense fear and asks her for tips on how to deal with them. Yet his interactions with Mikey and Danny – Mike and Dan as he begins to call them – seem to start where I would expect – with buying sports gear – then move slowly to getting those first haircuts then to caring about the boys as a father would. I would have been suspicious of any feelings of instant fatherhood on his part just as much as instantly falling in love with Elizabeth. It’s her looks which catch his eye first followed by her inner personality.

Mike and Dan read as two seven year old boys. Charming at times, rougish at others with what they’re thinking tumbling out of their mouths without any editing. They’re just beginning to see their mother as someone other than Mom and aren’t totally sure about what marriage entails so their response to Will’s proposal – which is a scream, BTW – makes sense.

I also like that when the chance for a Big Mis followed by a blowup occurs, you sidestep it and keep to the story at hand. As well, when the opportunity for Will and Elizabeth to begin an adult relationship happens, it starts naturally and they enjoy it for what it is without instantly thinking “I’m in lurve!” The progression of their relationship from initial attraction to physical to emotional flows. And while the time frame from first meeting to marriage is quick – this is a Harlequin after all, you managed to suck me into it to the point I even enjoyed the epilogue.

I’m a long time fan of yours and delighted to be able to recommend yet another of your books. It’s a book which reads quickly, is also funny yet still deals with some emotional depths. I’ve already got the next book in the series ready to go and hope it lives up to this one. A-

→ Jayne
Previous article: REVIEW: Cheating Chance by James Buchanan
Next Post: We Are in the Flux Vortex