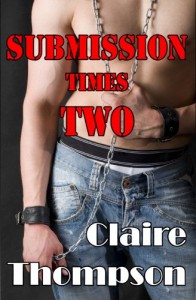 I started with Submission Times Two because how could I not?! It hit all my buttons: menage, m/m, and BDSM. But especially the menage. Cam and Ethan are desperately in love with each other. They’ve been living together for just under a year. They’re committed and focused on making their relationship work no matter what. The problem is, they’re both submissive, and unable to dom each other convincingly. So they’ve worked out a deal: on the weekends, they each go to different clubs, scene with doms there, get their pain-play needs met that way, and then go home and fuck like bunnies. So far, it’s been working out for them. Then Ethan hooks up with Maestro and starts thinking about how he needs more than just weekend scenes — he needs a full-time dom, which of course starts getting in the way of his relationship with Cam.

“Maestro” is actually Andrew, and he’s sort of semi-stalking Ethan. He had a huge crush on Ethan back in high school, when Ethan was the so-closeted-even-he-didn’t-know-he-was-gay quarterback who everyone adored, and Andrew was Andy, nerdy and completely forgettable. Andrew finds Ethan through Facebook, and figures he can finally make a dream come true when he figures out that not only is Ethan gay, but he’s submissive. He goes into the relationship figuring he’d steal Ethan from his partner, only to change his mind when he meets Cam.

Cam, of course, is pretty upset when Ethan starts keeping things from him, but what I loved about this story more than anything else is that no one huffs off in a Big Misunderstanding. They all TALK with each other, and work things out, just like real people in committed relationships should do. If they do go off half-cocked (harhar), they get their heads out of their asses pretty quickly and figure things out.

The characters weren’t 100% differentiable (if that’s a word). When you’re dealing with three men, more has to separate them from each other than their names. While Andrew was obviously different from the other two because he was a dom, Cam and Ethan were less distinguishable. They had different backgrounds, of course, and difference relationships with Andrew, and different needs. But I couldn’t tell them apart by speech. I couldn’t figure out whose head I was in without a name marker. The dialogue was great, the banter well done, the conversations good. But the characters didn’t sparkle and because they weren’t instinctively different from each other, I kept having to consciously remind myself that Cam was the one who ____ and Ethan was the one who ____ and that was a little distracting.

But overall, I think the preachiness is a result of the biggest problem I had with story. The writing was inelegant. I’ve thought long and hard how to say this, and I think that word is the best choice I could make. The writing has no sparkle; there are no surprises. Every cliche is milked for all it’s worth. If a situation happens, I just knew what phrase was going to be used to sum it up. The story and emotions and characterization were all mostly solid. And although there was nothing terrible about the writing — with the actual stringing of words into sentences — it was pedestrian, sometimes even boring, although the story itself wasn’t boring. At times this annoyed me, at times I could ignore it and sink into the story. I loved the story and these guys, but the writing was, well, inelegant.

This book can be purchased at Amazon or in ebook format (this vendor is unknown to us).