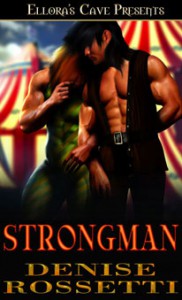 Strongman is set in an alternate world (or maybe a far future Earth, technologically diminished?), something I’m usually not interested in reading because world building bores me. But here it’s done so smoothly, so organically, that I hardly noticed I was learning about the world as I was reading. I loved the very short Encyclopedia entries beginning each chapter, explaining parts of the world just as they became important to the story. New species and situations were introduced and explained seamlessly, with no info-dumping, no “As you know, Bob” moments. Perfect.

Griff is a tumbler, part of a circus act. Fortitude "Fort" McLaren has just signed on as a roustabout and general muscle for the circus. It’s instant attraction for both of them, but Griff’s much more comfortable with that than Fort is, whose background as a child in the Straight Church, where homosexuality is a sin punishable by death, still affects him, no matter how much he tries to claim it doesn’t. I especially liked the unexpected spirituality of the story and its effects on the characters. Fort has converted to a matriarchal religion with a strong emphasis on the joy sex provides, but still finds himself running up against his Straight Church background in unavoidable ways. But Griff pushes and pushes and pushes, until it’s more work for Fort to deny him than to accept their attraction.

Although the story is set in the circus, most of the progress of the romance takes place outside the circus, as Fort and then Griff are on a scouting journey that’s part of an obviously larger narrative. The romance is most beautifully perfectly done. Each step in their relationship reveals more about the individuals, where they come from, who they are, why their partner attracts them, and what they’re going to do about it. The focus of the story is mainly Fort’s journey and I just fell in love with him as he fell in love with Griff but had to push himself to accept it:

Today was all Fort had, all he could allow himself. Because he couldn’t live his life like this, not every, ordinary day after day and still be Fort McLaren, still be the man he knew. This was a time out of time, a dark, shining secret graven on his soul. Precious. But he couldn’t prevent the sly thought that it wouldn’t be difficult to persuade Griff to come away with him again, somewhere like this. He looked around. Yes, somewhere exactly like this.

Griff took another nibble, on the shoulder this time, and Fort closed his eyes, telling the thought to go to hell. The tumbler deserved better and he- No. Think about the moment, only the moment. He couldn’t risk the other man’s life to satisfy his own crooked lusts. Tomorrow he’d escort Griff back to the Valaressa road and send him on his way.

Something small and sad and stupid whimpered deep in his chest, but he told it to shut up. He got Griff out of the water and over to the tents so quickly it felt like levitation.

I usually don’t like illness or injury as a way to force the denouement of the romance, but you do it so very well here, with such deep emotion, and such stripping away of all Fort’s defenses, that I very happily went along with it.

The sex, by the way, was amazing. Fort is the title’s “Strongman,” but Griff is a tumbler and can give as good as he gets. Evenly matched, each sexual encounter is a fight for dominance and it’s hot and fascinating and each scene is integral to both plot and character development.

The only niggle I had was that, although the story was obviously part of a larger plot so characters from a previous book in the series were necessary to that larger plot and rather seamlessly integrated, it still felt like a revisiting of old characters as a reward for long-time readers. Then again, I wouldn’t mind revisiting Fort and Griff in future books of yours, and I’ll probably go back and read the previous books in the series.

Thank you for a fun, hot, sexy read.

This book can be purchased at Ellora’s Cave.