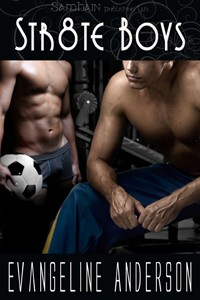 Evangeline Anderson’s books are my dirty little secret, my secret shame, my love that dare not speak its name. I don’t know WHY her writing makes me feel oh so fulfilled but in such a wonderful dirty way, but it does. They’re so full of *angst* and *melodrama* and *gay for you* and all the things that usually just make me roll my eyes. But they’re quick reads, hott! as anything, rollicking good fun, and you totally don’t notice the huge gaping plot holes until after you’re done and REreading the damn thing when you go, Hur? (like I just did). Her books are the one reading habit I’m ashamed of, but it’s the squidgy, yummy shame that you just want to share with people. So let me share…

The idea was for two guys to get as close to kissing as they could. The one to pull away first was the loser. Duke always won because he was a fierce competitor where any sport was concerned-‘be it soccer, baseball, basketball, football, table tennis-or gay chicken.

Riiiiiight. And that’s pretty much the plot. Duke plays gay chicken with Maverick as the stakes get higher and higher, until Mav starts issuing his own dares. And as you read through your wince, eyes squinty from embarrassment (like that terrible, wonderful, can’t-not-look movie, How to Lose a Guy in 10 Days), the scenes just get hotter and hotter. And Maverick is all like, “What does this make me? Am I gay? No! I’m just helping out my best friend as I suck his cock! I don’t feel this way about anyone else but him! But the sex is so hott! how could I be straight?!” And Duke is…

Well, there’s the plot hole. Duke is captain-of-the-soccer-team, huge-porn-collection, totally-blind-drunk-at-parties, spent-rent-money-on-weed STRAIGHT!dammit. More-grossed-out-by-gayness-than-Mav STRAIGHT!dammit. And then not so much. Then all the angst is about how he’s been gay and in love with Mav all along, waiting for Mav to see the light. And it totally works while you’re reading, but then you think about it and go, Hur? and feel all dirty again. :)

The one thing about Anderson’s writing is that she writes men in a fascinating way. Her men sound like and think like men, but somehow I can’t ever forget that they’re being written by a woman. These are not “men” who say to each other, “Let’s talk about our feelings,” as I once read in a m/m romance (*gak*). And they’re not what DA Janet calls “heroimens,” who take SUCH good care of the heroines and paint her toenails and give her a backrub–without sex! Anderson’s men are emotionally constipated, porn-loving, beer-drinking *men*….who happen to have been sleeping with each other–completely platonically!–for two and a half years?!?! Again, I say, ORLY? When I read Anderson, I can’t shake the conviction that her men are the female-constructed fantasy of emotionally constipated, porn-loving, beer-drinking *men* blindsided by love for their best friend. I mean, of course they are–they’re written by a woman. But some women write men who just read like men (La Nora, of course, and Suzanne Brockman, K.A. Mitchell, frex). Anderson writes men who read like men constructed by a woman. Which doesn’t mean they’re not fun–they totally are–but rather than just falling into the story and coming out the other side, I’m constantly aware of the meta-narrative, the “fantasy constructed by a woman for women”-ness of the stories.

But then there’s lots of lovely groveling by both boys and it doesn’t matter anymore. And at three in the morning, when no one’s watching, I’ll open my computer and guiltily read Str8te Boys and Anderson’s ultimate gay-for-you, The Assignment again. And again. And again and again. And if that’s not the ultimate endorsement, squidgy dirty shame aside (or maybe not, maybe that’s the point), I don’t know what is.

Grade: A squidgy guilty B-

-Joan/Sarah F. (who couldn’t bring herself to actually address this to Dear Ms. Anderson, she now realizes. Hrm.)

This book can be purchased via Samhain Publishing.