REVIEW: Son of the Sea by Nancy Holder 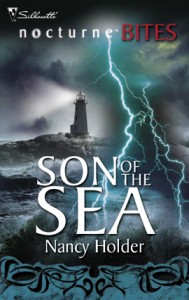 />I’m afraid the merfolk romance is not for me. I’ve never been enchanted by merpeople and honestly, the thought of getting up close and personal with someone who has a fishtail weirds me out. It also makes me crave sushi, which weirds me out even more. I love sushi but not in the context of merfolk cannibal romances. There’s a good reason that market doesn’t exist.

Nia Diakros struggles to run a restaurant while raising her younger sister. Having lost their parents several years before, Nia is surprised when she’s contacted by a woman claiming to be her aunt. Unaware they even had an extended family, Nia’s skeptical at first but eventually decides to speak with the woman. Unfortunately, before that can happen, masked men attack their restaurant and kidnap her sister. Not long after, another group of masked men kidnap Nia herself.

It turns out that Nia comes from a family of guardians who’ve been charged with protecting a magical artifact. In her family’s case, it’s a jar. Two opposing groups want the artifact — the one Nia has been taken by and the one that’s taken her sister captive — and each one hopes to find it before the other. The group Nia is with is led by Erik, a bitter merman Viking chieftain who has lived alone for over a century, ever since his beloved decided she didn’t want to pay the price for his love. As expected, sparks fly between Nia and Erik from the moment they meet.

I fear the story lost me the second Nia and her sister get kidnapped. I can’t help but feel that we’re suddenly tossed into the middle of a plot that’s already halfway over. There’s some mystical war going on that involves guardian families, magical artifacts, and soulmates but for the life of me, I could not figure out what was going on and who were all these people everyone was talking about. I originally thought this was a prequel launching a new series for Silhouette Nocturne but further investigation on the eHarlequin website shows that books were already written in this setting and published through the Silhouette Bombshell line. (New books in the setting will be published through the Nocturne line starting this month.) That would have been helpful to know beforehand. No wonder I was so confused.

The romance between Nia and Erik also failed to work for me, but a large part of that is due to my ambivalence towards merfolk as romantic figures. I also had a few misgivings about Erik’s psychic coercion of Nia in various situations — most notably, during the sex scene. While the fate of the world did rest in the balance, or so the story’s narrative told me, it did make me uncomfortable.

This story illustrates the dangers of writing in an established setting. Authors have to balance keeping their loyal readers entertained while introducing new readers to their world. And in that regard, I think “Son of the Sea” failed. Even after finishing the story, I’m still not sure what the war is about, other than random people fighting over MacGuffins, whose significance remain a mystery. D

This book can be purchased in ebook format only from various online resources including Harlequin.

→ Jia
Previous article: REVIEW: Blame it on Paris by Jennifer Greene
Next Post: Brick and Mortar Book Sales Down 7.6%