REVIEW: Something About You by Julie James 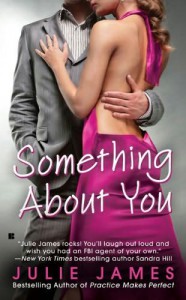 How do I like this book? Let me count the ways. I do like contemporaries and even the occasional romantic suspense but rarely do they combine as well as you’ve done with “Something About You.” And wow, even the cover model kinda looks like she’s wearing the dress you described. And how often does that happen?!

I’m going to be mega lazy after a hard day at work and just borrow your blurb.

Of all the hotel rooms rented by all the adulterous politicians in Chicago, female Assistant U.S. Attorney Cameron Lynde had to choose the one next to 1308, where some hot-and-heavy lovemaking ends in bloodshed. And of all the FBI agents in Illinois, it had to be Special Agent Jack Pallas who gets assigned to this high-profile homicide. The same Jack Pallas who still blames Cameron for a botched crackdown three years ago-‘and nearly ruining his career-

Work with Cameron Lynde? Are they kidding? Maybe, Jack thinks, this is some kind of welcome-back prank after his stint away from Chicago. But it's no joke: the pair is going to have to put their rocky past behind them and focus on the case at hand. That is, if they can cut back on the razor-sharp jibes-‘and smother the flame of their sizzling-hot sexual tension-

Jane said the book was good but she didn’t say how good. It’s great. Lessee, a heroine who is smart, acts smart and when she’s told she needs to be under protective custody, she doesn’t fight it with the same old stupid plotting I’ve seen with this kind of novel. She doesn’t think it’s fun to escape her police escort, she agrees to have them come along for a bridal party at a nightclub and ends up telling them all about her friends and the wedding she’s going to be in. They like her and she likes them. She’s good at her job and follows her professional principles even when she has to come to Jack’s rescue. And even after he loses control and tells the world she had her head up her ass during a previous case. Bliss.

And then there’s the hero who is portrayed as being as sinfully delicious as a double fudge chocolate cake with chocolate chips on top. And whipped cream. Jack’s initially not thrilled to have Cameron back in his life – just as she’s not too thrilled with him, but he takes her protection and her involvement in the case seriously and treats her with professionalism. He explains why she needs to be under protective custody instead of just strong arming her then he’s willing to protect her at any cost. Bliss, bliss.

The dialogue is fantastic. Smart, snappy, funny yet realistic. I can’t count the number of times I laughed while reading the book. The scene of the two CPD officers and the two FBI men talking about Cameron’s dating life is a sceam.

"So- for some reason we thought you were the guys assigned to Ms. Lynde's surveillance. Guess we were mistaken?"

"Nope, you got it right," Kamin said. "We do the night shift. Nice girl. We talk a lot on the way to the gym."

"Oh. Then I guess Agent Wilkins and I are just curious why you two are here instead of with her."

Kamin waved this off. "It's cool. We did a switcheroo with another cop, see?"

"A switcheroo- right. Remind me again how that works?" Jack asked.

"It's because she's got this big date tonight," Kamin explained.

Jack cocked his head. "A date?"

"I must've missed that one."

"Oh, it's a great story," Kamin assured him. "She crashed into him coming off the escalator and when her shopping bag spilled open, he told her he liked her shoes."

"Ah- the Meet Cute," Wilkins said with a grin.

Jack threw him a sharp look. "What did you just say?"

"You know, the Meet Cute." Wilkins explained. "In romantic comedies, that's what they call the moment when the man and woman first meet." He rubbed his chin, thinking this over. "I don't know, Jack- if she's had her Meet Cute with another man that does not bode well for you."

Then, there’s when they’re standing outside Cameron’s house and exchanging information, and awe, at the bachelorette party game going on inside.

"What do you think the pink bags are for?" Wilkins asked. His voice was filled with wonder.

Phelps stood next to him, similarly wide-eyed and awestruck. "It's a game. Each girl buys a pair of underwear, something she would normally wear herself. The bride has to guess who brought which pair. If the bride guesses wrong, she has to do a shot. If she guesses right, the other girl drinks."

"Cameron was afraid Amy would think the game was tacky, but the cousins insisted, see?" Kamin said.

Jack glanced over. "You guys sure are getting into all this."

Phelps grinned. "When a girl like Cameron talks about underwear, you listen."

"How about you, Jack? Could you do it?" Wilkins asked.

"Twenty pairs of underwear. Think you could figure out which pair belongs to Cameron?"

Jack had been interrogated at knife-point, gun-point, pretty much at all-points a man could think of, but hell if a question had ever made him squirm as much as that one.

Because now he was thinking about her underwear.

"I don't see why I'd have any particular insight into that," he answered gruffly. "Think you could figure it out?"

"No, but I didn't try to kiss her three nights ago," Wilkins said.

Jack glared at Kamin and Phelps. "You two tell all sorts of tales, don't you?" He nodded to Wilkins. "We should get going."

Wilkins shook his head. "No way. We came to show Cameron those photographs, and that's what we're going to do."

Jack pointed to the house. "You can't seriously be thinking about going in there."

Wilkins's eyes sparkled with excitement. "Oh, I'm going in all right. And you are, too, partner."

"You thought that going into a purse was sacrosanct? Infiltrating a bachelorette party is way beyond that."

Wilkins rubbed his hands together eagerly. "I know. And I'll never have an excuse like this again."

"You're an FBI agent, Sam," Jack reminded him.

"I'm also a single man, Jack. And inside that house are twenty gorgeous women who are drinking and showing off their panties. It's a no-brainer." He pushed off the car and headed toward the house.

The heroine’s Gay best friend isn’t a stereotypical Gay Best Friend. Thank you for no mention of “Project Runway,” interior decorating (at least in relation to Collin), or squeally moments. The plot just seemed to flow and I didn’t notice your authorial hand jerking the characters’ strings to get them to move as you want them to. Bliss, bliss, bliss.

The villain isn’t a serial killer! So his POV of course doesn’t lovingly detail how much he likes to kill people. Sure, he did commit murder and does need to go down, but I can almost understand the situation in which he found himself and what made him kill. What’s the saying? Everyone could kill under the right circumstances. Then he stays a professional and methodically tries to cover his tracks. It was almost fun to watch him delve into why the crime didn’t have the outcome he’d expected. Still blissful.

Let me mention again how much I enjoy watching Cameron and Jack work this case. Despite a rocky start…

Before he could call her bluff, Cameron grabbed her purse and headed for the door. The hell with her stuff, she'd get it later. "It was nice catching up with you, Agent Pallas. I'm glad to see those three years in Nebraska didn't make you any less of an asshole."

She threw open the door and nearly ran into a man standing in the doorway. He wore a well-cut gray suit and tie, appeared younger than Jack, and was African American.

He flashed Cameron a knock-out smile while precariously balancing three Starbucks cups in his hands. "Thanks for getting the door. What'd I miss?"

"I'm storming out. And I just called Agent Pallas an asshole."

"Sounds like good times. Coffee?" He held the Starbucks out to her. "I'm Agent Wilkins."

…they quickly start meshing together. They listen to each other, respect each other professionally – now, mull over the other person’s ideas and suggestions and when someone higher on the food chain than the killer is contemplated, there’s no immediate dismissal that “this couldn’t possibly be right.” Cameron does do one slightly silly thing which no one would think might bring a killer to her house one day and because she didn’t go out once and try and track down and bring in the killer, I’ll forgive it. She also ends up doing something Jack calls “fucking brilliant” to aid in capturing the killer. I’m almost in a haze of bliss.

I did end up marking the book down slightly because I just felt the ending kept on going and going. The last chapter felt tacked on and was somewhat of an anticlimax but other than that, this is one book I can totally recommend. A-

This book is the subject of a new Save the Contemporary campaign. Come back tomorrow to hear about the details to win a new iTouch and a bottle of Stags’ Leap Petit Syrah which is a wine featured in the book.

→ Jayne
Previous article: Monday Midday Links: Romance News I Gathered in New York
Next Post: The Value Is Not Just in the Content