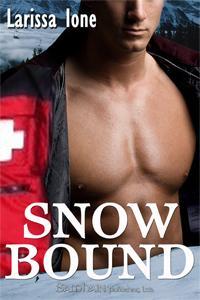 When I finished this book, I felt a bit regretful. In looking at your publishing schedule, it doesn’t appear like you’ll be writing more straight contemporaries anytime soon. Snowbound was a sweet and sexy contemporary that could have easily been published at say, Harlequin, in the Blaze line.   (just for a frame of reference).

Snowbound is framed around the ugly duckling trope which is one of my favorites.   In high school, Robyn Montgomery was fat, ugly, and the butt of cruel jokes and names.   Her parents owned the bakery in a “sprawling, modern mecca for the rich and famous that sat at the base of an internationally renowned ski resort” and Robyn ate food to appease the pain of high school.

Once she graduated, however, she blossomed and ten years later she is the music director of a popular Chicago radio station. She had volunteered to oversee the charity event for her high school reunion wherein she raises a ton of cash, swans around with her semi famous boyfriend, and looks gorgeous while thumbing her nose at all the haters from high school. Her plans hit a serious roadbump when she breaks up with her semi famous boyfriend, a radio personality, and he refuses to fulfill his obligation to be the auctioneer for the charity event.

Sean Trenton is a former Olympic medalist who recovered from an accident and another something more mysterious that affected his willingness to engage in bedroom activities. Sean’s back skiing again and wondering if he shouldn’t break his two year celibacy. Part of the search and rescue ski team for the town but with hopes of possibly getting into the entertainment end of winter sports.

A rush of adrenaline pumped into his system as he tucked and accelerated, heating his body, prickling his skin, his scalp. Yes. This was life, the high he lived for. The ultimate snowgasm. Nothing compared; not money, not cars, not sex.

Well, maybe sex, but not lately.

Sean was well acquainted with how his fame attracted women and “had once considered groupies a perk of being the best of the best.” But since his skiing accident, he’s not been able to bring himself to be intimate with a woman. Getting back on his feet includes getting back in the game and when he spots Robyn at a local bar, he thinks she just might be the one to break the long drought.

Sean and Robyn engage in some fun and sexy flirting that showcases Robyn’s self confidence and hints of Sean’s rusty sexuality. Despite Robyn’s initial brushoff, Sean determinedly flirts with her and ultimately gets Robyn to surrender.

Robyn’s ex boyfriend shows up and promises to help Sean get the sportscasting job if Sean will keep Robyn away from him.   While Sean doesn’t exactly promise anything, their interaction is bound to cause trouble with Robyn later, particularly when Sean is trying to prove to Robyn that he isn’t one of those self absorbed and selfish celebrities.

While the story ends predictably, the journey there is fun and engaging. Robyn learns that her need to prove something to her old high school classmates gives them power that she had spent 10 years reclaiming. Sean discovers that his passion for skiing (and for a woman like Robyn) is undiminished by his injuries and his scars. Both find a sense of renewed sense of life and self at the end of the story. B

This book can be purchased in ebook format from Samhain.