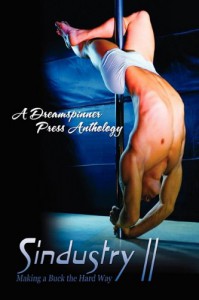 I opened THIS anthology because I liked Sindustry I. But this volume is so obviously all the leftover stories from the Sindustry I anthology that didn't quite make it into the first volume. And most of these stories should NOT have been included. This anthology had very few redeeming stories and some that make me want to puke, which kinda dampens any enthusiasm I might have for the whole. Mostly it's filled with stories with awful, weak, boring, TSTL characters who couldn't characterize their way out of a paper bag, and their ridiculously over-protective and unrealistic saviors. I have never really understood what m/m readers are complaining about when they say that that one of the characters doesn't have to be the woman, but I do now. In this volume, one half of the relationship was invariably the damsel in distress who needed saving, the other the knight in shining armor who knew just how to take care of things, pretty lady-uh, I mean lad. Yech.

"Package Boy" by Connie Bailey
A strange little story about a high-end rent boy who has fallen in love with a client who happens to be the heir to a Mafia family. He hears a hit ordered on his lover while on another call and the rest of the story deals with how he and his lover respond to the news. Told mostly in choppy, untagged dialogue, the conflict is mostly external. The relationship conflict isn't sign-posted very well so I didn't know that it existed until it was solved. The affection between the lovers is genuine and the sex is pretty hot, but there's a bit too much grating, unexplained mafia language. Grade: C

"Dance for Me" by Maria Albert
This story was both so melodramatic it was funny, and so completely disturbing I was sickened. Carlo is saved from an abusive john by Michael, a bouncer at a club. Carlo is barely 21 and has been kept in literal sexual slavery for 7 years, only to have been thrown out by his captor 2 weeks previously. Michael is 43 and lives at the club, which seems to be a kind of halfway house for gay homeless men, complete with Leprechaun-like Irish owner. Carlo and Michael instantly fall in love, but can't communicate enough to actually figure things out without intercession by Michael's boss. Carlo is a complete mess and Michael seems a few cards short of a deck and to have a relationship between them when Carlo is only 2 weeks out of 7 years of abuse and Michael seems emotionally unstable was unbelievably appalling. There's a limit to what can be solved in a novel, let alone a short story. Don't set up characters who need years of therapy and think some sex and a few kisses makes everything all better. Ew. The ending’s even worse, the HEA degraded beyond compare by the creepiness of Michael’s final words to Carlo. Grade: F

"Leather Dancer" by Andrew Grey
Denny is dragged to a Leather Expo by his way-more-outgoing friend. There he sees Robbie, the next-door-neighbor he's been crushing on for months, dancing at a booth. Over the next month, they build a solid relationship. The characterization seems non-existent. Denny is a shy introvert, then he's the driving force behind the relationship. Robbie is an annoying wet noodle who seems to bend to Denny's whim and whatever the story needs him to do. Complete lameness: having Denny buy books from a booth at the Expo that is obviously the Dreamspinner booth, complete with titles mentioned. Stretching credulity: Robbie takes Denny to his father's restaurant on their first date. Boring writing, very little conflict. Grade: C-

"Corona & Lime" by Sonia Devereaux
Jacob hasn't wanted or had a relationship — or even sex — in ten months, since his boyfriend dumped him. Race is paid by Jacob's friends to pick him up in a bar. They go to Race's apartment, but Jacob puts on the breaks and they fight in a very amusing way (to me, at least). The next morning, they find a way to the beginnings of a relationship. The story is told from the point of view of both Race and Jacob as they each feel out their vulnerabilities and find how the other could fix them. Each convinced that the other couldn't want them, the end is sweetly optimistic. Grade: B

"Sunshine" by JL Merrow
I thought Merrow’s story in Sindustry I was one of the best in that volume. “Sunshine” is definitely the best in this. The story is set in England, I presume in London, and replete with British slang. Daniel is a street-walker, Rob a bouncer at a bar who checks up on Daniel on the way home. He takes Daniel home with him once, paying for sex, ruining their tentative friendship and the story tells how they find their way back to each other. Sweet and sad and wonderful. Unfortunately, it doesn’t look like Merrow has any full-length novels yet, just short stories. Pity. Grade: B+

"Night Moves" by Patric Michael
Guy who is NOT a trick spontaneously rescues a hustler and vows to protect and keep him all of his days. Huh? Over-emotional, crying at the drop of a hat, unbelievable love at first sight, out-of-left-field motivations, and generally a story that makes absolutely no sense. And don’t people know that relationship tattoos are incredibly bad juju? They’re a death knell to a relationship, so if characters go out and get one, I’m pretty much ready to chuck the book. Not sexy and romantic, just stupid! (But that might just be me.) Grade: D

"Wanting More" by Cari Z
Alex is a stripper who goes home with a trick, only to be discovered by the guy's long-term partner. He is surprised when the partner, James, shows up at the club 2 weeks later and asks for a private dance. Surprised but thrilled, because he's very attracted to James. They establish a relationship of sorts, with lots of really hot D/s sex, that eventually works into something more. A satisfying development of a wonderful relationship. Although if James didn't learn from his previous lover or from Alex, when IS he going to learn?: a fact which threatens my belief in the HEA. Grade: B-

"The Meaning of Perfection" by Taylor Lochland
A prostitute falls for the owner of the hotel who rents him and his roommate rooms for their jobs. Julian, the hotel owner, takes payment in kind from Felix's roommate, which makes Felix very jealous because he wants to be the one servicing Julian. He eventually gets the chance, only to have Julian reject anything more in the morning. They eventually find their way back to each other, and poof! Felix quits whoring. Um, yeah, not so much. Grade: C-

"See Me, Feel Me" by Zahra Owens
A stripper takes a private gig for a friend, only to be wined and dined by a blind massage therapist, who does his own, unofficial sex work during his business. A fun little read, but the length of these "short" stories sometimes leaves me feeling like the story could be 2000 words shorter. Very little conflict and merely a progression of the relationship ensues and while that's enjoyable, there's no incentive to keep reading besides some moderately enjoyable sex-‘nothing's at stake. Grade: C+

"Exposure" by Marguerite Labbe & Fae Sutherland
Whoa, hello head hopping! Give me whiplash, why don't you! Ahem. That aside, this was a surprisingly hot story about a photographer introducing one of his models to a little bit of BDSM. The instant attraction between the two made me roll my eyes a bit, but then I was completely sucked in to the sexual and relationship tension between the characters and was very happily following along until the photographer called the model "Pretty baby." That just stomped on all my squick buttons and pulled me right out of the story. I could tell that it was still hot in the same way it was before, except every time "pretty baby" showed up again, I'd get squicked all over again. Except for that, very enjoyable, and very very hot, very well-written D/s sex with a little bondage thrown in. Grade: B

Looking through the whole, now that I'm done, there's quite a few more Bs than I thought there were. But still, the awfulness of "Dance for Me," "Night Moves," and "The Cowboy and the Movie Star" overshadows the good of "Exposure," "Sunshine," and the quirkiness of "Corona and Lime." Skip this volume unless you can find those three stories separate.

This book can be purchased at Amazon or in ebook format from Books on Board or other etailers.