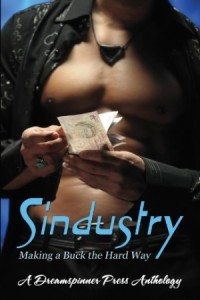 I only opened this volume when Dreamspinner sent it to us because Madeleine Urban had a co-written story in it. I adore her longer co-written stories with Abigail Roux, and the volume started off with “Reluctant,” so I thought I’d have a great little story and then skim through the rest. Instead, “Reluctant” was truly awful and the rest of the stories saved me from chucking the volume off my computer.

At 332 pages, this is a seriously hefty volume (electronic, of course). And with only 12 stories, that’s between 25-30 pages a story, much longer than the usual short stories crammed into an anthology. This gives enough time to actually flesh out the characters, plots, and themes. Or time for the story to move from blah to boring and awful.

The theme for the volume is sex industry workers: both low- and high-end prostitutes and strippers, mainly. What was fascinating to me more than anything was how each story used the sex industry angle-‘as a meet-cute, as conflict, as a moral failing, as a perfectly legitimate profession, with or without comment. I’m strangely fascinated by this particular profession and by how the HEA is achieved or dealt with in light of the prostitution. I also love to see whether the prostitution itself is the conflict or just part of the story with conflict elsewhere. This volume certainly gave me enough to work with.

"Reluctant" by Rhianne Aile & Madeleine Urban
Gregory is recently divorced because he thinks he’s gay. His doctor (!) gives him the card of the high-end prostitute he employs and Gregory makes an appointment. He gets his first blowjob and a refund, then makes a "real" date with Rico, who has fallen in love with him. Considering this is the first story in a volume about sex workers, its complete lack of any exploration of the actual sex work and the effect it has on both worker and consumer is a glaring and incomprehensible error. Rico falls for Gregory. Why? No clue. Gregory falls for Rico because he’s hot and gives good head, apparently. No discussion at all of whether Rico will give up his very well-paying job, no discussion of anything besides a naughty meet-cute and some sex. Fail all around because even the sex was boring. Grade: D

"Stripped Bare" by S. Blaise
Luca is intrigued by the voice of the man calling to book him for a stripping gig for his sister’s hen party. Told in the first person, Luca chases a curiously reluctant Ethan until Ethan gives in a meets him, revealing his physical disabilities. I loved Luca’s relentlessness and his optimism as he works on bringing Ethan out of his shell. The conflict was of the "I can’t believe a gorgeous stripper like you would like someone like me" variety, but although there was nothing earth-shattering, it was a fun little read. Grade: B-

"Boomerang" by Rachelle Cochran
Chance works at the club Boomerang, moonlighting occasionally as a rent boy. He waits on a table with his old high school crush. They meet again and, after overcoming his uncertainty about Evan’s sexuality, Chance dives into a relationship with him. A nice, gentle, sexy story, in which Chance’s rent boy status is pretty much a non-issue. Grade: B-

"Fun and Games" by Lenore Black
I adored this sweet little story. Patrick is a video game designer, working the final kinks out of a game weeks before release. He’s not perfectly sculpted and toned-‘he’s a dork and kind of soft around the edges. His friends buy him a prostitute for his birthday, just so he’ll get laid. But Jack keeps coming back, "the gift that keeps on giving." The connection between the characters, the fun they have and the affection between them makes this a gem of a story. Grade: A-

"How Could I Not" by Jamie Freeman
A complicated little story. Ben is set up on a job with Josh, a rich older man who wants Ben to fuck him while they watch a video montage of a guy who looks startling like Ben. Josh becomes a once-a-week client for Ben and they slowly build a real relationship. This sounds a little creepy, but the writing and the characterization is strong enough to make me believe in the romance. But then we drop a whole grade for "No condoms, just pull out." Give me a fucking break. Grade: B-

"The Frost Affair" by Sasha Skye
This one’s a little different, in that the sex worker is not a rent boy, but the kept lover of a senator. The senator is trying to spice things up a little in their love lives, to make sure Grayson isn’t bored with his older lover-‘which means the sex is pretty hot and frequent. I enjoyed this story, although I spent the whole thing hoping that the Senator wasn’t one of those who was against gay rights but banging his boy on the side. But I did notice an entire lack of lube and some ATM action (Google it, but beware, NSFW), which just kinda grossed me out. Grade: B-

"The Stripper and the Hairdresser" by Bethany Brown
Can we have some conflict, please? Something to overcome? Something to make the characters grow? Something to draw the characters together. I mean, I know that most real-life romances are just "two people meet, are attracted, fall in love, and have a HEA/HFN." But romance stories need a plot with a dark moment, to have any impact whatsoever. This story is indeed "The Stripper and the Hairdresser" and that’s pretty much is. OMG boring. Grade: D+

"A Muse" by Zahra Owens
Ack! Second person narration: "You are very direct and the guy who recommended you to me had told me that." I don’t know why people do this. It might work for the author to write hir masturbatory fantasy in 2nd person, but it rarely works for the reader. First person can edge into bombastic and egotistical, but when you add second person too, it all gets a little too much for me. And seriously, "androgynous, but manly"?! You can’t have it both ways-‘you really can’t. And please, do some research: "suddenly grateful for high-end digital cameras with state-of-the-art screens that don’t require me to peer through tiny viewfinders and miss ninety percent of the action": uh, no-‘high end digital cameras require you to look through the tiny viewfinder. Trust me. It’s the cheap ones that use the screen. All that aside-this is an interesting story about a fine art photographer luring a rent boy into being his muse which I would have liked very much if it weren’t in second person. Grade: C

"Fin de SiÃ¨cle" by S. Reesa Herberth
The only historical story in the anthology, this is an amazingly well-written glimpse into the turn-of-the-century encounters between an artist and a prostitute in Paris. Gabriel becomes Jean’s muse and they tentatively establish a relationship. The atmosphere and feeling of the story are brilliantly done, melancholy yet optimistic. And I actually like that although Jean and Gabriel find their way to each other by the end of the story, there is no talk yet of Gabriel giving up prostitution. Very well done. Grade: A-

"Chat Line" by Clare London
The conceit in this story was unoriginal, carried on too long, and almost embarrassing. Jerry calls a sex line, thinking it’s a line for a company that provides domestic help. The miscommunication goes on for pages longer than its funny, moving far into boring. The phone sex is pretty hot, but the "I want to meet you after one paid-for conversation" was a little unbelievable. Grade: C

"As Beauty Does" by JL Merrow
A professor-student story that doesn’t squick me! Very English set, Nathan, a rent boy, has a regular blow-job customer every Thursday night. He discovers the guy is his English professor in one of his new classes, which makes things a little uncomfortable on Stephen’s regular nights. After Nathan is bashed and ends up in hospital with a broken jaw, he and Stephen begin to establish a relationship. Great story, fabulous characterization. I especially love the use of the characters’ own language choices and words to indicate who they are and how they feel: you can tell that Stephen is very definitely a staid English professor, Nathan a working class student, just from the way they talk. Grade: B+

"The Four Seasons" by Diana Copland
This story is so unrealistically suspend-all-disbelief, it’s just yummy, because wouldn’t it be great if the world were perfect like that? Law student Michael endearingly hits on a beautiful man in a hotel bar, but is gently turned down because Christian is a very high-end prostitute who tells him to call when he’s made partner. 5 years later, Michael sees Christian on a corner, selling blowjobs for $50 a pop. He takes Christian in, finds out how and why he sunk so low, tells him he’s worth something, a la Pretty Woman ("The bad stuff’s easier to believe" moment), and they make beautiful love. Michael, of course, wakes up alone. 3 years after that-.well, you’ll have to read the story, but everyone ends up rich and happy and fighting for gay civil rights. It’s deliciously over-the-top but the affection and relationship between Michael and Christian is very well done. Grade: B

Overall, I enjoyed the anthology. Some stories definitely stuck with me ("Fun and Games," "Fin de Siecle," and "As Beauty Does" especially and none were truly horrific-‘they were just boring, more than anything else. But I have a strange fascination with rent boy/male prostitute stories, so my fetish is well-fed and happy.

This book can be purchased at Amazon or in ebook format from Fictionwise and other etailers.

→ SarahF
Previous article: POLL: Is it important that you can pronounce character names?
Next Post: REVIEW: Til September by Jana Richards