REVIEW: Silent on the Moor by Deanna Raybourn 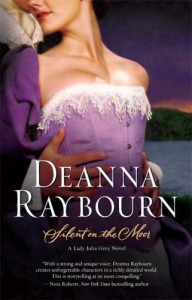 After reading the second book in the Lady Julia Grey mystery series last year (I’ve since bought but still not read book one) and quickly learning that there was to be a third book, I was eagerly anticipating it. And bless you, you didn’t let me down when I pulled out our copy and dove into it. Murder, death, investigations and sticky situations abound as Lady Julia and Nicholas Brisbane circle each other like wary cats. Will they finally get their HEA? Frankly I did wonder.

Book two, Silent in the Sanctuary, left Lady Julia planning on how to crash the decorating party at Nicholas’ newly purchased estate on the Yorkshire Moors. He’d asked her sister, Lady Portia, to assist him but specifically ordered Portia not to tell Julia about it. Which didn’t stop Julia from discovering what was afoot. Now she and Portia, along with their youngest brother Valerius who was ordered by their father to accompany the two young widows, are headed, along with two maids, three pets and innumerable trunks and bags, into the hamlet of Lesser Howlet. The two ladies think they’ve reached the back of beyond until they finally make their way to Grimsgrave Manor. It is at that point that they know they’ve finally reached it.

Dank, dark and depressing about cover the adjectives needed to describe Brisbane’s new home. Julia and Portia are appalled. When they discover that the ladies left from the noble family that formerly owned the estate are still there and living on Brisbane’s charity, they are taken slightly aback. But Lady Allenby and her eldest daughter, Ailith, seem pleasant enough, even if they’re fixated on their ancient lineage while the youngest daughter, Hilda, strikes the March sisters as gauche.

It doesn’t take long for the ghosts to be stirred up, the secrets hidden in the house to begin to rise and the wuthering to loom over the windswept moors. Death has been done and unless Brisbane and Julia watch their steps more will follow. But can they uncover the murderer in time or will evil win the day?

As with “Sanctuary,” “Moor” slowly unfolds the story, gently leaving clues for the reader to pick up, turn over, contemplate and fit into the puzzle. Everything isn’t laid out in order and some things will be mentioned early in the book which will play a role much later on. And it isn’t just the actions of the living which influence the story but also of those long dead. The sins of the fathers do come back to haunt the next generation in this story.

I couldn’t help but think of Emily Bronte’s sole work of fiction while reading “Moor.” It’s set in Yorkshire, has a half-gypsy hero, there is madness and death, with angelic/demonic characters. Outsiders, including me, are horrified at what goes on there yet it makes a kind of sick, twisted sense.

Only one of the secondary characters will die by the end of the story yet there are old murders and deaths which Julia and Brisbane will solve or uncover before the madness finally ends. I had half guessed what the ultimate horror would be yet my mind still sought other possibilities to account for what Julia discovers. It’s just too awful. Yet it also brought to mind a degree of the ghastliness that has been front page news for the past year as well as ancient practices carried out in the society studied by the now dead Allenby heir.

One thing that did annoy me slightly is the fact that Brisbane and Julia are hardly together for the first 150 or so pages. And when they are finally together, it’s mainly so that Brisbane can hold Julia at arms length or order her to leave. It was only after Brisbane’s gypsy aunt gave Julia some sound words of advice that I finally settled down wait the relationship out.

It saddened me to see two relationships that didn’t work out in the story. I agree with Julia that it will take great courage for Hilda to strike out on her own yet I applaud her for doing so. She’ll finally get what she really wants and that’s to get away from the Moors and the memory of her family. What happens to poor Portia is just devastating. As Brisbane said, he regarded them as the happiest couple he knew yet not even all Portia’s money and influence can stand against society and what Jane feels she wants more than love.

It delights me that you can manage this series so as not to give away what happens in either of the first two. And though I think it helps to have read them so as to gain a greater appreciation for the characters, it is not necessary. New readers can start with this book and work their way back just fine.

Is this the end of the journey for Julia and Brisbane? If yes, I feel it’s a great trilogy that ties up most, though not all, of the plot threads and character arcs. If no, then I’ll look forward to watching these two in action again as well as revisiting the eccentric March family. And I hope that Brisbane does replace that lovely lavender and lace corset on the front cover. B+

The Sony Store is selling The Lady Julia Grey Bundle which are all three books for $13.96. Given that Silent on the Moor is a trade paperback, that’s essentially getting three books for the price of one.