REVIEW: She’s Got It Bad by Sarah Mayberry 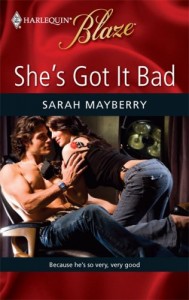 Jane has given some of your books rave reviews and since Jane knows her contemporary authors well, I was looking forward to trying you. The tattoo artist heroine working her hero into a sweat then enjoying some hot sex sounded like just the book to try.

Liam’s had a hard life until he gets taken in by the Ford family. Which all changes the night Zoe Ford takes her courage in her hands and offers herself to Liam. Which almost breaks Liam. He owes the family too much to take her up on it and regretfully realizes he has to leave.

Twelve years later, Liam discovers that Zoe is now a tattoo artist who sings in a thrash band at night. Determined to help the young woman he knows he still cares for, Liam barges into her life, offering her a job at his wildly successful custom bike shop.

It doesn’t take their smoldering passions long heat up. But is there more for these two than one custom build-off bike, hot sex and a kitten?

First off, I love the tattoo artist and the bike builder. What a great use of contemporary occupations. Miami Ink and LA Ink along with Orange County Chopper have brought these to the forefront. At least Liam and his workers don’t bicker like the OCC father and son duo.

After watching these custom bikes built, I’m not surprised at the effort that goes into this specialty market. And I’m constantly amazed at the detail and workmanship that are lavished on these one of a kind creations. I would like to have seen a little bit more of the bike building in the book since it’s so important to who Liam has become in the 12 intervening years. But it’s a perfect way to bring Zoe’s art together with Liam’s business.

I’d also like to have seen more of Zoe as the tattoo artist. Though I don’t have one myself, several of my friends do and one has told me a lot about what went into her selection of her tattoos and about the woman who owns the shop where she got them.

Zoe and Liam are both wounded people who feel inadequate despite what everyone around them tells them. What’s the saying, it takes 10 words of praise to make up for one critical one? Liam was bullied and beaten by his drunkard father and had to watch his mother be treated even worse. He’s afraid he’ll never be good enough or that he’ll become his father.

Zoe acted out after Liam rejected her youthful advances. She allowed herself to be used by a high school sleaze then suffered from lifelong changes wrought by the experience. Since then, she’s felt worthless. Her “Vixen” persona does allow her some sexual power over men thereby letting her regain a little of what she lost when she was 15.

I did like that when Liam shows up at the tattoo parlor, all set on “saving” poor Zoe in his guise as a Do-Gooder, she tosses his offers back in his face and tells him what he can do with them. I do get tired of the heroines who’ve been done wrong by the hero who melt at the first sight of him even if it’s years later. Bully for Zoe that she doesn’t fall into this.

The only way I could accept Liam’s highhanded interference in Zoe’s life was because 1) he really did want the best for her and 2) it was a way for him to deal with the martyr feelings he still has for leaving her without a word all those years ago. If not for this, I’d have gotten a little pissy about how he would run roughshod over her stated desires as to what happened in her life.

I was bummed that Zoe wasn’t that true rarity – a real bad girl. When she first throws Liam out on his ass then heads off to play at the thrash club, I was excited. Zoe drinks. Zoe has sass and attitude. Zoe teases her music fans and demands what she sexually wants from Liam. And then we learn that she only does this to mask the pain of her empty life, blah, blah, blah. I wanted her to be a tattoo artist and sexually provocative singer just because she wanted to be.

There are some great scenes in the story such as Liam’s losing his mind when Zoe offers herself to him the first time. Like any older teenage boy, his brain heads downwards. Ditto Tom’s reaction to the news that his best friend has the hots for his sister. Punches are what I would expect and what I got.

Zoe helps Liam fight off his fear and feelings that he’ll be just like his dad. She realizes that she can’t just keep telling Liam that she loves him and knows he would never hurt her or anyone else. It’ll take more than words to overcome a lifetime of his feeling inadequate and apprehensions. She gives him the best gift she can by finding his father and urging him to confront the man. I think Liam truly needed to do this in order for these two to have a HEA. But does Zoe ever confront her own feelings of emptiness?

I’m not a fan of martyrs or of characters who immediately throw in the towel when the HEA of a lifetime is at stake. Liam is both of these. Like Zoe, I wanted to shake him til his teeth rattled. I’ll cut him some slack since he did have a horrible childhood but unfortunately, this book didn’t live up to what I’d hoped it would be. I liked the cat, though. B-