REVIEW: Shaking off the Dust by Rhianna Samuels 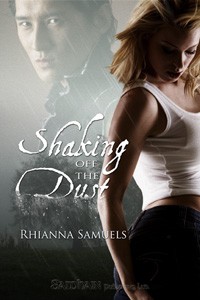 This book has a great beginning with a different plot. In a book world overpopulated with vampires and werewolves, it was something totally new to me. You give us interesting characters – a flawed heroine, a Japanese hero and Tom, who’s a ghost. It starts wonderfully and then, unfortunately, goes totally overboard by the end.

Hannah is standing at the graveside of a doctor she’d worked with when something weird happens. A wind blows up and scatters his ashes, which she breathes in, right as lightening strikes. The next thing she knows, she’s in her own ER, being treated for her injuries and seeing things. A ghost specifically. Tom’s ghost. Once she realizes she’s not going off the deep end, they both start to work out what’s happened and what it means.

Tom’s best friend, Professor Takeshi Shimodo, thinks Hannah is nuts when she shows up at Tom’s house where Takeshi is staying while he clears up Tom’s legal business. It takes a while to convince him, but finally he believes what she, and Tom, are telling him. Hannah is in touch with Tom, who wants help from both of them to discover who was behind the plane crash that killed him and several other innocent victims.

Hannah soon learns that Tom isn’t the only ghost she can communicate with, something that interests law enforcement agencies who desperately want her to help them solve cold cases. By hook, crook or force, they’ll get her cooperation even if it almost kills her. Takeshi, Hannah and Tom have to stick together, as it were, to save Hannah, solve the crime and put several ghosts to rest.

Hannah’s sassy but wounded, an ER nurse who’s got a shell around her emotions to preserve her sanity with the cases – good and bad — that she sees. Okay, fine. But she has deeper emotions as shown by reaction to all the ghosts and children’s ghosts. Great. But I got sick — really sick — of her mouth. Every confrontation ends with her either sulky and pouting — and not in a good way pouting – mad, yelling at someone who she’s supposed to care about, or running away. Yes, she’s had reasons to run because of her past — her previous boyfriend throwing her out when she was pregnant then losing the baby — but Takeshi has tattooed that he loves her on his body, he takes care of her in every way all throughout their travels and in any situation — he repeatedly tells her he loves her both in public and private, his best friend is telling her that Takeshi loves her and he’s never seen the guy this way — and she still keeps trying to deny her love and push him away. By the end of the book, if I were Takeshi, I’d be beyond ready to throw my hands in the air and say what will finally convince you?

I see that you’re an ER nurse yourself. I’ve heard health care workers are the worst about submitting themselves to doctors and medical treatments but really, why does Hannah keep fighting the doctors? I know she doesn’t want to stay in the hospital – and with the food and the fact that she works in one and knows what goes on I can see why but sweet mother Mary, her heart rate is in the 190s (not good, normal is half that or less) She needs to quit being Super Woman cause she ain’t! I will say that her reactions to injuries and loss in others shows her as a caring and compassionate nurse. Brava for all the nurses out there who put up with all kinds of crap on a daily basis.

The ghosts were a great angle at first. Hannah can see and hear Tom. They might solve a terrorist plane crash. Wonderful. And then the ghosts started piling on. Ghost after ghost after ghost…and Hannah has to hear all their problems then solve all their problems and heal all their wounds. It got to be too many, way too many and by the end, I was shaking my head and groaning instead of being touched by it all. Same with plot. The terrorist aspect was more than enough with no need to heap all the rest (saving the children, releasing all the ghosts into the light, bringing closure to everyone) onto it. There just got to be too many characters to keep up with. I remember reading that there’s a number of how many characters in a TV show or movie who people can keep up with before they begin to lose track. This book tops that number.

Hannah gets beat up, kidnapped or otherwise harmed about every 50 pages. Again, I got to where I was starting to laugh at yet ONE MORE instance. How many times can this woman end up in the ER? Too many. And as for Hannah’s last medical condition — well, hasn’t she read any romance novels? I’m poking gentle fun at this outcome.

I felt there was too much description of things which aren’t important to the story. Each and every person had to be described along with Hannah’s reaction to them including how cute she thought each man was. And for a woman who doesn’t want her business known by everyone, she sure was ready to poke her nose into other peoples affairs and match make.

Takeshi is a saint. I guess the fact that he’s willing to put up with Hannah’s surliness shows the love is genuine on his side. Now if only Hannah would believe it. Thanks for not having had him in love with his ex-fiancee. I would have wondered that the man could think himself in love with her. But he’s almost too good to be true. Yes, this is a romance novel but still – he never seems to get mad at Hannah unless she’s acting stupid and endangering herself, he puts up with all her snide comments, her many sarcastic moments, and her insecurities for the whole book. I got tired and I’m sure a real flesh and blood man would have too.

I felt the book really needed some tighter editing and went on far too long with too many side and subplots. I lost interest in a lot of them at the halfway mark and skimmed much of the remainder of the book to finish it. It has a fabu cover though which is really what sealed me wanting to read this. Samhain has got some great cover action going! I can see that this issue — communication with those who have died and the resolution of left over issues from both sides — is very important to you. I just wish I had liked the way you presented it better than I did. C-

as an ebook from Samhain