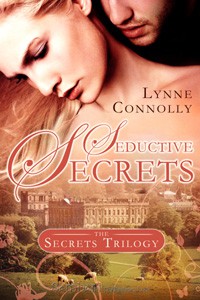 As always, I look forward to your Georgian historicals. In the past, I’ve found them entertaining, informative, moving. When Samhain offered us their new releases, I eagerly snapped this one up. Unfortunately, it doesn’t work for me as well as most of your past historical books.

Has your hero Nick Seyton not heard the old phrase “Don’t shit where you eat?” If not, then he certainly knows the general reason why someone coined it by the time this book is over. I can understand that he was devastated when the woman he loves elopes with another man on the eve of their wedding. But…I mean, who has a sexual affair with one’s own cousin’s wife? And this is while he’s busy boinking half the female population of England by the sounds of it. Mention is made of one poxed old man and I can’t help but wonder if Nick’s insides are a roiling brew of bacteria that can cause the nastiest of infections.

Okay, so now after the death of Isobel’s husband, Nick has a chance to regain the love of his life. Go Nick and ‘cheers mate’ that he persuades her. But am I the only one who finds it slightly creepy that he falls in love with her when he’s twelve and she’s eight (only the book incorrectly states her age as 10 but that doesn’t fit in with the other ages mentioned)? A twelve year old boy falling in love? With an eight year old? Sorry, and this might just be me, but that icks me out.

Well, we all knew what was coming with Isobel’s first husband. Henry gets turned into the worst kind of Romance First Husband – the uncaring homosexual who can’t even manage to get it up to at least deflower his bride before beginning to ignore her while at the same time destroying her self-confidence. I find myself agreeing with Mrs. Giggles’ assessment that Isobel, despite all the good reasons you give her, is way too needy. Half of her bedroom encounters with Nick tend to end with her dissolving into tears and casting herself on his manly chest as he vows to help her, soothe her, love her, whatever her.

Isobel does manage to stick up for herself in the area of household management with sharp preemptive strikes against her cold, hoity mother-in-law. Too bad it’s just chickens and servants she seems to be able to deal with. You tell us that she’s perfected a cool, unemotional front for society due to both the scandal of her first marriage and the cruelty of her family yet she lets villainess Mariah and her sidekick Judith get to her on a regular basis. I guess because this is the first time she’s falling in lurve.

And by the way, where was her family – nasty pack of vultures – for a week at at time? They try to extort more moolah out of her before the wedding and then suddenly drop from sight. Were they out trying to pilfer the silverware? Brava that Isobel knows them for what they are and isn’t going to put up with them or their sponging. Plus her mother needs to be shot for not telling Isobel anything about what to expect on her first wedding night. Please don’t tell me that Hugh’s commission is going to send him to the American colonies. Ship his ass off to the Caribbean and let him get yellow fever.

Nick’s friends – Severus and Peter – are, no doubt, the subjects of the other two books in this trilogy and the way you’ve set them up should led to some – ahem – interesting stories. What is it with politicians who think they’ll be able to boff whomever they want and no one will ever find out? And make that a double if the boffing involves members of the same sex. I am looking forward to seeing what you’ll do with them. However, I am appalled that Nick tells them the intimate details of Isobel’s first marriage. Surely there was a way to elicit the information he needed from his two friends without that. I hope Isobel never finds out as it would make future meeting with them rather awkward.

The details of the estate and Isobel’s duties as lady of the house were the most interesting part. I had to laugh when Nick manages to piss of both his wife and his mother over who’s in charge of the house. Yet, at times, these came off as rather dry. I wish we’d seen more of her hobby of chicken raising. Perhaps this will be explored further in future books.

As far as the villains went, Mariah was pretty much a one note character. Evil, seductive, oversexed whore. You tell us that she wanted the best for her children and cared for them yet she and Duncan lived full-time at Nick’s estate while their children were either in school or at their estate. Even for removed 18th century parents, this sounds like abandonment to me. The killer is just such a sad, pitiful POS. But what happens to him? Was a decision ever made? If so, I missed it.

All in all, I found “Seductive Secrets” to be a disappointment. It has melodramatic dialogue with lots of !!, a hero you use the word obsessed with to describe his feelings for his heroine, a heroine who turns martyr at the end -and wouldn’t letting Nick divorce her cause even more scandal? -and villains with little depth. I hate to say it but this one gets a C- from me.

→ Jayne
Previous article: REVIEW: Into the Shadow by Christina Dodd
Next Post: REVIEW: After the Kiss by Suzanne Enoch