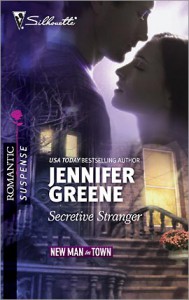 Even though I’ve enjoyed other category books you’ve written, I don’t think I’ve ever tried a romantic suspense book of yours. So when I saw this offered at eharlequin, I decided, “why not?” At first, I thought it might buck my so-so luck with this genre. That is until the end when the heroine…

“It’s not enough that Sophie Campbell discovers her neighbor’s body. His dead ringer has to show up at her doorstep. But this man’s no ghost…the instant attraction that sparks between them is all too real.

College professor Cord Pruitt wants answers about his brother’s murder. The woman downstairs must have seen something. But when Cord lays eyes on Sophie, all he wants to do is take her in his arms and protect her. With a killer on the loose, and all signs pointing toward Sophie as the next target, that’s just what he will have to do….”

I like Sophie Campbell. She’s a sort of “girl next door” literally as well as figuratively. She’s not one of these knockout looking women who only need to remove their glasses and they look like a supermodel. In point of fact, even after the hero sees her as his ideal woman, and without her changing her appearance at all, the rest of the male world still just doesn’t get it when it comes to her looks. And she likes cats. And she’s intelligent but without immediately figuring out the crime because, after all, that’s not what she does for a living. I would like for the story to have delved a bit more into her research but I guess that would have taken away from the main story.

Cord – oh, what a name – is ex-military (though it was once mentioned that he did a stint in the Air Force and later he called himself a former Marine) and has been around the world ducking trouble a time or two. So when he catches on more quickly to the implications of his brother’s murder and how Sophie might be involved, it makes sense. I was amused at the way Sophie initially baffles him and enjoyed watching him be flipped end over end by her. His reaction to her attack seems like a typical male reaction – anger at the fact that he wasn’t able to take care of the one he sees as “his woman.” But I liked when he confronted Sophie about hiding things from him and demanded honesty from her. I just wish that he had been totally honest with her by then as it would have shown great movement forward in their relationship.

The police stuff has some holes in it or at least it seems that way to me. Why would the police not have taken Jon’s computers with them? They wanted to take Sophie’s. And since when do people get to pick and choose when they hand over evidence to the police in a murder investigation when the police know the person has said evidence? It also seem to take quite a long time for the police to eliminate potential suspects from their list.

But in spite of the issues I have with some of the police stuff, I was still prepared to grade the book higher until Sophie decides to confront a potential suspect. True, it’s done in public but she certainly took a high risk with no back up just on a hunch. Then when the killer does confront her, Sophie just opens the door. WTF? Sophie’s lucky she didn’t end up as murder victim #2. The motive behind the killer’s actions makes sense, though as does the deductive reasoning Cord and Sophie try to employ to work out what caused the killer to act on that particular day.

The move from “who are you” to “I love you” is swift but I guess it’s due to the heightened emotions Cord and Sophie are under. I like that the epilogue isn’t a smaltzy wedding scene 1 month later. Bonus points for not trying to introduce both of Sophie’s sisters – and future heroines – into this book and for having Cate’s appearance limited to what’s needed in “Secretive Stranger.” I just wish Sophie hadn’t gone and lowered the grade with her actions. B-