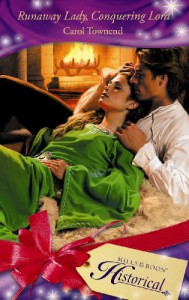 I’ve enjoyed several of your other books for Harlequin Historicals and was delighted when you contacted me offering a copy of your latest in the “Wessex Weddings” series for possible review. (Note: FTC discloser out of the way!) And the heroine is a Fallen Woman too. Even better. At first I didn’t realize that the hero is the same man used as a decoy in “An Honorable Rogue,” but once I recalled this, it upped the incentive to read the book.

Oh, how the mighty have fallen. Four years ago, Lady Emma of Fulford would never have thought she’d be sorry to lose her livelihood – washing dirty laundry in an icy cold river – that puts clothes on her back and a roof over her head. But then she also never thought she’d have an illegitimate child or not be living in her father’s noble household. A love affair gone bad has landed her where she is today and that somewhere is desperate to escape the abusive father of her child who has somehow tracked her down.

Her appeal for a job to the garrison commander of Winchester, Sir Richard of Asculf, initially gets her nowhere. They have a bit of a history since he’s a BFF of Emma’s brother in law, Adam, who was awarded her father’s lands. Richard takes a little pleasure in seeing her in such reduced circumstances since Emma apparently made life difficult for them after the Battle of Hastings fallout but he’s also honest enough to admit that she stirs his sexual interest. Not that he’s going to lay a hand on her as Adam would nail him for it.

But with Judhael making threats against her and terrified that he’ll discover the fact that they have a son, Emma is pushed to offer herself to Richard as a mistress with the hope that he’ll take her and her son with him when he returns to Normandy to settle an inheritance. Can these two find love as well as sexual feelings for each other during the journey?

I like a good medieval and am glad to see the subgenre making a bit of a comeback. But for me to be interested in it, I need more than the standard Norman knight (who’s usually a bastard) and willowy Saxon maiden snipping at each other in faux medieval dialogue. I mentioned before how much I appreciate the fact that you avoid this but let me say it again to emphasize how much this means to me. No “mayhaps!” No “tis, twases!” No irate Jayne!

I haven’t read the first book in the series “The Novice Bride,” but I gather that Emma is quite changed since then. Several mentions are made of how her viewpoints on various things have changed since her days as the daughter of a powerful Saxon thane. At this point, she’s taken refuge in an inn with several ‘ladies of the night’ and far from looking down her nose at them, she thinks of them as friends. She’s even tickled pink when they show up after her wedding to wish her well. She’s practical and not above doing what it takes to see to the safety and care of her child.

Richard is shown to be human. He’s a man who can appreciate Emma’s curves and who is also not adverse to enjoying, just a little bit, seeing her pay a bit for her past actions. But his honorable side quickly comes out on top and he goes to great lengths to help her and feels guilty when they succumb to passion. I figured some revelation was coming to explain his nightmares and at first rolled my eyes a little that a big Norman knight would be so anguished at what bothers him but then thought again about how any warrior might take a particular death hard and be haunted by it.

The book is also a bit of a road romance and I enjoyed reading about the journey conditions. Definitely not modern traveling with ‘en suite’ bath included and one can forget having any privacy. You handled some aspects of the story differently than I expected which in this case is a good thing. When a potential wife for Richard is mentioned, I had images of catfights and outraged foot stomping to dread but thankfully this didn’t come to pass. When Emma imagines she feels someone watching her during their trip, I thought of several scenarios involving showdowns between the men. Again, you took a different path.

Emma’s venture towards “please don’t go there” territory alarmed me somewhat. True, she is given one good reason but I would have preferred that she ask before she acted. And let’s be honest, Judhael displays more common sense about her choice of action than she did considering she also has the welfare of her child to consider.

“Runaway Lady, Conquering Lord” – and can’t we just tell this is a Harlequin title? – is a fairly fast read and is quite readable, which I consider to be two different things. It stays away from many of the subgenre’s conventions and features two likable lead characters. I think readers interested in medievals will welcome it to the list. B-