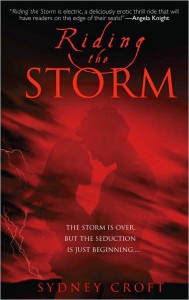 Remy Begnaud is a man who can affect the weather. The why behind this is not fully explored and therefore never discovered. It’s a gift or a curse, depending on whom is rendering the opinion. Haley Marie Holmes is a scientist for ACRO (Agency for Covert Rare Operatives), an secret organization made up of individuals who have special powers. She is sent to study Remy Begnaud and recruit him for ACRO before the evil Itor organization filled with its own mutants, err people with special powers who do evil instead of good.

ACRO is headed by a reclusive figure, Devlin O’Malley. He provides a “safe haven to Special Ability types in return for their helping to keep safe the world at large.” Devlin is blind but has special powers enhanced by his blindness. He’s not quite the parapalegic telepath that is Professor Charles Francis Xavier of the X-Men, but similarities between the X-Men world and this story is quite strong. There is even a reference to X-Men:

But ACRO had found itself a new operative, an X-Man, of sorts, providing Remy accepted their offer.

Devlin and ACRO help operatives hone their powers much as the Professor trained the original five teenage mutants and others including Storm, a mutant who could control the force of weather, to harness their powers. In essence, Riding the Storm read as if it was highly inspired by the referenced comic book.

There is a short secondary storyline featuring Annika and Creed, two other ACRO operatives who are inside Devlin’s childhood home attempting to communicate with a ghost.

The trouble is that the paranormal world was not fully developed other than the links to sexual act and desire. There is actually science behind the theory that people are affected by the weather. Every person has a different chemical makeup and can react differently in terms of electrical response. Some scientists posit that is why some individuals can sense water better than others. Their bodies are actually the divining rod, not the stick or tool they wield.

If there was more science explored behind the paranoramal aspects, the otherworld aspects would have created a more believable escape. At the least, I was looking for an explanation as to why some people had the special abilities and others did not. What creates the tension? Is it nothing more than a rock-paper-scissors game wherein everytime ACRO and Itor Corp fight, the outcome might be different and its all left up to fate? Or are the ACRO operatives just better, stronger fighters than Itor. I.e., ACRO gets all the great Special Abilities and Itor gets the also rans?

The sex even bothered me because to a large extent all the sex scenes were driven by supernatural forces (i.e., the weather or the ghosts) rather than the characters’ own feelings. There was a weird sexual compulsion that seemed to be taking place. Remy is turned on by the weather, by Mother Nature, and to some extent, he must have sex during strong weather patterns. Creed decides that he and Annika must have sex to achieve a desired outcome with the ghosts.

The secondary storyline between Annika and Creed was not integrated at all with Remy and Haley story. It was as if two separate stories were written and then storyline scenes were alternately placed to elongate the book. There was no cross between the two. I.e., how did the ghost/ghostly apparitions fit into the storyline that dealt with Remy’s struggle with his relationship with Mother Nature.

I think that the secondary storyline was an attempt to capitalize on the formula of success developed by Suzanne Brockmann and JR Ward where the insertion of a strong continuing secondary character romance can increase anticipation for a forthcoming book. To that end, I think Riding the Storm was somewhat successful. Devlin certainly has secrets and Annika and Creed’s storyline is completely left hanging so that if the reader was engaged by that story, she would surely be on the lookout for the next one.

The sex is hot and well written in the story and I do know that is difficult. There is a plethora of scenes involving nearly every main character to please nearly every fantasy imaginable including a male on male bondage scene. For me, though, the derivate but not fully explored paranormal world and the compulsory nature of the copulations made it a difficult read. D.

Riding the Storm can be purchased at Amazon or in ebook format at Books on Board or Fictionwise.