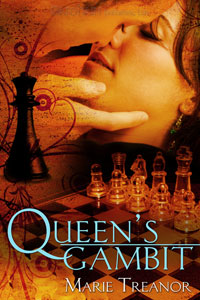 Ever since I read a historical of yours during one of our old ebook contests, I’ve meant to pick up another. It’s taken me a while but when I saw this offering from Samhain, I jumped on it.

Christi Blythe works nights in a bar in a small hotel in the Highlands of Scotland. And it’s here that an unusual contest is set to take place. Two chess Grand Masters will play five games for a prize of  £10,000. But why here, everyone asks? Well, no one quite knows for sure why the Russian Andrei Zuvarin has chosen this as the site for his rematch with Englishman James Garrick. But as Christi works the bar, pours drinks and watches the much needed money flow into her boss’s till, none of the staff are complaining.

Against her will, she begins to fall for this tall, flamboyant Russian who seeks her out twice during his first evening at the hotel. And then when they meet later than that, an explosive sexual attraction leads them together. But Christi refuses to hope that Andrei could be The One. After all, they’ve only known each other for 2 days and there’s not a chance he’d even believe her story much less be willing to fulfill the terms of the curse laid upon her so many years ago. Would he?

Well, of course he would but you had me wondering how Andrei would go about doing so and still save another person dear to him. I was almost afraid it would turn into a Sophie’s choice or a life on the run until Christi sees a way, from her lower-at-the-time vantage point, to turn the tables on the Russian mobsters.

With a short story length, every word has to count and you make them do so beautifully. The book packs a lot of emotion – laughter, joy, grief, longing, sorrow and ultimately a love true enough to be willing to sacrifice all for the one dearest to you.

Though we find out in the end that this isn’t quite love at first sight, I was actually willing to accept not only instant lust but second day love as well. And to top that off by falling hook, line and sinker for Andrei’s belief in the supernatural – well, he did discover its reality with incontrovertible proof. Andrei’s also one smart cookie to figure out a way to beat the curse using Christi to effect her own escape.

Yet, if Christi had not learned from what caught her in the paranormal spell, I would have been left with a niggling sense that she had been given something that she didn’t deserve. As it is, she’s had time to ponder what she did and the thoughtless actions of years ago. When she says she now understands the pain she caused another, it makes her willingness to give up her hope for happiness mean that much more.

And all without a single dinnae or cannae or mention of sheep or kilts. Okay, you did use lassie once and perhaps throw in wee but no other faux Scottish brogue which so often makes my teeth hurt.

You make me believe in these two, their feelings for each other and their future joy together. And all in a paranormal story! Good show. B+

→ Jayne
Previous article: WINNERS OF GIVEAWAY: Hard and Fast by Erin McCarthy
Next Post: REVIEW: The Conqueror by Kris Kennedy