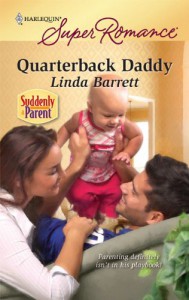 With a title like “Quarterback Daddy,” it has to be a Harlequin. No offense to Harlequin and I like this better than most of the “Presents” line but I hope that non-series fans can look past this to the good book this is.

Alexis Brown would never have contacted pro-football player Dan Delito about her niece – and his unknown daughter – if her back hadn’t been to the wall. But the expenses of her murdered sister’s funeral plus all the baby stuff needed for Michelle added to Alexis’s low paying position as a district attorney have depleted her resources. Her first impression of Dan isn’t a good one but she’s not to know that this is the second anniversary of his wife’s death.

Dan’s immediately suspicious of this woman and her claims that he’s the father of this child – after all he is a major sports figure and pulls down an impressive salary – but he and his attorney treat Alexis’s claims with all due seriousness. And when the DNA results confirm he’s a father, he takes on the responsibility maturely. But he doesn’t have a clue how much these two females – one 3 month old and her aunt – will affect his life and his future.

I like a lot of things about this book. Alexis and Dan are level headed, smart, intelligent people and – Glory be – they act that way. Alexis has reservations about Dan due to her family history with an alcoholic but she doesn’t immediately harsh on him and is willing to give him the benefit of the doubt. It does take her awhile to finally believe in his sobriety but given what you’ve built into her background, that does make sense.

Dan is shocked to learn about his daughter but – much as it makes them look bad – he’s a well known sports figure with hordes of groupies hanging around and sometimes a condom will break. He doesn’t deny the possibility but does act sensibly to be sure no one is pulling a fast one on him. He’s also cognizant of how the media will descend on the story and moves to control that as well.

The research you’ve done on NFL football is well done and smartly worked into the story. Since the main emphasis of the book is on Dan and Alexis it makes sense that football is used to show how it affects Dan’s private life and how it will influence Alexis’s view of him rather than the sport taking center stage. Fans of New England will be happy to see their Patriots vie for another Super Bowl, even if it’s only fictional. I also like how Dan’s mother has her own way of deciding whether or not it was a good game for Dan.

“He looks good,” said Rita, eyes glued to the screen. “Dirt doesn’t count. He walked evenly and his eyes are focused….”

Which is saying something after a defensive line has been trying their best to sack you for the whole game. I think readers who don’t follow sports and or American Football won’t feel too lost in the story though.

When Dan’s family is introduced, I thought “Oh, dear here we go with another tight-knit Italian sports family” but the Delitos turn out to be solid people, concerned about their son/brother/uncle, welcoming of the newest additions to the family and thrilled that Michelle and Alexis are pulling Dan out of the depression he’d been in. They add a nice touch to the story by showing Alexis what family life should have been for her rather than what she grew up with.

Dan’s interactions with Michelle are fun to read and not because they’re all turned into “aw shucks that’s so cute” moments or become comic pratfall scenes for him. At first he’s hesitant with her as would be anyone who hasn’t changed diapers or dealt with spit up but he gets the hang of it. But I think you show the growing feelings and joy he has for his daughter.

Dan and Alexis take some time to get to know each other before diving into bed. I guess you could say it’s plotplotplotsex. Dan makes a promise not to push Alexis for anything physical and then sticks to it despite being tempted. It was nice to read a story in which the hero and heroine don’t give into mindless lust after knowing each other two weeks. I was glad to see that Alexis makes sure about Dan’s reasons for asking her to marry him before she says “I do.”

Though I felt that these two were growing closer emotionally as well as physically by the end of the book, I was surprised at the issue you revealed about Alexis’s past given how I had thought it was discounted by something she told Dan earlier. This is a major event in her life and is obviously still affecting her, and though I’m glad she’s going to deal with it as the book ends, it seems like something that a significant other would need to know and I’m not sure when Alexis would have told Dan if not for his own revelation.

I was also never quite sure about why you’d made Alexis be a ringer for Dan’s dead wife. But after reading Jane’s opinion piece “Is there Really a Second Chance at Love in Romance,” this bit from Dan eased my mind.

“No one, Ally, should settle for being second best. Not you, and not me. You’re right about Kim and me having a great marriage, a wonderful relationship. It’s exactly because of that marriage that I know what I’m missing — and I want it again! …And with you I would not be settling for second best.”

I’m a long time fan of NFL football so it was nice to read a story using the sport as a backdrop. But even though it features a sports hero, the relationship takes priority here. Despite a groaner of a title, I’m glad I read this one and now I’m on the look-out for other books you’ve written. B

Fictionwise | Books on Board