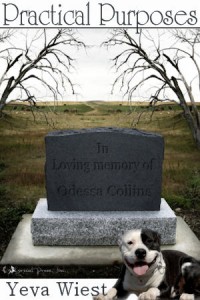 I have Mrs. Giggles to thank for clueing me in to this black comedy. Though I don’t think it’s quite as side splittingly hilarious as Mrs. G finds it, it is quite funny. I do agree with her statement that it’s the Coen brothers meets small town Texas meets gay comedy. As well, it’s best to check your PC hat and coat at the door before settling down to read it.

The opening scene is one of the funniest, as well as one of the most descriptive, I’ve read in ages. Little 84 year old Miss Odessa, camped out in her brown recliner with her shotgun laid across her lap as she waits for the sorry ass bastard who’s trying to sneak up on her in the dead of night to steal her Social Security money. Her dog Bucky snapping and snarling as he yanks at his chain to get loose. Miss Odessa calling out, "You want my check, you white mother-fucker? Then you better have the balls to come and get it!" right before she blasts away with the double barreled shotgun and, uh, puts an end to Jeff Lawton’s career in crime. I was truly sorry to have her presence in the book end with the collapse of her roof after Bucky pulls the porch column loose in his attempt to nail the second thief.

But then things got really interesting as Odessa’s brother, a cold bastard if there ever was one, notifies his disgraced son, the doctor, of her death. But James Cole, MD turns out to be just as strong a character as his father, the Ag teacher at the local high school. James faced up to his father’s disapproval of his gay lifestyle years ago. He’s quite happy with his transplanted NY Irish Catholic lover Zachary O’Boyle though not happy at the thought of the funeral to come. What with having 14 Baptist ministers in the family (“Fourteen Black Baptist Preachers! Someone could either get saved or he could get himself killed, and Leopold Pricewater had a good idea which fate might be awaiting James Cole, Jr. and his queer doctor self.”), he knows he’s in for a hell of a lot of censure yet even he can’t imagine what’s in store for him when he arrives in Salem, Texas.

Yes, indeed. James Cole, Sr has a welcoming party waiting for his son, even if he doesn’t bring “that white boy” with him. And it’ll take the combined skill and bravery of Tallulah Pricewater – who can fix any plumbing problem and yearns for the driver of the weekly Dollar General delivery truck, Donnie Burke – who’s highest ambition ought not to be more than a store manager at the Dollar General, Mrs. Dollie Cole – who has the strength to love her son and be happy he’s found his soul mate as well as a keen aim with a gun and Zach O’Boyle (“Zach rarely called his mother, but on Thursday morning he decided it was high time. For one thing, he needed fashion advice. What did an upwardly mobile homosexual Irish Catholic wear to his black lover’s aunt’s funeral in a small East Texas town called Salem?”) who has the foresight to buy a handgun – for Practical Purposes – even if he doesn’t know how to load it.

She pulled Zach into a hug and patted his back like he was her little boy.

"Calm down, son," she said in her soft southern lilt. "We can’t find James if we lose our minds, now, can we?" She shushed and patted. Finally, Zachary calmed down.

He looked around the room and at his companions. They were certainly a motley crew. A retired schoolteacher with a gunshot wound on her shoulder, a weird guy with coke-bottle thick glasses and very yellow teeth, a butch lesbian with an attitude, and himself-‘Mr. Fashion with Gucci shoes and a gun he didn’t know how to shoot.

There are some POV shifts that might have been better handled, though I was never at a loss as to which characters were in a scene, and some other technical issues listed by Book Uptopia Mom that it would have been nice to have had cleared up and taken care of. But as a rip roaring, nonstop tear through small town bigoted USA of 1977 – plus guns – I’ve never seen its equal. But one question. Did Tallulah ever hook up with Lena Mae?

This book can be purchased in ebook format.