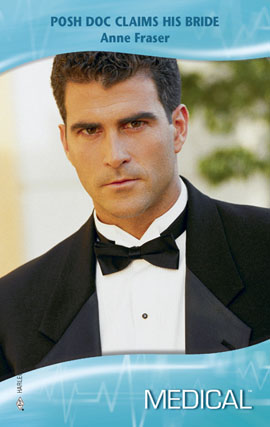 Jane stated her intention of stretching her Harlequin boundaries so I decided I could yank mine a little more as well. Jane loves the “Presents” line but asshole Mediterranean heroes crossed with blonde doormat heroines just isn’t my thing. When I saw your book listed in the “Medical” line, I thought I could give this kind of story an attempt without all the features I can’t stand. And the wonderful title “Posh Doc Claims His Bride,” sealed the deal.

When she accepted the locum position as a GP on a remote Scottish island, Meagan Galbraith didn’t expect to meet the man she thought dumped her after their magical meeting seven years ago. But there he is, Dr. Cameron Stuart, still as sexy and heart stopping as he was back then. Though she tries, somehow! she just can’t resist him or not respond to him!

Cameron always meant to contact Meagan but fate forced his hand – in marriage – with a woman he knew he didn’t love. As the only two doctors on Uist, they’ll be working closely together. Can they find a way to a HEA after all this time and heartache?

Wow, who said being a GP on a small, remote Scottish island would be a walk in the park? Whoever did, lied to Meagan because you make this woman earn her respect from the islanders the hard way. An emergency c-section, an emergency flood rescue, an emergency helicopter ride to a swamped fishing boat then keeping it from going under for two hours followed an emergency appendectomy in addition to the general humdrum every day stuff doesn’t sound like an uneventful month long locum job to me. I shudder to think what medical care was like before air rescue could swoop in and save the day.

When you gave Meagan’s age as 19 and stated that she was just finishing medical school, I stopped and said, “whoa.” 19? Then I checked with an English friend of mine and asked do UK medical students really start that young? Unless Meagan is some kind of female Doogie Howser, I have to doubt that she could finish med school by 19 and have done her training and two years service with Doctors Without Borders by the time she’s 26. Really, really doubt it.

One of the strong points of the book is the setting. And it’s beyond obvious that you’ve spent a lot of time in a similar one and know the people and place well. The residents here seem like down to earth, hard working, fun people. Even though Meagan didn’t enjoy their cheerful grandstand view of her arrival, slip sliding through the mud, I laughed as they called out advice to Cameron as he plucked her from the peat. And I would adore some of the scones that seem to litter every table for miles.

I also like the fact that the book was published in the US complete with the British English spellings – oedema, paediatrician, foetal, etc. I hate it when spellings get “Americanized” and the feel of the book is changed by eliminating Britishisms. If the setting of the book is somewhere in the UK, then by God make the book sound like it. Points for Harlequin here.

The reservations that Cameron has about Meagan make sense beyond the usual plot line that calls for the hero to doubt the heroine. Meagan is young and hasn’t as much experience as a GP (primary/family medical doctor for us in the US) as he does. But at times his second guessing her got on my nerves. After she managed to deliver the baby and not lose the mother, I would have felt like smacking him when he initially insisted on performing the appendectomy, especially considering who the patient was.

I just don’t get that Cameron’s ex-wife Rachel would have so easily gotten custody of Ian. Maybe years ago but Cameron is the one who is closest to home while she’s about to start on what will probably be a jet set modeling career. Plus he can offer the stability of long term roots in the community. Cameron needed to have got hold of a good solicitor.

There’s a kind of soap opera feel at end. Meagan does stand up to Cameron a little but then it starts to feel like she’s tipping towards martyrdom. And she gives in to his proposal after only one night of thought. Yeah, she’s still in love with him and he with her but must the ending and dash for marriage be this quick? “No, we must wait, I must have time. Ooh, enough time passed after 10 hours, I’ll give in and say ‘yes’ since you’re going to keep bugging me until I do.” I wasn’t fond of

While I don’t think I’m going to follow Jane into her love of this style novel, at least this one has a Scottish laird/doctor instead of a Greek/Italian/Spanish tycoon. And estate/death taxes have taken a chunk from the family moolah. It was a treat to read a book so grounded in “place” instead of one with only a lite coating of its setting. B- for “Posh Doc Claims His Bride.”