The Nook Simple Touch with GlowLight™ (hereinafter the Nook GL) is the first e-ink reader with a built-in light since the Sony 700. The Sony was a great idea, poorly executed. Since then those of us who read in bed or in other places with low light have had to make do with clip-on lights, lights with built-in covers, or bright lamps that annoy the people around us. I’ve tried all of the above, in many variations. I read after The Husband has gone to sleep on a regular basis. I’ve always been a night-time reader, for as far back as I can remember (flashlight under the cover? check). Not having found a satisfactory e-ink solution, I usually read on my phone, but I don’t love it. So when the Nook GL was announced, I decided I had to have one. This decision was made easier by the fact that I left my beloved Sony PRS-T1 on an airplane, so I was without a 6″ e-ink reader for the first time in years. And despite having a 5″ phone screen and a tablet, I really missed the e-ink screen and the light weight of the Reader.

I have owned three generations of Sony readers starting with the 505 (and I still have a Daily Reader), a Kindle 2, and a Kindle DX. The one-click link to Amazon you get with the Kindle is wonderful and addictive, but I vastly preferred the Sony hardware. It had to be that good, to make up for the horribleness that is the Sony Reader bookstore. I’ve never owned a Nook, and until now, I never thought I would. After trying unsuccessfully to purchase a Nook GL in a store (I tried across three states!), I ordered one from the B&N website and received it in 3 business days, as advertised.

It came in a sturdy paper box, all of which can be recycled. And there was a charger and USB cable, which I appreciated. The charger for my Nook Color started to fray within months, but this cord is put together differently and look sturdier. The connecter is a mini-USB, which makes it compatible with a lot of phone, camera, and other electronics chargers. 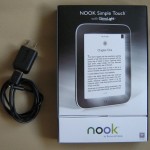 The device is light, apparently even lighter than the regular Simple Touch, at 7 ounces. By comparison:

The Nook GL looks exactly like the non-GL version of the Simple Touch, except that the border is a slightly lighter gray. There is the same raised “n” below the screen on the bezel and “nook” above it. 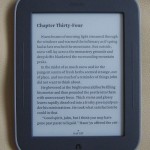 There are two thin, raised lines on the right and left sides of the screen which can be pressed to turn the pages as an alternative to tapping the touch screen. They can be programmed so that you can choose whether the bottom two or top two page forward/back.  The power switch is at the center top on the back, and the micro-USB port is on the center bottom. There is a slot for a micro-SD card, which can expand the 1GB of available storage up to an extra 32GB, if you want to carry several libraries around with you (it comes with 2GB, but you can only access 1GB).

And that’s it. There’s no headphone jack because there’s no way to play music or audio files. There’s no text-to-speech function. It’s just a reader with wifi. Which, in some ways, I find really appealing. You can’t do anything with this device except read.

Since the screen is the same pearl e-ink that is on all three ereaders now, I compared the screens in bright sunlight (click to enlarge): 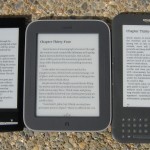 To me, the Kindle screen has the most contrast, but I think that is as much a function of the type (which is darker and more pronounced) than the screens themselves. Engadget’s review reported that the contrast was slightly degraded from the Simple Touch. I can’t confirm that, but the GL seems slightly less contrast-y than the Kindle. But it was almost indistinguishable from the Sony to my eyes.

And in lower but still readable light (click to enlarge): 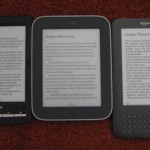 And finally, the whole reason for buying the device: What about the Glow Light? Short answer: I love it. Yes, you can see the little light beads at the top, especially when the light is turned up to the brightest level. 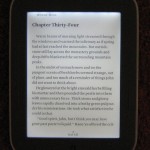 But at the levels I use (25% to 70%), the slight unevenness wasn’t a problem. With the lights off in bed, I use a low light setting. In dusk-type light, I use about a 50% setting. In both cases the light distribution is far superior to any lighted case or clip-on light I’ve used, and it’s definitely easier and more comfortable to hold. It’s a huge improvement and to me it’s worth the $40 premium over the Simple Touch.

Even though I have had a Nook Color for almost two years, I never used the B&N bookstore and I rarely used the interface (I rooted the NC into a tablet as soon as I got it). The learning curve is very short, because there’s not much to learn. The bookstore is as easy to search and buy from as Amazon, although the discounts aren’t always as good and of course the KDP books aren’t available. The wifi works fairly well; I have trouble keeping a connection in one room of my house, but I can’t be sure that’s the Nook’s fault. It works fine everywhere else.

Unlike the Sony, the Nook doesn’t appear to import and sort using Calibre’s tags, but I quickly used the available “shelves” option to sort my books. I wish there were a way to access my dropbox Calibre folder directly from the device; I’m used to sideloading through Calibre, but for people who aren’t, the Nook is a little more work. On the other hand, though, you can put ePubs on it from a variety of stores, so readers can take advantage of non-Amazon sales and coupons.

I also subscribed to the New Yorker, and I’m surprised at how well it renders on the Nook GL. There are a lot of magazine subscriptions available and they are quite reasonable.

Finally, a trivial but deeply satisfying feature: in addition to all the faces of authors, the Nook has the option of “nature” screensavers. I vastly prefer these. Even in black and white, a photo of a waterfall is infinitely more soothing than having Emily Dickinson staring glumly at me.

I bought this device entirely for the front-lit screen, but I’m surprised at how much I like it in other ways. The rubberized coating is very comfortable to hold, and I’ve grown used to the square form factor. The bezel is a nice size for my hands and the page turning clicky things are comfortably located. The screen is quite responsive to touch, and the device is light. Overall, I like it almost as much as the Sony I lost.

I broke down and bought a case to protect the screen. The Nook cases are far bulkier than Kindle or Sony cases. It transforms this thin, light reader into a small hardback. But it’s still small enough to stick in my purse, and when I’m at home or reading it’s easy to pop out of the case.

I’ll be curious to see what Amazon’s front-lit Kindle looks like; I assume the technology will be slightly different since B&N has a patent pending for the GlowLight technology. If you don’t care about the light, there’s probably no reason to switch or upgrade what you have now. But if you find yourself reading in dim light a lot, or at night with the lights out, this innovation is very welcome.