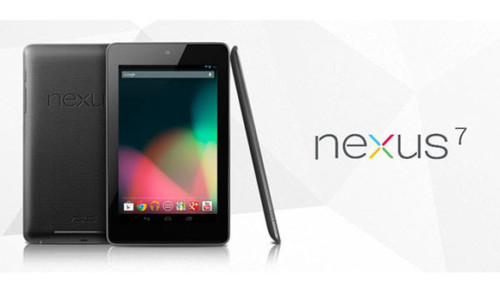 This past week I suffered a traumatic incident when I fumbled with my phone and it fell to the tile in my bathroom.  That’s what I get for trying to brush my teeth and read my emails at the same time.  I thought I was okay but then discovered the face of my screen had cracked.  I admit I might have gotten a little teary eyed.

As I was contemplating exactly what I was going to do to fix this, I wondered if now was the time to switch to the Android phone.  Angie James had done so, making the change from an iPhone to a Galaxy Note 2.  Sunita has the original Samsung Galaxy Note.  Both devices have something in common.  Their screens are really large.

Ned thinks I’m crazy to want a larger screen but I carry around a purse or some kind of pocket book at all times.  The size of the phone isn’t going to deter me. It’s a feature, I tell him, not a bug.

But while I searched the benefits and drawbacks of switching over, I stumbled across the Nexus 7 (a device I briefly encountered when I was drafting up last week’s post).  While I was able to repair the cracked phone screen for $49 (thank god for Apple Care), I ended up playing around with some Android devices, both the Samsung and the Nexus. You can’t tell in the photo how much better the screen on the Nexus versus the iPad Mini but it is. The text is crisper, the pictures more real. 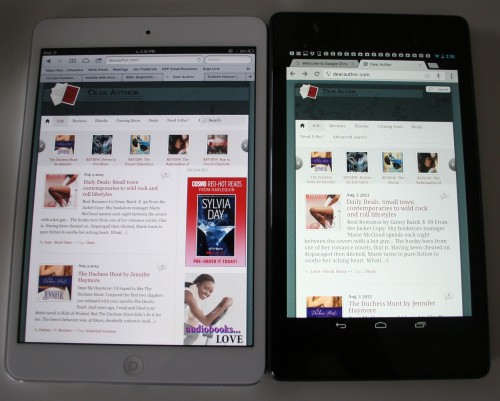 I was immediately struck with how amazing the Nexus 7 screen was and after leaving the store, I kept thinking about it. Finally, I justified the purchase of one by saying I could give it away on Dear Author.  But having played with it, I’m kind of reluctant to give it up.  Folks, this is a really cool device.

Before I talk about my impressions, let’s look at the specifications between the Nexus 7 (2013) and the iPad Mini. 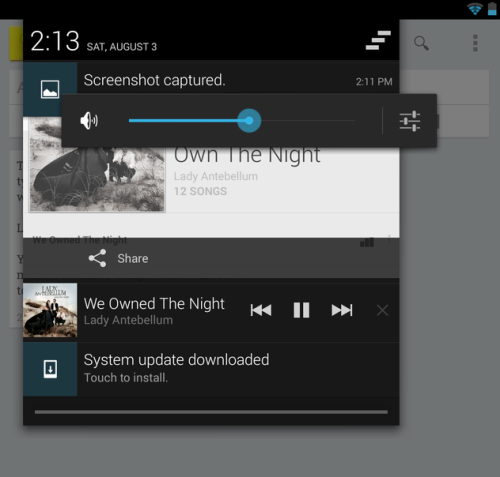 Another feature I really love is widgets.  Widgets are short cuts to Applications or other system functions.  On one screen you can have your calendar widget, email widget and direct dial widget along with your clock so you can easily see what you have to do and what messages you have at a glance.  The direct dial widget allows you to create a speed dial button on your home screen for your most frequently used contacts. You can also create a similar widget for your favorite text message recipients.

One of the drawbacks I read about moving away from the iOS was the complicated setups that phone companies put you through.  This is not the case with the Nexus 7 although it is not as seamless as the iOS devices I own.  When Nexus 7 starts up, you are prompted to select the country or language you wish to use and then you connect to the Internet. After you’ve connected to the Internet, there was a system update and I had to go through selecting the country and the Wi-Fi connection again.  From there it asked me if I had a Google account. I do but I have two step authentication turned on and this required me to enter my password whether one time and access my authentication program for the correct code. once that was completed,  the system restarted once again.

For reading, there are a few great reading Apps. You can peruse Brian’s list here that he updated just last month.  I particularly loved that with Monanto and Kindle, I could use the volume button to turn the page.  While I liked the ability to highlight and makes notes with the Adobe PDF App, I hated that the App showed a little gray box on the lower left side that showed the page number. It was highly irritating and I wouldn’t use the App for that reason.

I’m not a big gamer, but other reviews tout Nexus 7’s polygon interface. I have no idea what that means but yay?  I play Candy Crush.  Unfortunately being able to see candies more clearly on the Nexus 7 didn’t make me any better at the game.  It only made my disappointment at failing to advance, yet again, highlighted with brighter clarity.

But because Nexus allows profiles, I can make sure that no one else is trying to waste the lives on my version of Candy Crush.  And I can limit what apps are displayed if my daughter would use it.  Each person using the tablet to set their own profile up and thus have their own homepage and collection of Apps.

Finally, the Nexus 7 has a great feel to it. As you can see by the side by side pictures, the Nexus 7 is narrower and slightly longer than the iPad Mini.  The back is a grippy rubber texture v. the smooth metal back of the iPad Mini. Because of the smaller screen size, Nexus 7 shows you the mobile versions of websites at times.  Depending on your preference, the larger size of the iPad Mini might be better suited to your reading habits.

PDFs, ePubs, and Mobis are easy to read. Movies look great and the sound is okay. I read in other reviews that the Kindle Fire HD still has the best speakers of any tablet on the market.

There are a few drawbacks to the Nexus 7.  First, the higher resolution screen isn’t taken advantage of by all apps, meaning that some of the apps visuals will look fuzzy and less clear.  Second, The biggest drawback for me is that I have a lot of iTunes music and I watch a lot of Amazon Prime stuff. Neither of which I can do on the Nexus 7.

Even though I’m reluctant to give it up, it seems like the perfect giveaway for August.