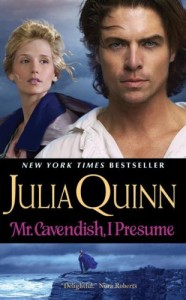 I didn’t start reading your books until the publication of the second Bridgerton novel. The hoopla surrounding it was impossible to miss. Once I’d finished it, I had to go back and read the first book and then each of the following books in the series. My favorite remains Colin and Penelope’s story. As I read each novel after book four, I noticed that my enjoyment dimmed slightly. Not by much but, yes, there was a downward trend. But at eight books it was a lengthy series and such is to be expected.

I wasn’t thrilled with the book that came next, Miranda Cheever, as shown by my C+ review grade. But I heard that this was an older manuscript you’d pulled out, dusted off and polished up for publication while you worked on two all new books. So, okay I was still willing to keep reading your novels. And with “The Lost Duke of Wyndham,” at first it looked like you and I were sympatico again.

But even though my final grade for “Duke” was better than “Cheever,” I couldn’t help but notice that certain aspects of the writing style were beginning to stand out as annoying for me. When I began to read “Mr. Cavendish,” what had been slightly annoying in the later Bridgerton books and vastly irritating at the beginning of “Duke” became something I couldn’t overcome. Namely, the over bantering dialogue. It’s like the book is trying to be a 30’s sophisticated movie on steroids.

The circle blathering, mental and verbal, is enough to drive me insane. You didn’t used to write this way. I’m sure of it and Jane feels the same way. I made it through the last book because it seemed to die down after about the 1/2 way mark but this time, I’ve had it. I just can’t take it anymore. As Amelia and Thomas jibbered on to each other, talked over each other and repeated each other, to me, literally ad nauseum, I ended up huffing (at my ereader) “just bloody well get the *&^[email protected]# on with this scene.” They didn’t. At which point I fumed,” Shut up. Just _shut_ up!” To no avail.

Then Amelia heads off in mental la la land so often that the other characters often have to yank her back and tell her what they all said during the 5 minutes she was off in space.

It wasn’t just the craft that didn’t work for me but the story as well. There’s the hook of this book. Namely, that we see Thomas and Amelia’s PsOV for the events that were covered in “Wyndham.” I was curious and admit to looking forward to watching you handle this. I also liked Thomas a great deal in book one but in this one, he was more a snotty nosed brat for much of what I read. Amelia had her moments as well. At the start, I had thought this could prove interesting- hidden depths and all – but then she began to annoy me too.

As for the dual plot told from different PsOV, nah, didn’t work too well. Maybe if I’d enjoyed the actual writing style used for the story, then it could have. But endless yammering + same plot = annoying –> nuts.

I hope that this isn’t the parting of ways for me and your books. And obviously your writing style is still working well for tons of readers so I have no expectations that you’ll change it. Perhaps a fresh plot will rejuvenate my interest but alas, for “Mr. Cavendish” it’s a DNF.