REVIEW: Mother of the Bride by Caroline Anderson 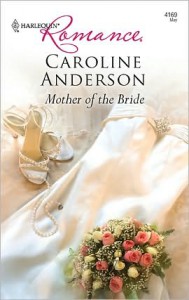 If not for a list of editors’ recommendations for upcoming Harlequin books, I might have skipped past this one. Let’s face it, the blurb is fairly generic yet might lead one to believe that this will be all about the Scottish castle and Rob’s Lairdness. Plus it makes Maisie look like the primary one interested in a new HEA.

Mother of the bride catches the bouquet!

With just a few months until her daughter’s wedding, Maisie feels butterflies at the prospect of seeing Jenni’s dad, Rob, again after so many years.

As parents of the bride they’ll be hosting the wedding party at his stunning Scottish ancestral estate, and watching as their daughter says “I do.”

Whether it’s nostalgia or wedding planning fever, Maisie’s beginning to wonder, can she convince Rob that they have another chance at their own happily-ever-after?

Instead, it’s a contemporary look at lost love and second chances that skips any sugary sweetness.

Since Jennie and Alec are (obviously) already in love, you left yourself plenty of room to concentrate on fanning the flames of Maisie and Rob’s past relationship and getting them back together. If you’d tried to cram in any brand new found love along with the wedding planning, it would have been too much. As it is, there’s a nice balance between Rob and Maisie learning who the other is now as well as deciding on flowers and the wedding menu.

I laughed at the sticker and wedding planning shock that Rob undergoes. Typical male who thinks this can be thrown together in one day vs Maisie who knows from her work that so much goes into The Big Day. I’m always a sucker for a “finding the wedding dress” scene and the fact that, despite their past history, Maisie cares enough about Jennie’s relationship with her grandmother to suggest letting Helen be the one to buy the veil, and for Jennie to pretend to find it while those two are out shopping.

Loved the English and Scottish settings but also loved how it wasn’t turned into Brigadoon. Rob is the Laird but he’s low key and doesn’t make much of it. He treats it more as duty and a bit of everyday rather than acting Lord of the Manor. The comment that Ardnashiel was always a work in progress struck a chord with me. My 60 year old house is always a work in progress so I can imagine a centuries old structure and what it would take to keep it going. You make clear the everyday aspect of how much time and effort Alec and Rob put into the business that keeps the estate solvent.

I also like that not everything goes perfectly for Rob and Maisie now. He says a few unthinking comments about her work and has never taken the time to view her website while she still has negative thoughts about going up to Ardnashiel and has to be treated with kid gloves around his mother.

As for what happened to end their first relationship, I appreciate that Maisie has actual reasons for what she did – it wasn’t all in her mind that Rob’s parents didn’t like her. Nor was her loneliness and the change in their relationship once Rob got back from Naval duty. And Rob too can justify his not going after her. Each saw things their way and were perhaps to young to try and view the issues from the other’s POV. Plus as he says, she didn’t have the guts to tell him her plans face to face. That would hurt. However, I can’t help but think that they should have done all this talking 20 years ago rather than wait so long. They certainly don’t seem to have any problems talking once they get going now. But I guess this is to show how much they’ve matured over the years and even if they had talked then, they still might not have been able to get things worked out. Oh, a big thank you for having Rob believe what Maisie tells him about his parents and for having him stick up for her now, though again it’s a shame they didn’t talk when the events actually happened.

As you move their reconcillation on, Rob and Maisie don’t give into mindless lust though they have lots of opportunities. There are issues to be worked out and I’m glad they take the time to do it right before falling into the sack. But I’m aware that this might not be a popular way to handle their relationship and even I got impatient towards the very end. But the buildup of feelings is nice to actually see in a book for a change rather than “let’s just get a leg over.” It’s definitely not plotsexplotSEX. After our recent posting about how many people skip sex scenes, here’s a book without that problem as there’s no sex. There’s the remembrance of past sex but in terms of the past relationship rather than current situation. And Jennie follows in mother’s footsteps and stays a virgin. Kind of nice to see this.

I’m glad I delved deeper into this book than I might have without any recommendation to boost it. It’s one that offers something different which I’m always on the lookout for. Yes, the conflict ought to have been resolved years ago when it happened but at least Maisie and Rob talk now and make sure that things are worked out before jumping back into marriage. And that earns it a B-