REVIEW: Mistletoe and the Lost Stiletto by Liz Fielding

For a moment, I thought that this was part of some Harlequin series with the set up that the heroine loses one red stiletto and finds her HEA from it. Then after checking, I realized that “Mistletoe and the Lost Stiletto” is not part of the same series as another book I read recently called “If the Red Slipper Fits.” Oh well, I enjoyed them both. 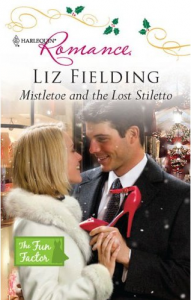 Lucy Bright is living a modern day Cinderella story. The head of the corporation where she was working as a drudge for a week has fallen in love with her and it’s a whirlwind tweet and Facebook countdown to their fantasy wedding after which Lucy will head up her own brand of Lucy B stores. She’s a media sensation and on top of the world.

That is until Lucy accidentally gets her hands on a file which exposes everything. Furious and acting first before thinking, she creates another type of media frenzy before fleeing into a London snowstorm and taking refuge in the upscale department store of Hastings & Hart.

Nathaniel Hart has never believed in love at first sight but the moment he sees the pretty blonde fleeing up the staircase at his store something clicks into place. Nat doesn’t know who or what she’s running from but he’ll do whatever it takes to help her. Now, can he convince this unknown woman who’s hiding out as an elf to take a chance on another retail guru and possibly their HEA?

What a fun little book! It focuses mainly on Nat and Lucy and manages that elusive thing for me: making me believe that a hero and heroine have fallen in love within 24 hours of having met each other. It is fairly short even for a category yet it’s like a Christmas bon bon – delicious and satisfying all at the same time.

Lest anyone think this is a book about an asshole CEO, you make Nat a darling. In fact he’s so great that I wonder that no other woman has scooped him up til then. Yet I also like the fact that though he’s lost in love before, he doesn’t take the fact that Lucy momentarily – just momentarily! – reminds him of *her* to get all angsty nor to immediately project that woman’s faults onto Lucy and be willing to think the worst of her. Lucy is her own woman to Nat and he already treasures her for who she is.

Lucy might have come off as an idiot for not realizing that she was being set up but I think deep in the hearts of most women, they want to believe that there is a Prince Charming out there ready to sweep them up and turn them into a Princess. And Lucy is honest with herself and Nat about what’s happened. Plus she also doesn’t keep thinking that Nat is like her oily, lying fiance once she gets to know him and sees how hard he’s working to help her.

I like that Nat and Lucy have fun together, laugh together and trust each other. No one suddenly turns into a shit to add drama to the story and Nat even finds a way to avoid the impending explosion that would hurt not just Lucy’s former fiance and his business but hundreds of innocent people who would have suffered because of his actions. Bravo Nat!

So here’s another book to help get readers in the Christmas mood. It makes me buy into ‘faster than a roller coaster’ love, is sizzling without the use of sex scenes and inspires me to believe that there are Prince Charmings out there. B