Note: It will be hard to totally avoid spoilers in this review. Dr. Sarah read and recommended “Mexican Heat” back in February but it’s taken me this long for a spare moment to check it out. Hot action, hot love and hot loving all rolled up in one book. I can see why Dr. Sarah likes it.

I’ll use the Samhain blurb because 1) I’m lazy and 2) it’ll sorta, kinda avoid spoilers. At least at this point.

SFPD detective Gabriel Sandalini might as well have put a gun to his own head. One red-hot sexual encounter in a bar’s back room has put two years of deep undercover work in jeopardy-‘two years of danger and deception as he worked his way into crime boss Ricco Botelli’s inner circle. Gabriel can’t afford emotional entanglements. Hell, he can’t afford emotions. But that was before he had a name to pin on that anonymous one-off-‘Miguel Ortega.

Miguel Ortega doesn’t trust anyone, but tough, street-smart Gabriel brings out the conquistador in his Spanish blood. But distractions are nothing short of deadly right now, not with his boss’s impending marriage to Botelli’s sister, which will ensure peace-‘and massive drug profits-‘for both families.

On a trip to Mexico to set up drug supply lines, a violent confrontation proves they’ve got each other’s backs-‘to a degree.

Then one savage act changes everything, testing not only their fragile bond, but Gabriel’s will to live.

The book is steeped in great atmosphere and character descriptions. Yes, they might appear as stereotypes but stereotypes are just that for a reason and you both make these characters come alive rather than just stand in the background like cardboard. The scenes of the lavish engagement party, the grandeur of Sanchez’s ginormous SF mansion, the intimacy of the cantina in Mexico, the rough blankets and painful IV lines of the hospital – are all told sparsely but fully. Give me a few specific descriptors and there’s no need to over do things. 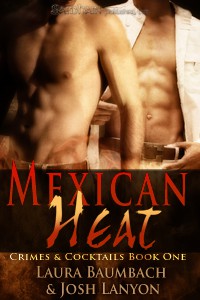 I only took one language course in Spanish oh, so many years ago, so I’m no expert on whether Ortega’s sprinkling of phrases through his speech is correct. But it did make me think of the recent conversation at Karen Scott’s blog about the use of foreign languages in English romance books. How some people, often bilingual people, say they never do this and find it annoying to read.

There’s a sex scene in the opening chapter that will curl toes and then…not another one for what seemed like ages. But the desire smolders through the long wait and I was content for the relationship to play out and for the story to not have a “shoe horned in” scene just because. The way authors handle the interim before or between scenes of sexual intimacy can do a lot to make or break a book for me. Here it makes it as it gives me time to learn who these two are without subjecting me to publisherus interruptus to try and heighten the sexual tension.

Gabriel needing and using dangerous sex as an outlet for the tight control he must maintain in his personal and private lives – as a vice cop he can’t go just anywhere to scratch an itch as well as being undercover in an environment that isn’t too friendly for Gays – makes sense to me. Ortega is older, suave, sophisticated, more in control of his emotions and at the stage where quality trumps quantity. But…at times he seems too emo, especially during the hospitalization scene.

During the first half of the book, they’re fuck buddies or not even buddies but casual fuckers, if that’s the right term. In the second half, they have to work towards / through their new relationship before engaging in sex again and this time it’s as lovers. But there are times when I, too, want Ortega to quit with the games already.

For a long time, the story is only from Gabriel’s POV and I guessed that the reason for this had to do with something that Gabriel wasn’t supposed to know.

[WARNING: POSSIBLE SPOILERS FROM HERE ON OUT]

It’s an easy guess and turned out that I was right about Ortega. This part of the story is also intense but you don’t make it a nonstop action sequence. Even during the scenes with no shooting or overt danger, Gabriel was still having to tensely maneuver his way through people who would cheerfully kill him if they suspected his true identity.

When the second half of the book starts, Gabriel has been broken down to the basics of himself. He’s very dependent on Ortega for everything which, given his smart ass personality when threatened, makes for some volatile confrontations. We also see Gabriel’s reaction to his blindness only through Ortega’s POV which sidesteps any issues about whether or not this aspect would be realistic to a non-sighted reader.

They’re working on a relationship while Gabriel is dealing with his new reality. It would be hard to do this under normal circumstances and it is in Ortega’s upbringing and nature to protect – which pisses Gabriel off as he’s trying to reestablish his independence. Gabriel is going through a ton of new experiences, but I would want to know if there was a contract out on my life or not. I totally agree with his anger at Ortega over that omission.

I too wondered at the reasoning behind the drug lord being so bent on taking revenge on Gabriel and not Ortega. Ortega’s reasoning of the issue fits the facts. The final shoot out scene reads like something from a Hollywood action film. And despite my agreement with Gabriel that he needs a weapon in case something happens to Ortega, it’s a gutsy move by Ortega to agree to Gabriel having a gun.

If this is what readers get to look forward to with your new crime series, I’ll be checking them out as they’re released. This is m/m written from a romance stand point. Yes, there are explicit scenes but they didn’t hit my raunch button. Yes, these two eventually fall in love and appear to be headed towards a HEA. Yes, I enjoyed the book and give it a B.

This book can be purchased in trade papeback from Amazon or in ebook format from Samahin.