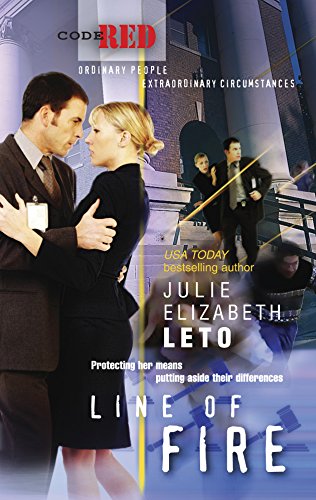 My main problems with romantic suspense books are that sooner or later, someone’s got to act like an idiot or lose all common sense in order to have a reason to save or be saved. No way around this, it seems. I just prefer to not see characters I’m supposed to like acting like morons. So, why do I keep reading this type book? Because there are some rom susp books which have worked wonderfully for me and I’m always looking for the next one. The critical factor appears to be: can the author persuade me to go along with the characters and their actions or does my kitty get an ear load as I complain?

Attorney Faith Lawton steps outside the courthouse. Shots ring out from a nearby rooftop. The concrete around Faith explodes with expended bullets as a pair of strong arms pulls her back into the building….

Faith Lawton welcomes the strong embrace of chief of detectives Adam Guthrie-‘for the moment. His fast actions save her life. But it’s nothing personal. They’re adversaries in the courtroom and out-‘in spite of their often sexually charged exchanges. Now Adam’s convinced she was the target, and that the shooter may strike again. Despite her protests, he’s out to find the gunman. And until he does, Adam isn’t about to let her go…

The book has a fast paced start with instant conflict between hero and heroine. And the conflict is solid and not some flimsy pretext for a romance separation. Police detective and defense attorney – yeah, as Adam thinks, they’re cats and dogs. Though since my cat and dog get along, there are times when these things can work out. But there’s also an already established mutual attraction and, very important here, respect between Faith and Adam. I like that they can flirt and still respect each other and the work the other does even though most of the time, they’re on opposing sides in the courtroom.

Faith has reasons beyond money for doing what she does – representing defendants and insisting on the legal procedure being above board despite what her clients are accused of doing. Yeah, watching someone who probably did what a lot of these clients are accused of get off free would scrape me the wrong way but the letter of the law should be applied to all.

And Adam respects this and doesn’t whinge when his department screws up. He notes the flaw and works to implement procedures to prevent it from being repeated. Faith’s work pushes him to be a better cop which isn’t a bad thing all around.

Faith starts out smart, self sufficient, knowing when to argue with Adam and – when the bullets start to fly – when to listen to him, if her instincts didn’t already tell her to do the same thing. Effing duck behind cover. She’s also compassionate and offers to stay in place – though out of the line of fire so it’s not like she’s acting stupidly – to call encouragement to one of the sniper’s victims. At this point, I’m thinking “characters I like, realistic conflict – we’re off to a great start.”

After Faith and Adam finally get the leave the courthouse, Adam rules out Faith going back to her house since no one is sure whether she was the intended target of the sniper but he okays a stay at the apartment above her foster parents’ restaurant. Then in a 180 they’re headed to her house. What happened with this? Suddenly it’s okay to head back to her pad since now they’re going to be distracted by sex? What happened to the thought that one of them might have been the sniper’s intended target?

Yet I like that Faith is sexually secure, knows what she wants, gives as good as she gets but demands getting something good. Go Faith. A question though. Why have Faith adopted by Hawaiians? Interesting cultural aspects get daubed on the story but did this really make a difference or was it just used to add multiculturalism to the book? I’m just curious.

Adam is dedicated and good at his job, good in bed, good in the kitchen and good on the dance floor. Wow, I’m in total agreement with Faith here – the boy’s a keeper. Does he pick up his dirty clothes too? But….what’s his flaw? No one is totally perfect.

Then the “sag and drag” middle section comes along. Slowly amassing and dismissing a list of suspects is the kind of tedious police work that generally doesn’t make the cut into a book, film or show. There’s a reason for this. Show me a little for realism but don’t bog the book down. Just as I was sinking into procedural ennui, shots ring out and the story revs up again. Thank you for that but ‘uh-oh’ about how Faith acts next.

She realizes she’s in love with Adam and common sense seems to fly out of her head. Which I guess would happen when someone you love gets shot even if you didn’t know you loved them already. She tries to hurl herself into danger when Adam is injured then generally gets in the way, acting like an ass and insists on seeing and talking with him before he goes into surgery. She decides after he’s shot that she can’t face a life of watching him put himself in danger then 15 minutes later she’s arguing with the chief of police about whether he has anything against her relationship with Adam.

At this point, I’m on the fence about the final grade. The romance, though sometimes inappropriately timed, is working fairly well though the suspense elements were wobbling around. Working at first then getting iffy as Faith and Adam would talk themselves into acting a certain way because the danger is over, or the suspect has been neutralized or they can’t possibly still be the target. And I know that this is like the girl in a horror movie going downstairs to check out the suspicious noise. Somebody’s gonna end up dead or hurt real soon.

The final suspenseful element notched the grade up. It arises because Adam is doing what he actually feels will keep Faith safe and she has no reason to believe, at that point, that she will become a target. Plus she keeps her head when taken hostage and by that makes up for some of the idiot things she did earlier. I like the addition of the information that Adam feels no exultation for what he has to do, only regret for the necessity.

You show, at various times in the book, that there are times when logic decides to take a coffee break and emotions that we can’t control take over otherwise sane and reasonable people. This I can tolerate a bit better than the idiot “talk myself out of doing the smart thing” I so often see in suspense books.

I do get the feeling that, as Adam says, these two really respect, as well as care for, each other. They’re balanced and working together to sort out their relationship and make it work. Though I can’t help but think that there will be differences, I can see them sorting through any issues or problems that arise due to their respective professions.