Kym Hinton recommended this book to me. Now, she edited it (and I assume accepted it for publication at Carina), so she was slightly biased, but, despite my trepidation with the first person, I’m so glad I read it. This is a debut, so you don’t have a backlist I can glom, but you’re going on my “Authors to Watch Out For” list. And I recommended it for our July Recommends, so here’s a slightly belated review. 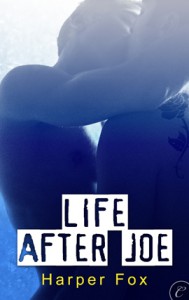 A friend of mine read this book and gave it a much lower grade than I’m going to because it was way too angsty for her. I, however, *like* angst. A lot. And this book certainly has a LOT of it. So I was a very happy camper.

Matthew is six months past a break-up with the eponymous Joe of the title. Joe left Matthew for a woman (after conducting an affair with her for two years, unbeknownst to Matthew). Joe was determined to make his parents happy by having the stereotypical heterosexual lifestyle, despite the deep love between him and Matthew–they were, in fact, childhood sweethearts who grew up together. Matthew had never been with anyone else besides Joe, until he started fucking around after Joe left.

This book is about stereotypes–it plays with them and builds on them and breaks them and I love it for that: the stereotype of the childhood sweethearts with the bit on the side, of the bar scene, of men going “on the down-low” for what they “really” want; the stereotype of the tall, dark, and handsome stranger that Matthew finds at the bar one evening before Christmas. This stranger is Aaron, an oil rigger, who is himself looking to drown his own sorrows at the bar but can’t bring himself to actually hook up with anyone. Aaron and Matt build a relationship much more quickly than either of them expects, until, of course, Joe shows back up.

The angst is…heavy. You do a marvelous job of dealing with all the emotional hangovers of a devastating break-up. Matt is blindly trying to find ways to deal with Joe’s betrayal and at one point he’s suicidal. You do a brilliant job of leading us into that darkness but at times I thought he pulled out of it a little too quickly for accuracy. Aaron’s own issues are also huge and while I love how he breaks down at the end and remakes himself, the lack of access to his thoughts (it’s first person narrative from Matt’s perspective) makes his tumble into love with Matt a little quick for me as well, considering his previous relationship. (And Matt’s storming of the oil rig was…a little forced for my taste, although I love what happened once he was there.)

All in all, this is a tidy little romance (100 pages) that plays with romance stereotypes AND with gay stereotypes in ways that I adore. It’s why I liked Jez Morrow’s tidy little Force of Law and Anah Crow’s dark, violent Uneven. The angst and heartbreak and pain is also a big plus in my book and you do it so so well. As I said, I’m looking forward to your future books (although you really need a website!).

| Carina Press | nook | Books on Board