“Abandoned by his cavalier father at a young age, William de Veres grew up knowing precious little happiness. But William has put the past firmly behind him and as a military hero and noted rake, he rises fast in the ranks of the hedonistic Restoration court. Though not before he is forced to seek shelter from a charming young Puritan woman-

The civil wars have cost the once-high-spirited Elizabeth Walters her best friend and her father, leaving her unprotected and alone. She flees an unwanted marriage, seeking safe haven, but what she finds is something she never expected. When her kindness and her beauty bring her to the attention of William, and then the king, she will have a choice to make. After all, can a notorious libertine really be capable of love?”

I’ll admit that I skipped reading “Broken Wing” because I’m just not that into lengthy sagas or horribly abused characters any more. However when I learned that “Libertine’s Kiss” would be set in Restoration England, one of my favorite era in English history, I jumped at the chance to try it out. 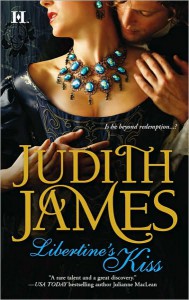 Lizzy isn’t a Puritan at heart and that isn’t the conflict in this book. It’s not Puritan vs Cavalier. It’s self destruction vs healing. True love vs empty and hollow pursuits. It’s bringing one man out of the desert wasteland he’s retreated into due to the corruption of his youth which lead into the corruption of his adulthood. He fits perfectly into the hedonism of Charles II’s Court but it would have destroyed him even as the other courtiers laughed and enjoyed his descent.

I like that Lizzy isn’t presented as some naive goody two shoes who charms the Court, Will and the King with her innocence. She is more innocent than a lot of women at Court but she quickly catches on to what she needs to do to get what she wants and also never loses sight of the prize she wants – her lands and security. She also realizes that Will does owe her and wisely decides to let him do so vs hauling herself on a high horse and refusing his advice.

Lizzy knows and sees Will as he is. She knows his reputation and that it’s based on truth and – thank you – that he’s not kept himself pure out of youthful love for her. There’s no rosy colored glasses on her. She believes he can be better and knows he has to try and change himself to be saved but she’s under no illusions as to what he is now. They both have tempers so life won’t be totally smooth sailing but both can control and direct their anger. I also loved that, years ago, Will teaches Lizzy how to fight and defend herself though she’s smart enough not to try and use this on her first husband. Those punishments you mentioned husbands using on their wives then are enough to send a cold chill down my spine.

Here’s a world with a much more casual approach to sex. Lizzy is a widow and it seems few in society would begrudge her any pleasure she wanted to look for. It’s also an honest look of how many men view sex. Will tells Lizzy that he won’t take any lovers should they get married and to him that doesn’t mean no sex, just no emotional involvement. I like that it takes him a while to realize that for him, Lizzy is the only one. Had he gone from libertine to overnight commitment, it would have rung hollow and I would have wondered how long it would last. He must slowly awaken from the numbing of his emotions that he did to himself as a defense against what was done to him.

Lizzy demands all of Will that she wants and won’t settle for less. Her reasons to not marry him go beyond just not accepting a lack of “I love yous.” Lizzy is aware that wanting to marry for love is a pipe dream for most and she curses Will at the same time she forgives him for teaching her to dream and daring her to reach for what she wants. She’s had a bad first marriage and doesn’t want a so-so second one. As a widow, she’s in a good position in this age. She has freedoms married women don’t and why should she give that up for less than what she wants? As they are now, she can enjoy him on her own terms and not have the emotional hurt of seeing him with any other woman, regardless of his feelings or lack of same for them. She also wants him to give up the poisonous way he’s living at the Court. The idea of him healing the damage done by his tutor and the life he lead in Europe is there without turning it into a modern, touchy feely healing session.

These two undergo great emotional upheavals in their relationship with each other. Their long term friendship morphed into sexual release and then morphs into emotional commitment. Lizzy was Will’s saving grace in their youth but he still has to decide to give up the way he’s been living at Court. I like that Lizzy makes him make the choice. She won’t try to change him herself but rather makes him choose. “I can’t save you, William. You need to save yourself.” In the end, he does choose her, to let her into his heart and choose to find himself and reclaim himself. B