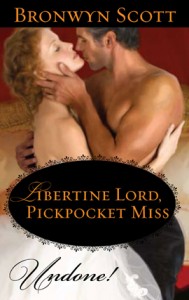 Julian Burke and Sophie DuPlessy are both after the same thing though for different reasons. Julian is charged to retrieve the priceless diamond jewelry for the English Royal family while Sophie has been hired by an Italian Count. He knows the jewelry was looted after the English Civil War while she’s been told that the jewels were stolen from the Count’s family. Right now, they’re in the possession of a French nobleman in Vienna and so it’s to there that both principals have traveled.

At a ball given by the Comte, Julian tries to use Sophie as an alibi to divert any pesky attention that might follow the loss of the jewels while Sophie returns the flirting and raises Julian some hot sexual petting in the stakes to claim the diamonds. When both discover that the other is somehow involved, they decide to settle their differences with some strip piquet. But when a determined Count comes after the diamonds, there’s only one way for Sophie to get out of Vienna and that involves Julian.

Novellas are tricky. There’s precious little space for an author to introduce the characters and plot then spin the story to a conclusion while making me believe in a HEA. It’s even harder if the hero and heroine don’t already have some kind of history together. “Libertine Lord, Pickpocket Miss” has this major handicap and while I enjoyed the characters and story, it was just too fast for my tastes.

I also didn’t enjoy being teased about Sophie’s level of experience only to discover otherwise. It goes along with the fact that though she essentially steals things, she makes sure that she’s in reality only retrieving goods stolen from their rightful owners. So she’s a thief but not really a thief. I’m tired of heroines who aren’t allowed to be truly bad but must be whitewashed for Romance consumption.

Julian is a good egg. He quickly realizes that Sophie is in trouble and doesn’t try and turn the danger she’s in to his advantage. He pulls a fast one during their wager yet he only plays on her assumptions. For someone involved in the type of shady shenanigans he is, he’s a straight shooter. Minuses for him: the fact that the hero, a younger brother of an Earl, is supposed to have a courtesy title. I have my doubts about this and, due to what happens in the epilogue, I wondered why it was even necessary. He also contains his sexual encounters to sophisticated, older women who “know the rules” so while he’s bad, he’s not really bad.

I’m not overly thrilled with this story but it’s more because the romance wasn’t handled well in the length of the novella and the fact that the heroine and hero are standard “bad” character wannabes. But I like the writing style and the secondary character who you mention will get his own story next year. C+

This is an e-novella that is not available in print. You can purchase the ebook at Harlequin.