After my disappointment with last years book about the Englishwoman who escapes from the harem, I will admit to being reluctant to try “Last Night’s Scandal.” I knew nothing about the hero or heroine or plot and wondered if it would be a sequel to “Don’t Tempt Me” which nothing could tempt me to try. Then I discovered that the book is what Carsington fans have been waiting for. Yes, it’s time for Lisle and Olivia, all grown up now, to fall in love. 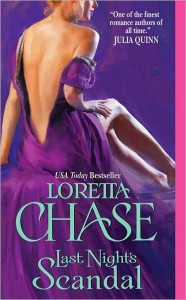 It takes a lot to get Peregrine Dalmay, Earl of Lisle back to England from his beloved Egypt but the birthday party of the Dowager Countess of Hargate, practically family to his, will do it. The old bat beloved, sweet old lady will be 95 and Lisle wouldn’t miss the occasion. But his parents’ demand that he stay and help oversee the restoration of a family property in Scotland is out of the question. Or was out of the question until the Drama Queens who are his parents threaten to cut off his allowance.

Faced with certain misery if he can’t get back to Egypt, Olivia Wingate-Carsington takes time out from her many Scandals and devises a Brilliant Plan. One that will Save Him from having to stay in England and at the same time get him back in the GOOD GRACES of his parents by doing what they think they want done.

Lisle, of course, balks at the plan which calls for Olivia, chaperoned by two of the Dowager’s over sexed colorful cronies, plus a mass of London servants to travel with him to Scotland to restore the castle which will then allow him to regain his allowance and go back to Egypt. But while they expect the ghastly Scottish weather and a temperamental French chef, what neither one counts on is a buried treasure, ghosts, bagpipes, sullen villagers and falling in love. Can Olivia’s exuberance and Lisle’s patience work together to save the day?

I think the story opens strongly and is laced with wonderful humor. The epistles say so much about each person. Full bore and wide open Olivia’s are filled with capitals, underlined words, strike outs and drama while quieter Lisle writes in a straight forward, no nonsense style. I knew I was going to enjoy watching these two drive each other mad even as they fell in love. And I don’t think I’ve seen mental lusting done quite so well. Usually I just think of the hero or heroine struck dumb and standing like an idiot with drool running down his or her chin but here I can see Lisle gobsmacked by the wonder of Olivia’s luscious bosoms and Olivia calculating ways to gobsmack him more while she reels him in.

But what I really love is that Lisle isn’t a rake or a Duke and Olivia isn’t pegged solely as a bluestocking – though she is intelligent. Aristocratic rank isn’t the Be all End all, “I gotta have it” that plagues so many English historical romances and it isn’t a Regency. I’ll be excited about that even if I do have to deal with 1830s fashions. About fashions I have to agree with the Ladies Withcote and Cooper. Give me 18th century peacocks with swords any day.

Once everyone gets to the falling down castle, the plot serves only to allow Olivia and Lisle to see their differences, to highlight their inner and external conflicts, to move them towards a resolution of their issues with their families and to get them to finally declare their love. I liked the quiet touches such as Olivia showing her competence and maturity in managing the servants or when Olivia and Lisle exchange unspoken thoughts over his plans and drawings of the castle.

I wasn’t as pleased about the second Big Mis arguement between Olivia and Lisle over the clues left by Lisle’s relative about the treasure. It just seemed a rehashing of the differences between them which had already been highlighted in their fight at York Minster. Perhaps it’s to show the two of them how much their strenghts and weaknesses balance each other. However this bit is balanced (had to throw that word in again) by the scene in which Olivia lets Lisle see into her heart and the depth of her love.
[spoiler]

“Come, ” she repeated, patting the bedclothes. “I want to show you my treasures.” She folded her legs to sit cross-legged.

“I thought you already had,” he said. He climbed in beside her.

“You’re not supposed to jump up from the bed two minutes after a man tells you he loves you,” he said. “Don’t you know anything?”

She opened the box and started taking them out: the packets of letters he’d written to her, the little painted wooden man – the first gift he’d sent her, the bracelet with the blue stones, the piece of alabaster….on and on. Ten years of little treasures he’d sent her. And the handkerchief with his initials she’d stolen a few weeks ago.

She looked up at him, her eyes itching and her throat aching. “I do love you,” she said. “You see?”

And I see it too. And feel it much more than I do when a lot of authors merely tell me their characters are in love. Some things are worth the wait and this book is one of them. Thanks.

This is a mass market paperback published by Avon, a member of the Agency 5.