Kindle Fire HD comes with the device and USB 2.0 cord. No power adapter is provided.  Amazon gets a big fat raspberry for that.

My first thought when I lifted it out of the box was that it was heavy.  According to the Amazon site, the Kindle Fire HD with the 8.9″ screen weighs 20 oz.  According to Apple, the iPad 4 weighs 23.04 ounces.  I’m getting use to the lighter weight of the mini iPad.   Out of the box the device must connect to WIFI and update its software. When the video starts playing the screen will automatically switch from portrait to landscape, no matter how it is held.

The screen is the real winner for the Kindle Fire HD tablet.  The screen resolution is amazing.  It is twice as good as the Kindle Fire and better than the iPad 2 and iPad Mini.  The individual letters look more solid and have less pixelation.  The resolution is similar to the Retina display of the iPad, although the Retina is slightly better.  Even the dark scenes had good visibility.  The drawback is that even High Quality video doesn’t look as good on the Kindle Fire. It’s screen is more powerful than the video being provided by places like YouTube.  While the Kindle Fire HD screen looks less white than the iPad, this is a feature not a bug.  The less white screen is actually easier to read for long periods of time. I would guess that the lower contrast between the color of the letters and the background reduces eye strain. 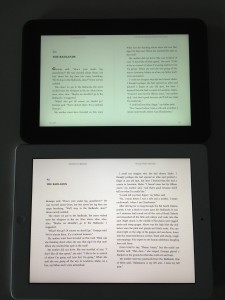 One of the challenges of a larger screen is that apps and video not optimized for the larger, more precise screen look pixelated.  This isn’t a problem isolated to the Kindle Fire HD, but rather all devices with the better screens will have these issues.

The side placement of the power button and the volume rockers are challenging because they are both nearly flush and I pressed the power button accidentally trying for the volume control.  The headphone jack is placed above the volume rocker.  The Kindle Fire HD has two  ports on the bottom.  I had to Google to figure out why there were two.  One is a Micro USB port for charging and connection to your laptop. The other is a Micro HDMI port.  This is to mirror video on your device to a television or larger screen. iPads have this but in addition to an HDMI cord, you have to buy a $49 Digital AV adapter. Oh Apple.

The wifi connection is fast.  There was no lag between accessing the movie and playing it. Even on my TIVO, I will sometimes have to wait 15 minutes for the movie to download before I can start playing without interruption.  There is only a second or two delay with the start of each movie.

I have heard that overtime, the Kindle Fire slows down and requires a restart.

Because of the Amazon Prime program, you can have access to thousands of movies and television shows for free. I tapped on Iron Man 2 and seconds later the movie started playing. If you are always near a wifi connection, the ability to access Amazon streaming video (or Hulu Plus or Netflix) is super. I did notice that some of the internet video, even the so called HQ at Youtube, didn’t display well. This is partly because Amazon’s web browser registers as a mobile unit for web browsers and thus the video delivered is of lower quality.

Amazon touts true Dolby stereo surround for its speakers.  One speaker is placed on either side of the device and because of the rounded, sloped edges of the device, the speakers are unimpeded when the device was lying flat on the table.  Audio such as audiobooks and music will play in the background while you read or browse the internet.  I played Christmas music while I played with the device, typed up my review, and played Angry Birds.  It was quite pleasant. 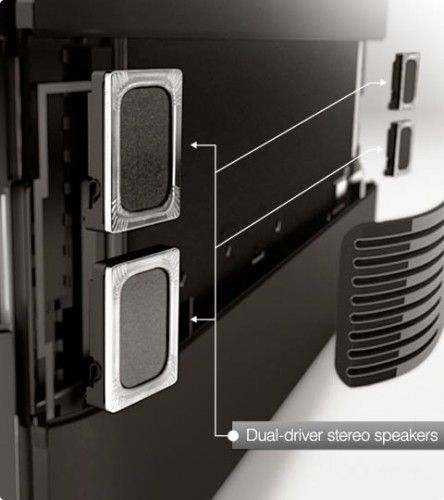 That said, there is little bass that is coming out of these speakers and at times, it is tinny in sound.

Kindle has made some improvements in software.  The Volume, Brightness, Settings are accessible with a quick swipe from the top of the device, downward. With a swipe of your finger upward, the screen disappears and you don’t leave the current app or book or movie.

If you are a heavy Amazon user, the Amazon experience is baked into the device, allowing for easy access to your movies and music (although you can replicate that experience by loading apps on your iOS like Amazon Instant Video).  The carousel still dominates and there isn’t a customizable homescreen like on a true Android or iOS device.

There aren’t the clever profiles that the BN software allows. Instead, you have the option of blocking content.  You can block and unblock, separately, videos, music, audiobooks, newsstand, docs, apps & games, and photos.  Unfortunately, you can still see the covers of blocked content. 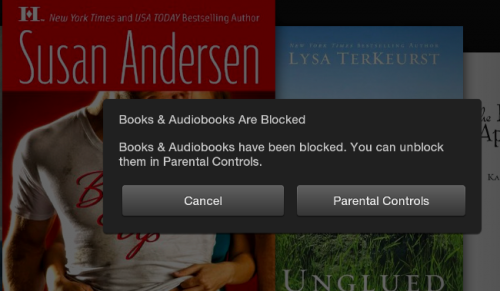 Amazon does have something called Kindle FreeTime which is similar to profiles.  You can create a profile for any number of people and then choose what books, apps, games and videos the person can access.  Kindle FreeTime is an app and I had to search to find it.  Further, you have to activate the profile every time. It is not an option presented to you at startup or screen lock.  It will also take time to add the content that you want your child to have access to. It’s not automated based on age appropriate content (and without labels or ratings for things like books, this would be a challenge). 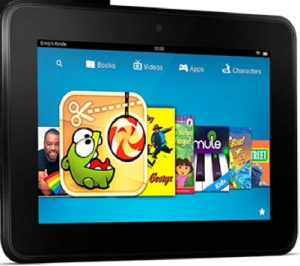 Once you have it set up, however, it looks great.  The person can access only the books, videos and apps you permit.  You can set time limits for watching video and playing apps separately from the “books” section which means your kid can read forever but only play videos for 1 hour per day.  Even the search function is limited to the content that is “allowed” for that profile.

On the keyboard, the delete button is awkwardly placed below the l and p.  The keys have spaces between them which makes touch typing a challenge.

On web pages, the pinch and zoom isn’t as smooth as on the iPad.  There are often some millisecond pauses and white screen before the content resizes itself.  Bookmarks are displayed visually and you can scroll each column individually which I really liked.  The web loading time seemed snappy.  However, the Kindle browser loads the mobile pages instead of the regular web pages like the iPad or iPad Mini.

I also had to download a file utility to transfer content from my Kindle Fire HD to my computer (and vice versa). I did not have this problem with the first generation Kindle Fire.  You can find the USB transfer software here.

Comparison with the iPad 2 and iPad Mini

The larger Kindle HD tablet is nice and at $299, the only comparable iPad is the iPad 2.  The screen on the Kindle Fire HD is so much nicer than the iPad 2, but it is slightly smaller.

You are getting more bang for your buck with the Kindle HDs either at the 8.9″ or the 7″.  The speakers are better and the screen is better.

The Kindle Fire HD is budget priced but if you read a lot of documents, magazines or want to watch movies, it is a great device. When you move up to the Nexus or the Apple iPad, you are paying for a slightly better screen and more functionality.  Amazon’s Kindle HD tablets are designed to consume content, primarily purchased from Amazon.

Beware, though.  If you look at an HD screen or a Retina screen, you’ll be disappointed with the lower resolutions on devices like the iPad Mini, iPad 2, and yes, the lower end Android tablets.

→ Jane
Previous article: Daily Deals: A variety of deals for under $1.99
Next Post: Open Thread for Readers for December 2012