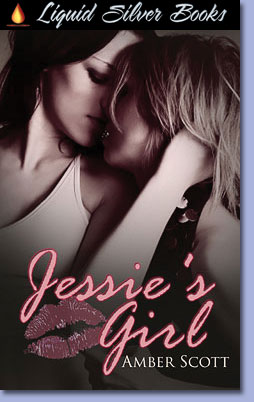 I’m so glad that The Powers That Be at Liquid Silver offered me a chance to read your novel. And so sorry it took me seemingly ages to get to it. But the book is more than worth it to read. I only wish the title didn’t bring to mind 80s heart throb Rick Springfield’s first hit song.

Jessie Hayes feels like she’s been hit by a thunderbolt when her twin brother Kyle introduces his new girlfriend at their older brother’s wedding. Sabrina French is hawt and most definitely not the wholesome girl Kyle seems to think she is. But Jessie fights her attraction for the slightly older girl since 1) she’s Kyle’s girlfriend and 2) Jessie assumes by that that Sabrina doesn’t bat for the same team as Jessie.

Turns out on her last night there, that Sabrina turns the tables on Jessie and initiates an encounter that will haunt both women for the next six years. Jessie still keeps quiet the next day but feels like shit when she learns that Sabrina has broken off with Kyle. She feels worse when Sabrina won’t answer her phone calls and sends Jessie a letter ending their relationship before it’s even begun.

Now it’s six years later and the two meet while Sabrina is having the final fitting for her wedding gown. It’s obvious that feelings still run deep but is Sabrina any more ready to accept the truth about her sexuality and her feelings for Jessie than she was then?

First off, the book is hot. The sex is hot and the feelings these two have for each other jump off the page. Some of my questions about why Sabrina turned tail and fled, then didn’t contact Jessie for so long were answered in her “appearances are everything” family. Plus, from what I gathered, Sabrina had never thought she might be a lesbian so the reality of her first encounter must have thrown her for a loop. But…she then had some experimentation with women so why did she never attempt to get in touch with Jessie?

Jessie, thank goodness, picks herself up and tries again for love in the intervening time though, of course, never finds anyone quite as good as Sabrina. I liked that she has the manners to quickly tell her current girlfriend that things just won’t work out. And that she’s still torn about her twin, and best friend, brother finding out the truth. She loves Sabrina but doesn’t want to hurt him.

The scenes with her sister-in-law and her brother Lawrence in the hospital for the birth of their child were a hoot. Birth plans, smurth plans – nothing stays the same once those labor pains really kick in. Plus I was relieved that at least some of them had suspected all along and were ready to help true love out.

Having read this f/f story, I find it hard to believe that this aspect of the GLBT genre hasn’t taken off as much as m/m. I very much enjoyed this one and hope to see far more. B

This book can be purchased in ebook format from Liquid Silver.