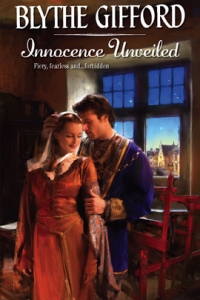 Your name was on my list of authors to try so when I spotted your latest release and realized it was about weavers in Flanders during the middle ages, I decided to try it. Hey, no knights, different setting, middle class, little used historical incident – I’m there. True it has a bastard hero but at least he’s not hooking up with a Saxon maiden after Hastings.

I like that you sprinkle information about women, weaving and the battle brewing between Edward III and Philip of France throughout the novel. No massive info dumps that bring the action to a dead halt is always a plus. I felt I got a good idea about the daily life of an unmarried woman in 1337 Ghent – very restricted – and how this contrasts with the greater freedoms that Katrine has as an agent for her absent father.

Weaving is her life. She takes great pride in it and how good she is at it. She’s managed their shop since her father was interned during his trip to England to try and obtain the English wool that is their lifeblood. This helps me to understand the lengths to which she’s willing to go to get wool from any source she can find and how quickly she agrees to Renard’s proposals.

Renard lives up to his name and all medieval people knew the legend of the wily fox who promises everything but who rarely delivers. Renard knows he’s got Katrine backed into a corner. She’s desperate for the wool needed to keep her weavers busy and willing to allow him into her shop. It’s a perfect place for him to lay low as he scouts the local feelings about the wool embargo imposed by his cousin King Edward III and whether or not this will lead the Flemish merchant class to force their Count to side with England rather than France.

Renard sense Katrine is hiding secrets from him but still feels he can control her. What he’s having trouble with is controlling himself. But as a bastard who’s lived on the outside, subject to the whims of others, knowing he has no land or home to offer anyone, he’s determined to obtain the promised Bishopric dangled in front of him by his cousin. Once he has that, he’ll answer to no man. I like that he’s determined never to father an illegitimate child. He knows the stigma of being a princesses’ love child and won’t do that to any innocent baby.

You did a good job explaining the politics of the plot and showing the wretchedness of a city caught in the cross hairs of two rulers thinking only of their own desires for land and power. What do they care about the people who starve? Even though this is the land of his beloved Queen, Edward is more than willing to cut them off at the knees to defeat France.

I like that Katrine is shown as a smart, capable woman but also one well aware of how her red hair is seen by others – as the sign of the devil and loose women. Religion was so much a part of daily medieval life and you nicely incorporate it so matter of factly into the thoughts, actions and feelings of the characters. Lust and desire aren’t just feelings but also signs of the fall of man and original sin – for which women are held responsible. I enjoyed Katrine’s theological debates with herself and her ultimate answer to Eve’s actions.

What didn’t work so well for me were the repeated misunderstandings between Katrine and Renard. And by repeated I mean the same misunderstandings are reheated and served to us time and time again. Plus Renard’s anger that Katrine withheld the truth pissed me off. He lied to her from the beginning, knew she was not being completely honest with him, has this pointed out by others and yet he’s still in a snit about it. The one note villain who conveniently tells the truth just when it’s needed to save the day was a disappointment as well.

I liked a lot of things in the book and as usual am delighted whenever an author utilizes a different setting. Middle class characters are a boon – we can’t all be lords and ladies. I just wish the conflicts hadn’t been rehashed and the villain’s motivation obvious from his first appearance. B-