REVIEW: If His Kiss Is Wicked by Jo Goodman 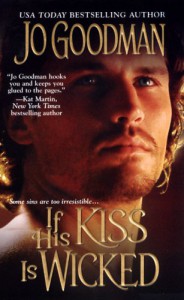 I’m never sure a) why I started reading you so late (only two years ago) and b) why not everyone has caught onto your genius by now. If His Kiss Is Wicked is another solid entry into your catalog of published books.

I don’t want to give any of the plot away because what happens is quite a surprise and I wouldn’t want to ruin that for the readers. My summary, thus, is a bit vague. Emma Hathaway is a gentleman’s daughter who went to live with her uncle and her cousin, the beautiful Marisol, a few years ago upon the sudden and accidental deaths of her parents. Her cousin is flighty and tends to engage in flirts with men not her fiance. Emma agrees to pretend to be Marisol and put an end to the most recent flirtation. What happens at the meeting pushes Emma to seek out Restell, a man who solves problems.

Restell Gardner is known to be a bit poor, a bit disreputable, and a bit of a rake and over the course of the story, the reader finds out what is truth and what is fiction. He does, however, help Emma and does because he cannot help but admire her strength. Over the course of his “helping” Emma, he finds in her a woman who is not only admirable but desirable and falls in love with her. What is so interesting about this book, though, is that the happy ever after doesn’t begin at the point of falling in love or at the point of marriage or at the point of consummation. The HEA is an achievement that both Restell and Emma work hard at securing for themselves, both individually and together.

The one major complaint I had was that there were a number of individuals from previous books who had small screen time and I had a difficult time keeping track of people. I almost would have liked a “cast of characters” introduction. Many of the characters were interrelated which was probably a very accurate snapshot of the ton back in that period, but because I only visit with these characters for a few hours every 6 months or so, it’s hard for me to remember everyone’s name and place in relation to the main characters. The other complaint is that one of the villians seemed so obvious from the start and it was a bit jarring because everyone else was so nuanced.

What I appreciated was the subtle shadings of character, the dialogue, and the pictures that you painted with your words. I.e., I never once had to be told that someone was clever or witty or funny. I could discern that myself from their own actions. Many of the conversations, particularly the exchanges between Restell and Emma, were terribly amusing.

“Do you sulk?”
“I brood. It is the masculine form of the expression.”
“I did not realize.” She speared a small stack of carrots. “What of fussing? Do men fuss?”
“They stew.”
“Yes, I can see how they might. It sounds even masculine. Very meaty.”
Restell was having difficulty maintaining a tone as dry as hers. “Men are not harried either. We are plagued.”
“I see. It must be a great trial to you, being a man. I am sure I would not have the stamina for it.”

I’ve often thought that the endings of your books have been the weakest part but not in this one. The story had wonderful movement, much more so than a traditional romance. There were more ups and downs and it all built toward this climactic ending. Jayne mentioned yesterday that she was so engaged in Lord John and the Brotherhood of the Blade that she “cursed when it was the last second [she] could leave for work and not be late.” Me? I took the book to work with me and read it during breaks that I manufactured and finally finished it over a long lunch. I hope that in six months you ruin another work day for me. A-.

This book can be purchased at Amazon or at Fictionwise in ebook form.