REVIEW: How to Woo a Spinster by Kasey Michaels 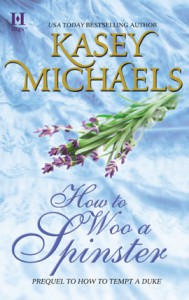 When I was checking out the new offerings from Harlequin, I saw your name and popped the book in my ecart without looking too closely at it. So, when I opened it up on my reader, I was dismayed to see that this is obviously a novella. Now, novellas can work for me but too often something gets missed or rushed in the short word count race to the finish. Imagine my delight to discover one that gets it right.

Lady Emmaline Daughtry has resigned herself to spinsterhood. Her face doesn’t frighten horses but after three failed Seasons, she’s accepted this fact. Her (much) older brother, the Duke, and his two sons – also miserable specimens – make no attempt to stay with her to celebrate her twenty-eighth birthday, preferring to try out the yacht one of them won in a card game. When a handsome Naval captain arrives with bad news for Emmaline, neither of them know that – for them – it’s the start of something wonderful.

This is a little gem of a novella. It pays court to Regency romance conventions then uses the characterizations you’ve given the hero and heroine to explain why they aren’t following them instead of merely ignoring them or giving some ridiculous reason not to abide by them.

I love the little bits of humor sprinkled throughout the story. This is not a farce so much as a story with restrained, gentle humor. Pratfalls wouldn’t have worked given the events that unfold.

Emmaline does mourn her relatives – at least to the extent she could given how she disliked them. She mourned the men they might have been, could have been and should have been. But she’s honest in admitting she won’t cry her eyes red in grief.

The book has done it’s job – set up the next two full length books and sold me on trying them. The brief glimpse of Charlotte – and her “painted frog on a rock” humor – intrigues me. I just hope we won’t be subjected to too much of the new Duke’s mother. She’s a piece of work.

Finally, let me end by saying the declaration of love is one of the most moving I’ve ever read in a romance.

"I will never-leave your side. Never. At last I’m alive-" he whispered, and her tears fell once more as he kissed her hair, her eyelids, even the tip of her nose, before settling once more against her mouth. "Neither of us will ever be alone again."

→ Jayne
Previous article: Monday Midday Links: It Is All Gloom and Doom (today at least)
Next Post: Guest Op: The Case for Steampunk Romance