REVIEW: How to Tempt a Duke by Kasey Michaels 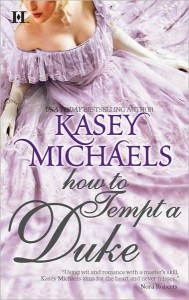 If the purpose of the novella “How to Woo a Spinster” was to get me to buy this full length novel, it worked. But as I started to read How to Tempt a Duke, I wondered if I would get through it. Let’s see…Regency era, Duke hero, feisty younger sister, heroine with Dark Secret in her past who starts to bicker with the hero as soon as he shows his face at the old homestead. Hmmmmm, where have I read all this too many times to count?

Rafe Daughtry, son of the younger son, never expected to inherit the Dukedom. After all, his uncle was healthy and the heir and a spare were still up to their wicked, disgusting ways. That is until all three were drowned – along with some barques of frailty – in a yachting accident. Once word finally caught up with him in Paris, Rafe decided to stay and escort Bonaparte to Elba before heading home.

When he arrives in England, it’s to discover that his newly married aunt has left his two much younger sisters in the charge of his old neighborhood friend, Charlie. And hasn’t Charlie – um, Charlotte – grown up nicely. But what’s this about Charlie having been engaged to his younger – and more repulsive – cousin before the sailing accident? And why won’t she tell him what’s behind that? As Rafe tries to settle into a position he’s not been trained for, he realizes there are a few other things to discover before he can claim the woman he’s coming to love.

I’m not joking when I say that this book took me a good 100 pages to really sink my teeth into and get involved with. The opening scenes with Rafe and his soldier BFF, Fitz, were what made me stay the course. The instant bickering between Rafe and Charlie boded ill and Rafe’s younger sister, Nicole, made me want to urge him to check into a good, strict military school for her. Very, very strict. The subplot about the attempts on Rafe’s life also seemed like it would be dragged out just when I least wanted it. And it was.

But then things settled down and Rafe and Charlie began to talk. I mean really talk. And the Dark Secret was revealed without too much martyred silence and padding of the plot. This was when I fell for Rafe. The man steps up to the plate and smacks a homer out of the ball park with his response to what happened to Charlie and how her family reacted to it. Then he gets a little more touchy feely than seems normal about waiting for Charlie to overcome her reluctance to marriage but I guess I’d rather this response than cold indifference to her fears.

And it’s about this time as well that Charlie begins to show the managerial skills as well as teasing that have been written into her past. She also knows exactly what Nicole is up to and seems like she’s not going to take much shit off Nicky. I could even tolerate the oft used “climbing into bed with fever stricken hero to warm him” scene considering how much humor Rafe shows when they’re inevitably found out.

I wasn’t sure where the secondary relationship in the story would go and have to give you a nod for taking it into a difficult direction, then seeing it through. I have a feeling as to what will happen in the next book. Let’s see if I’m right.

With all these aspects taken care of, I was afraid that the dreaded subplot of “who’s trying to kill Rafe” would rear its ugly head. And it did. And Nicole acts feisty. Though she did take a hand in her salvation. Rafe truly needs to lock her up until he can hand her off to some poor fool. I mean….honestly. This part of the book seemed tacked on and basically useless, IMO, complete with foaming at the mouth villain. All I could think was…page count needs to be padded out.

So a weaker beginning coupled with weaker ending lowers the grade on a book that could have been something much more special. The middle is something that I can recommend, in contrast to so many books which drag before a bang up finale. But the whole gets a B-

→ Jayne
Previous article: Why I Write by Courtney Milan
Next Post: All About the Lists