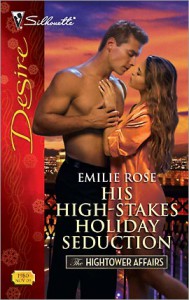 As I mentioned in my review of “Bedding the Secret Heiress,” it was the excerpt for this book which got me to get both of them. After my disappointment with “Heiress” I seriously debated whether or not to just call it a day with this series since Trent Hightower hadn’t impressed me as being anyone more than a grade A asshole. Yet the part of me that wanted to see if he could be redeemed took over my fingers and pulled “His High-Stakes Holiday Seduction” up on the ol’ Sony. And let me say I’m glad I did try it.

Paige McCauley is stunned to see Trent Hightower pass her by as if they’d never shared a regretful evening a year ago during the last convention he’d attended at the Las Vegas hotel where she works. Determined to recall herself to his memory and make him remember her from now on, she hauls ass after him. It’s funny but for a second, she’d almost think they’d never met. The chemistry that had been so lacking last year is sizzling now.

Trent Hightower knows immediately that his twin brother Brent must have picked up the lovely young woman the year before. But since Brent is now reconciled with his wife, and his wife could bring the family business to its knees with a messy divorce settlement, Trent sighs and begins damage control.

He’s got to get to know Paige in order to discover how he can best manipulate her and clear her out of the way before Brent and his wife arrive in Vegas at the end of the week. Problem is, Trent and Paige are both discovering how hot they are together…and both might be wishing for more.

Initially I still wasn’t that impressed with business mogul Trent. He’s a control freak who feels compelled to clean up after his brother’s messes. Then I remembered how hard Trent had worked to build the family fortunes back up from what his gambling father had done to them. I still wanted him to let Brent sink or swim – and was glad to see he finally came to this conclusion as well – but he had a lifetime of “fixing things” to overcome.

Paige is also a fixer/mediator which makes sense given her position as the middle child among a family of five daughters. I was leery of her determination to have a hot fling with Trent but also somewhat cheering her on mainly because it stood for her overcoming her own reticence and taking charge of her sexuality.

But what really makes this book for me is 1) that Trent decided on his own, before hearing anything from his brother about what actually happened the year before, that he loves Paige and is willing to try to overcome what he feels are his weaknesses in order to win her and 2) that Paige gains enough confidence in herself, before Trent makes any declaration to her, to face her past, come to terms with it and then move on. Neither requires assurances from anyone else about past purity, worthiness or maturity. They’ve dealt with their family issues and seem ready to move forward with their own relationship – quick though it developed.

I still think most of the rest of the Hightower clan are jerks, users and useless rich people but Trent was redeemed and I think him worthy of the heroine you created. B