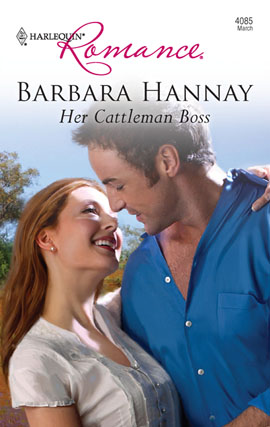 I’ve been meaning to try one of these Harlequin books set Down Under. High fives to Harlequin for publishing these Australian set books by Aussie authors that remain Aussie in feel and speech.

Years ago, Kate Brodie met and fell in love with Noah Carmody while visiting her Uncle’s cattle ranch. What she didn’t know was that he’d been warned off by Angus. Even though Noah clumsily, but gently, rejected her, Kate planned on returning to Australia from her home in England, sure she could eventually change his mind. Until news reached her that he’d married and fathered a daughter.

Kate pulled herself together, dated and pursued a career as a photographer. Then got the news that Angus had died. After an exhausting flight and trip to the Outback, Kate is stunned to find out that she’s inherited half of the cattle ranch, that Noah’s ex-wife intends to sue him for half of his share and the ranch’s only chance for survival in this extreme drought is to drive the remaining cattle to market.

Will Kate be able to convince Noah that they have a chance at a HEA or will she once again face disappointment down under.

Noah’s reasoning in not acting on his initial attraction to Kate makes sense in light of his warning from Angus not to mess with his niece. His not replying to her card and thinking that would quickly end the infatuation Kate had for him seems like something a guy would do.

There’s lots of time spent with Noah wistfully thinking that Kate has a boyfriend. And lots of time showing Kate certain that Noah still carries a torch for his bitch of a first wife. Who incidentally doesn’t show up well in the mothering stakes. Is this the new way to prove a woman is the villain of a book? But the way Noah puts off talking about their relationship, or lack thereof as he sees it, seems guy.

Olivia is delightful. Neither preternaturally wise nor lisping innocence she acts like an eight year old. She gets excited over seeing baby pigs, enjoys the chance to play with some girls her own age during the cattle drive and still loves getting new clothes for her doll on her birthday.

I like that Kate handles her relationships well. When she discovers that Derek isn’t the man for her, she coolly ends things, has a cry but quickly realizes that he wasn’t her one and only. Thanks for not prostrating her with grief over an asshat. Kate also doesn’t let this sink her in a downer mood wherein she mopes that no one will ever love her, she’s hopeless at love, blah, blah, blah.

When Noah is adding up the problems of his life, he appears to look at them as a man would. His first priority is the drought at the ranch and dealing with the cattle, then it’s the problem left by Angus’ will and only then his personal relationships. He also sees Kate as attractive but what really catches his attention is how well she handles the cattle drive, especially the truck stuck in the river mud.

It’s obvious that Noah loves his daughter. That she’s his princess as Kate was for her father. I enjoyed the scene in which Kate reminisces about how she used to wait for her father to come home from work and of the little surprise presents he would have for her in his coat pockets. Nothing amazing but they would be things just for her.

The cattle drive shows Aussies at their best. Hardworking, easy going, ready to pitch in and help at a moment’s notice. It also gives a clue as to the vastness of the Outback, the sheer distances involved in living here. I can see that it’s not for everyone – as we were shown by Liane. These people are independent and used to doing for themselves in a pinch.

Noah’s got a dry sense of humor. I laughed at his take on how their hosts viewed his and Kate’s relationship as shown by putting them up in a room with one bed.

Kate frowned at him. "What are you doing? Surely you’re not going to sleep in that swag tonight?’

His eyes glittered with a strange light. "I don’t have much option.’ Without another word, he hefted the heavy swag onto his shoulder and marched to the cottage.

"Wait, Noah. What are you talking about?’

"Come and see for yourself.’

Puzzled, she followed him into the small timber cottage nestled within a grove of bottlebrush trees. The interior was neat, functional and homely, with old fashioned cream linoleum flooring and pretty floral curtains at the window.

A double bed with a white waffle-weave spread dominated the large room. A small kitchenette took up the far corner and a door led off to the bathroom. Kate looked for another door. "Is this all there is?’

"But-‘’ She watched as Noah set his swag on the floor and her pulse went haywire. "Do the Jamesons think we’re married?’

"They obviously assume we’re a couple.’

"It’s not exactly something you rush to point out when you first meet people, is it? "How do you and, oh, by the way, I’m not sleeping with this woman".’ His tone was dry as dust, but his eyes betrayed amusement.

As she did with her breakup with Derek, Kate handles herself well when she and Noah finally do have “The Talk.” When he pulls back and gives Kate a lot of mumbo jumbo about her needing a man who can give her what she wants, Kate doesn’t crumble in a heap, she doesn’t beg or plead. Kate pulls herself together and with grave dignity ushers Noah out the door.

And bully for Kate that when Noah does come to his sense and runs after her, she doesn’t fly into his arms but rather asks hard questions about what wrought his change of mind. She’s been disappointed before and isn’t going to let her heart be stomped flat again. I like that she insists on being sure about the reason behind his complete about face.

I even like the epilogue though it’s filled with fertility. It’s not overly sweet, states what you want us to know about these characters and then gets it over. Good job. B

→ Jayne
Previous article: How does Edward know Bella is his soul mate?
Next Post: REVIEW: Accidental Mistress by Susan Napier