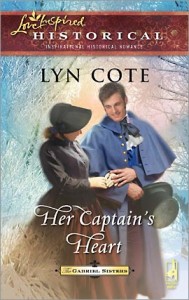 If one says that the American Civil War has dropped off the face of the earth as far as romance books are concerned, that goes double for the Reconstruction period that followed the end of the war. I guess picking up the pieces and sweeping away the rubble isn’t as much fun. But I have to say that the books I’ve read of this era have been among the best American Historicals and I’m happy to add this title to the list.

While Lee might have formally surrendered to Grant, there are those who aren’t willing to put down their rifles, or put away their hate, just yet. Verity Hardy knows she won’t be welcomed with open arms to Fiddlers Grove, Virginia but she never expected that anyone might use violence to stop her from opening a school for freed slaves and their children.

Matthew Ritter has no such illusions. The townspeople drove him and his family out years ago when his father defended a free black man from being taken by slavers and he knows their feelings probably haven’t changed now that the South has lost the war. Will his prediction of violence come true or could this town possibly have improved since he last saw it?

I think you did a great job depicting what the town and townspeople looked like. The gauntness, the hollowed cheeks, the ragged clothes, the peeling paint on the buildings. How Verity felt that she, a woman who lived plainly all her life, needed to be cautious least she appear to be flaunting her Yankee “wealth” to these people who had almost nothing after the war.

I enjoyed Matt’s wry sense of silent sarcasm. And how he didn’t turn into an emo, angst boy throughout the book. Showing his emotions is difficult – actually almost impossible – for him so when he finally admits to himself what he feels for Verity – and how the simple touch of her hand to his face and hair makes him feel, the impact is all the more decided. Thank you for the lack of mental lusting throughout the book.

The book has a real feel for the fear that must have been in the household of anyone attempting to do what they were doing so early after the war. Teaching blacks to read and write? Oh yeah, that’s going to go over well in Virginia a year after the end of the war. < /sarcasm >. Verity just has no idea what she’s walking into even if Matt does. The tension is almost palpable.

The religious aspect of the book is very pronounced but since the heroine is a Quaker who lives her faith daily, that’s to be expected. I was glad that even though her father-in-law believes in the use of guns – and has one with him – Verity stays true to her pacifist beliefs when the chips are down and the villain tries his worst. I did note that she slips once or twice with her thee’s and thou’s and uses the singular “you.”

Usually children are not my favorite characters because, generally, they seem to me to be portrayed as either too cute or too old for their stated ages. In this case, Beth and the others felt natural to me and not either cloying or worldly wise. However, the question Verity finally asks herself dawned on me fairly early. Did she have the right to ask her young daughter and older father-in-law to face the dangers inherent in what she, Verity, was trying to do?

I’m glad that you showed the blacks of Fiddlers Cove as three dimensional people. They weren’t just the happy free slaves but people still living among those who had kept them in bondage and who didn’t want to see them advance in the world. The initial suspicion towards Verity makes sense. She’s white and though she says she’s there to help them, they have to be sure. They’re also still hesitant to sit with whites or do other things forbidden to them for their entire lives, up to this point. Old habits and caution are going to take a while to die.

I did wonder how on earth Verity would win over the women of the town but she managed with probably the one thing these women couldn’t turn down. The way you showed the change in status of Matt’s cousin was a nice touch. Dace might still have the land but the money is gone and he’s not the automatic leader of the community any more.

Samuel certainly lucked out in finding Abby so quickly. In less than a month, he’d tracked down the slave dealer and to whom Abby was sold then gone and got her and her two children and gotten married back in Fiddler’s Grove. I can see how he wouldn’t want to settle there, though.

Orrin and Lirit (unusual name) acted exactly as I thought they would when they were first introduced as characters. And why did Dace marry that shrew? Looks alone? Joseph gives Dace some good advice should he ever decide to try a second marriage.

The war wasn’t over. Verity is right about that unfortunately. Not only did the memories of what happened still linger for the men who fought, the families who waited and lost a loved one but also for the people who witnessed the battles and tried to nurse afterwards. The deep seated feelings of hatred and prejudice would linger for a century and more.

I was sorry to see that being unreasonable wasn’t limited to the people of Fiddlers Grove but I think the way you end the book makes sense. Life wasn’t suddenly all happy rainbows and fluffy bunnies as shown by the imposition of martial law across the South. But I think you did a good job showing how love and romance can bloom even amid such hard times and bad feelings. B