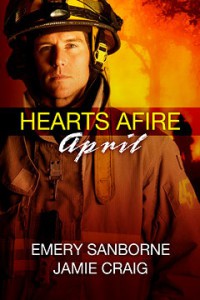 It’s taken me far too long to finally review this offering which I got in ::winces:: April. Bad moi. But here it is at last.

Once Burned by Emery Sanborne

Hot firefighters, hot attraction, hot sex. “Once Burned” has all three. Plus lots of local Philadelphia color. Andreas Sullivan has tried to date a fellow firefighter before and all it got him was trouble and heartache. Will this time be any different?

Andreas and Bobby seem to have had some problems with being accepted as gay both by their families and by society. Andreas has been in more than one fight though he’s decided to try and shrug off antigay comments. One of his brothers wasn’t totally accepting of his lifestyle though now it appears that the brother is trying. Bobby’s father, a former Army man, only came to accept Bobby’s sexual orientation when faced with the greater disappointment of his son joining the Marines. Both are experienced and have had long and short relationships though there’s not as much about Bobby’s backstory and history as Andreas’s.

The firefighter stuff adds some color and shading to the story and serves as the showdown on whether Bobby and Andreas will move forward in their relationship or back off. I like that the secondary characters support the main characters and their relationship rather than dragging time and effort away from it. This has more sanitized gay sex – by which I mean no enemas. The sex is hawt though not either too clinical or too raunchy and raw.

There’s lots about Philly here so natives might want to check it out for that reason. This one has a HFN instead of HEA which fits the length of the story and where you ended it. B

This one opens with immediate action as firefighter Dan Middleton and his squad get called out to a traffic accident. It’s a bad one. One driver is DOA and the other pinned in the wreckage of his car. Dan takes the role of keeping Anthony calm until the jaws of life can extract him from what’s left of his car. A year later, Anthony arrives at the fire station to personally thank Dan for all he did. When attraction flares between the two men, will it lead to anything?

Dan is a sweetheart. Chivalrous, dedicated to helping others and hot in bed. The only trouble is now he has to scale back on his first instinct to take care of everyone when beginning to date a man who treasures and fights for his independence. When Anthony lost his sight in the accident, he had to totally relearn his world and rebuild his life. Having Dan always doing for him takes away some of the freedom Anthony has fought to regain.

I think you work out this aspect of their relationship a bit better than the other issue of the story, namely is Anthony actually attracted to Dan because Dan saved his life. This is mentioned a few times but beyond Anthony denying this is the basis for his attraction to Dan, I didn’t feel it was resolved to my satisfaction.

You’ve included a lot of detail about the way Anthony lives now and how his blindness has impacted his life. I especially like the parts where he details how he’s adapted his job as a sportscaster and how he forges ahead into new territory with his interviews.

Unlike ‘Once Burned,” Anthony and Dan don’t appear to suffer much discrimination for their sexual orientation but perhaps this is due to the San Jose locale. The sex is hawt though not raunchy. However, I would have liked to have seen more of Dan at work before the final scene which felt crammed into the story. B-

This book can be purchased in ebook format from Fictionwise.

FTC discloser – A free copy of this book was provided to DA by the publisher for a potential review.

→ Jayne
Previous article: Are you planning on buying an ebook reader this Christmas
Next Post: REVIEW: A Lady of Persuasion by Tessa Dare