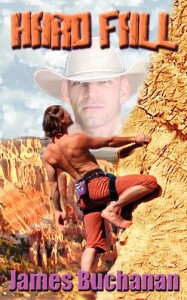 This was such a great book as I was reading it that I couldn’t put it down. Although there have been a few things niggling at my brain in retrospect, the actual reading experience was almost perfect.

That pleasure came mostly from Joe: Deputy Joe Paterson, devout Mormon, Sheriff’s deputy in a small county in Utah, and a deeply closeted, although self-accepting gay man. The novel is told from Joe’s first person perspective, which I usually don’t like, but his voice was so strong and so comfortable and so real, that I just couldn’t put him down. I imagine having him in your head as you were writing was both incredibly uncomfortable and deeply satisfying.

Kabe Varghese is the trouble that Joe can’t refuse. He’s a rock-hound, a high adrenaline climber, on federal parole for “[f]ree-climbing a federally-owned dam with enough E in [his] pack to fly a football team” and is trying to keep his citified nose clean by staying with his family, who asks Joe to keep an eye on him. Joe can’t help but keep an eye on him, because he’s totally attracted to him. When a Search and Rescue call comes in for a fallen tourist, Joe has to call on Kabe to help with the body recovery because he’s the only other climber he trusts in the area. They have a little pissing contest on the cliff when Kabe tries to mess with the straight Mormon and Joe asserts his natural dominance and reveals to Kabe that he’s gay. They begin their sexual relationship the next day, while looking for evidence to do with the death, and most of the rest of the book deals with the significant fallout from Joe’s church and job when Joe and Kabe inadvertently out themselves.

The beauty of the landscape in which the story is set comes through perfectly. Joe is so much a part of the land, it almost hurts to read about it:

I certainly couldn’t think of a finer place to be at that moment. Touching him like that, sharing a huge blue sky. The wind got the trees whispering and the ground squirrels romanced each other. Near perfect afternoon with just us together. And I loved the mountains, loved ’em like my own life. Nothing in the world could compare to a huge sky miles from any hint of civilization. Reminded me of sex…the openness of it, the forgetting yourself in the moment of it, losing your soul to something bigger and touching creation for just a second. Closet romantic, me.

I love Joe’s comfort with himself on all levels: as a member of the LDS church, as a believer, as a law enforcement officer, as a gay man. All of these elements are essential to his very existence. He doesn’t lose his faith as he’s thrown out of his church for being gay; he doesn’t deny the power of belief. He’s mostly comfortable with himself as a gay man (this unexpected comfort is explained), although he’s internalized his church’s stand on extra-marital sex enough to feel that he’s “giving in to temptation” and “sinning” when he gets together with Kabe. In fact, he’s focused so much on the sinning aspects that he loses sight of why having an affair with an ex-con and a “person of interest” in a murder investigation is a bad idea. His meeting with his sheriff is raw and powerful and his reaction to his suspension, his ex-communication, and his community’s withdrawal is so real and so heart-rending. Neither Joe nor Kabe do a good job talking about their feelings, but that doesn’t mean they’re not immediately obvious. Show, not tell is in full force in this story.

I love the community you establish between Joe and the other law enforcement officers and your facility with the maze of jurisdiction issues between the county, the town, the Bureau of Land Management, and the National Parks Service, and the paperwork it entails when a county official needs to go onto state or federal land.

The thoughts forced into something resembling an apology. “Okay, I don’t normally…”

His words hit me like a two-by-four between the eyes. “What?”

“I liked it.” Kabe licked his lips and half closed his eyes like he remembered something good. “In the truck, when you tied me up.” A shudder ran all through his body. “Last night, fuck man, it’s never been that intense. So we’re good, anytime.”

For all that following Joe’s journey is wonderful, we know much less about Kabe. The first person perspective doesn’t allow us into Kabe’s head at all, of course. Although he seems very eager in his relationship with Joe and we get glimpses of how much he likes Joe and of what he’s getting out of the relationship (someone who treats him with respect), I still felt a little cut off from him, less able to trust his commitment to the relationship. This bleeds into my other problem with the book: the happy for now ending is solid, but not as strong as I like them. You tweeted with me that you doesn’t believe in Happy Ever After, because that just makes people complacent. Happy For Now means that people know they have to keep working at making it happy. And while I get this (19 years working on my HFN ending!), I also wish I’d been able to see Kabe put down a few roots besides those connecting him with Joe. Their last “fight” is Kabe trying to get Joe to shake the dust of small-town Utah off his feet and Joe reiterating that he belongs there, even if the community doesn’t think so. Kabe is committed to Joe, absolutely, but not so much to what makes Joe Joe: the land, the community, his law enforcement status. This isn’t going to be an easy relationship.

This book can be purchased in trade paperback from an independent bookstore or ebook format from AllRomanceeBooks.