Note: Risk of spoilers for the series. 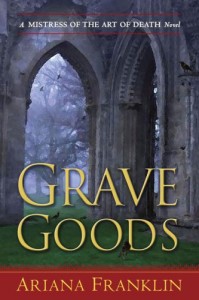 Those who have fallen under the spell of Vesuvia Adelia Rachel Ortese Aguilar, the "Mistress of the Art of Death," will get all excited over book three of this historical mystery series. I know I squeed with glee when my copy arrived. God bless the US Postal Service and your publisher for making sure it arrived safely. As a fan girl of long standing, it was both a treat and a temptation. Something to be anticipated and savored. It did not disappoint.

Adelia and her forensic skills, gained at the University of Salerno, the only place where lowly women are educated suchly, have been called upon for a third time by the king. After a battle to put down a Welsh rebellion, Henry learns of a vision. A bard, who won’t stop singing, tells, after a degree of – shall we say – persuasion, of a sight witnessed by his uncle a monk, of a burial in Glastonbury Abbey twenty years ago. At Henry’s orders, the current monks dig deep and discover a coffin in which are the bones of two people, one very tall and one very short. What Henry wants from Adelia is proof that these are the bones of Arthur and Guinevere.

Why is the King of England so determined to obtain this proof? So that he can exhibit the skeletons and prove to these damn Welsh, and any other damn uppity Celts, that no legendary dead King is going to rise from the grave and lead them to victory, that’s why. And if he can have fun throwing Adelia and Rowley Picot, bishop of St. Albans, into close proximity while the proof is obtained, so much the better. Henry does have an evil sense of humor.

So once again you have Henry demand an almost impossible outcome from Adelia. And, as you and history have shown us, Henry isn’t a man to be crossed or pissed off lightly. Adelia makes sure he realizes that his proof will be impossible to obtain then, in her single minded way, heads off to see if she can do it anyway. As Henry says, “you can detect a puzzle like a hound sniffing the scent of a boar – and solve it. I’ve seen you do it. You’re a tracker.”

As with the first two books in the series, Adelia’s skills and knowledge have to be camouflaged from those who would kill her or brand her a witch for breaking church law. She will suffer because of her love for a man she rejected in order to save her independence, all while watching him suffer for wanting her, suffer when she’s in danger and have to put on a public show that he, a bishop, isn’t in love with her nor that he fathered their child.

The law and the Church, two of the things for which Henry II is remembered, play vital roles as the story unfolds. But in this book, I think the law truly shines in pride of place. Emma, poor Emma from “The Serpent’s Tale,” must employ it to secure her son’s inheritance. We see both a trial by combat, what Henry was attempting to replace, and a trial with assizes and writs, the new form of justice which would eventually revolutionize English law.

The old Anglo-Saxon practice of “frankpledging” brings more common men into the story as Adelia aids a group in proving that one of their own didn’t commit a crime in return for their assistance in discovering what happened to several of the characters. There are lepers and laymen, dowagers and clerks, soldiers and outlaws, sighthounds and even a pig.

Glytha tells it like it is, Mansur tells it to cover for Adelia, Rhys won’t stop singing and Allie shows signs of following in the footsteps of her investigating mother. Even if Allie’s main interest now is animals.

I wish that Adelia had been given more of a chance to display her knowledge of forensics beyond the sets of skeletons but will admit that the way she proved Eustace’s innocence was cool – if painful to think about. She seems to be shifting more towards being a CSI rather than a forensic pathologist. But I agree with Henry that once she’s onto something, she won’t let go it til she’s satisfied she has the answer. What is done with her answers might not be what she desires but Henry can count on her never to lie to him.

From the way this book ends, I’m cautiously optimistic that we haven’t read the last of Adelia yet. There’s a criminal still on the loose, a King who knows the value of his Mistress of the Art of Death and – better still – how to avoid paying her any cold, hard cash, plus a romantic relationship that still needs hashing out. I’m not satisfied that Adelia and Rowley have determined to best way to proceed but I’m eagerly waiting to find out what they do. B+