REVIEW: From Waif to Gentleman’s Wife by Julia Justiss 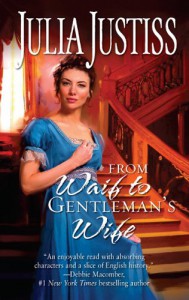 You’ve been writing Regency set stories for years now so by now, I’m sure you’re more than familiar with all the conventions, the standard plots, the trope characters, all the things we’re used to seeing in this historical category. Well, I am too so when I come across something different, I’m liable to sit up, smile and say, “Yes!”

I’m sure that Sir Edward Greaves was, even if only briefly, a minor character in your book, “An Unconventional Match.” Alas, I don’t recall him. Shame on me as he’s a nice guy. As he, himself, thinks, he doesn’t have the lofty title of his friend Nicky Stanhope, the Marquess of Englemere, or the money his financial wizard friend Hal Waterman does but he’s not a bad catch on the marriage mart. So far, his attempts to find a wife he can admire as well as love, and who he thinks would enjoy living with him in the country, have not panned out but hope springs eternal.

In the meantime, he’s intrigued by a little property owned by Nicky. It’s far from Nicky’s other holdings and has currently been run almost into the ground by land agent mismanagement. In these postwar years when crop prices have plummeted and out of work Peninsular War veterans roam the countryside searching for work, it’s hard for even well maintained properties to cover their expenses. When an estate has been as badly administered as Blenhem, it’s almost a lost cause. But for Ned, this “perfect storm” is like a red flag and he offers to buy the property.

Widowed Joanna Merrill is truly destitute when she arrives at Blenhem, late on a stormy night, on foot and half starved. Unjustly thrown out of her last post by his wife after the Viscount got frisky and cornered her in her room, Joanna’s only hope is to find her brother who was managing a small property for their very distant relation the Marquess of Englemere. Only when she arrives, Greville is gone and another man has taken his place.

For various reasons, Ned has decided to take the role of an untitled land agent to allow him to discover just what went on under Greville’s management. He’s immediately attracted to the lovely Joanna but as a relation to his friend, she’s “hands off.” Trying to help her find employment, Ned hits on starting a school for the estate children with Joanna as the teacher. As their interest in each other grows, they attempt to discover what went on at the estate. But will Ned wait too long to tell Joanna who he really is?

For the most part, this is a quiet, country Regency. There is little about ton life in London, no Seasons, no Almacks, no dowagers quizzing young misses. I like that Joanna is a gentleman’s daughter while Ned is a Baronet instead of the usual Duke. And though he is sort of undercover in a way, he’s not a spy for Wellington. The use of the Luddites as a background conflict as well as Joanna and Greville’s experiences at the hands of the aristos is inspired. It’s been years since I saw this aspect of the times used in a Regency.

Ned doesn’t wallow away his romantically broken heart with wine, women and song. No, this boy throws himself into dethatching grass, soil additives, farming techniques and other agricultural improvements. Be still my beating heart. He’s also actually got a good reason for going undercover, as it were, at his new property. He thinks things out and truly wants to do the best for his tenants. What a guy!

I like that Ned listens to Joanna and doesn’t dismiss her concerns and statements about the aristocracy and their abuse of their privileges. He offers considered responses and tries to show Joanna the other side of the coin.

Joanna does get to see the real Ned even though she thinks he’s lower in social station than he is. Ned doesn’t hid who he really is, a man interested in farming and improving the lot of his tenants. While he, in turn, finds out more about her closely held feelings than he would have been able to in more polite, conventional realms. When they do start their physical relationship, I felt that they knew each other and didn’t just jump into lust. I will admit, however, to being slightly tired of the prevalent mental lusting up til then.

When the truth is revealed, at least Joanna doesn’t completely dismiss Ned’s entreaties to listen to his side of things, then to go to London to seek out her many-times-removed cousin the Marquess to see if he can assist her in finding her brother. Then she does listen to Nicky’s wife Sarah – who, thankfully, doesn’t meddle too much – and considers what Sarah, who knows Ned, has to say.

I did notice that Joanna mentions how diligently Nicky appears to work for his tenants at his various properties but then that brings up the question of why Blenhem was allowed to sink so far into disrepair while Nicky still owned it.

Another thing I noticed is when Joanna first arrives in London, she thinks something about how Nicky never offered to assist her. But then, I thought she had dismissed all thoughts of even going to him to seek aid. So is this really his fault he didn’t offer to help a relation who never called on him?

I was glad to see Jesse and Mary have a happy, and believable, ending. Yes, they will be sailing to America but honestly, I doubt that they could have lived in this small village given what Mary was forced into.

I hope readers looking for a slightly different Regency will check this one out. The innovative use of the actual concerns and conflicts of the age – progression of technology and factories, destruction of traditional handicrafts of rural England and fate of wounded soldiers after the Napoleonic wars were finally over, make it stand out. The mental lusting dragged and I had some slight questions about various parts of the plot but overall, I enjoyed it. B-

→ Jayne
Previous article: REVIEW: The Care and Taming of the Rogue by Suzanne Enoch
Next Post: Thursday Midday Links Roundup