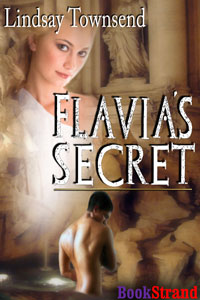 Books set in ancient Rome or Roman Britain automatically get points from me. I dunno why. Maybe it’s the thought of those strong men running around in skirts and draped bed linens. But anyway, I’ve sought them out for years from back in the days when you couldn’t find one for love nor money. So kudos to you for choosing this setting for your book. Now for the bad news. I would have liked this book more if I’d read it ten years ago. As it is, I’ve read so many books, regardless of the setting, with similarly acting characters that I can’t appreciate it as much as I would like.

Marcus Brucetus has finally shown up to claim what his adopted mother left him after her death. A house in Bath, land in the country and five town slaves. If only he’d be an absentee landlord and leave them alone, Flavia and the others would be happy as pigs in slop. When he starts asking questions about how and under what circumstances the Lady Valeria died, Flavia gets cold chills at the thought of what might happen to them all if her subterfuge is discovered. Rome isn’t known for its kindness to slaves. But they all soon discover an even worse threat in the person of Lucius Maximus, the new decurian of Bath, who is man who goes after what he wants – which is almost everything.

Flavia is everyone’s darling. She’s beautiful, intelligent, brave, kind, looks after mistreated children and small animals. Every man under 45 wants her bad yet she’s totally unaware of how her staggering beauty affects them. She’s the daughter her now deceased mistress never had, the pet of the older house slaves, the object of loathsome, lustful desire of the villain and the object of pure, though hot, desire of the hero. She’s damn near perfect. And even when she stomps off in a snit or goes out alone into the wild frenzy of Saturnalia, while the hero might be near mad with anxiety over her fate, he still just ends up swooping her into his manly arms and worshipping her. I’d like to be Flavia.

Marcus is way to concerned over whether or not Flavia wants him. He worries over his definite feelings and her possible feelings like a psychoanalyst. He’s determined to woo her and win her – trust first then nookie – way past when most men would toss in the towel and head off to check out the toga girls at the baths. Yes, he has the example of his parents in front of him but, gosh, he’s just so perfect as well. Handsome, righteous, doesn’t believe in lifelong slavery, is also kind to poor children and all animals, has great fighting moves and loves to banter with and tease Flavia. I’d bring him home to meet mother but all this perfection makes me wonder if he secretly enjoys farting at public dinners.

The villain is evil and little more than a prop to show how wonderful the hero is. Maximus is clever about his source of the information he uses to control the town but other than that, he’s just an ancient mob boss with a perpetual hard-on for Flavia.

The denouement is very melodramatic. Flavia escapes one source of loathsome desire only to plunge headfirst into what we all knew was coming from the time Maximus made his first appearance in the book. Then she has to wail and wring her hands while listening to Maximus spell out the Big Misunderstanding before she gets caught. And how many times does she escape being violated? Enough to remind me of a 1980s style romance heroine.

Now you’re probably thinking, “Well, what did this bitch like about my book?” The historical details are lovely. The time and place are very well done. Brava for picking a spot other than Londinium or the border with the wild Caledonians. I have to admit that while reading the scenes in the baths, I couldn’t help but think of all the Regency and Georgian era books I’ve read with all the characters trooping down to take a glass of the healthful waters – hold your nose while you drink that nasty, sulfurous stuff!

And the conflict between the hero and heroine – i.e. the source of the title of the book – is fantastic. Now here’s a real reason for the heroine to hold her tongue and keep things from the hero. When faced with the possible fate meted out to slaves whose master dies suddenly, I’d do just what Flavia does and then some.

I also liked the character of Lady Valeria. “But she’s dead when the book starts,” you say? Never mind that. You’ve done such a nice job describing her, her habits, her personality, and her life that for me she came alive anyway. I think I would have liked sitting down to tea with her.

I think this book illustrates Jane’s theory that a C grade isn’t necessarily a bad grade. The things that bothered me probably won’t even matter to many while, for the setting alone, I would have bought a copy if you hadn’t offered it to DA for review. The description of your newest book intrigues me and I can honestly say that I will be trying more stories from you. C+

This book can be purchased in mass market from Amazon or Multiformat from Fictionwise.

→ Jayne
Previous article: REVIEW: The Girl Most Likely To by Susan Donovan
Next Post: Write Well, Be an Advocate (and a British Citizen) and You Too Could Be Knighted