REVIEW: Five Quarters of the Orange by Joanne Harris 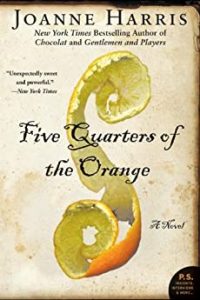 When Framboise Simon returns to a small village on the banks of the Loire, the locals do not recognize her as the daughter of the infamous woman they hold responsible for a tragedy during the German occupation years ago. But the past and present are inextricably entwined, particularly in a scrapbook of recipes and memories that Framboise has inherited from her mother. And soon Framboise will realize that the journal also contains the key to the tragedy that indelibly marked that summer of her ninth year. .

I’d seen your books available in a few other catalogues but it took one of the 100% rebates from Fictionwise to spur me into action. As Jane says, what’s to lose? Watching the new Ken Burns PBS series on WWII had me in the mood so I took the plunge. The book starts a little slowly but I was soon lost in the wealth of visual details about life in the countryside of France during the German occupation of WWII and how this impacted the family of Framboise, her widowed mother and two siblings. Memories of the event that shattered their small town still linger in the modern day village but some spark of the defiance and stubborness that filled her youth has made Boise return as an older widow herself.

It’s hard to like almost every main character in the book at some point or another during the story, yet I still had sympathy for almost all of them. Boise, fighting against her rapacious nephew and his wife now and against her mother’s seeming stone heart then. Mirabelle, trying to keep a roof over her childrens’ heads and food on the table during wartime. Honestly I think the woman should have stuck to tending the many fruit trees on the family farm. She tries to strengthen her children – by emotionally pruning them like vines – and also named them like her beloved fruit trees/vines. I had forgotten that this technically isn’t possible in France though was reminded while discussing the book with my local French expert. Thanks Laura!

One of the limitations of a first person narrative is that sometimes we don’t get as much information about certain characters. We see Boise’s siblings, Cassis and Reine-Claude, only through her eyes and she doesn’t have much sympathy for either of them while they’re all young or as adults. At least with her mother, we see what Mirabelle wrote in her secret code in her journal. But Cassis and Reine-Claude are shown through a somewhat envious younger sister’s viewpoint coupled with an older Boise’s adult feelings about their early teenage weaknesses. Children can be horribly cruel and these 2 sisters and brother are no exception. They can be very kind to each other and stick together yet have moments of “me first and screw you.”

The story is filled with wonderful food images very similarly to “The Wedding Officer.” I immediately wanted to go out and buy a French cookbook to try some of the recipes. How do Frenchwomen stay so thin? I liked the contrast between descriptions of the food Boise grew up with and what as an adult she served in her creperie and the modern, grease laden junk that was served in the mobile trailer used by the forces trying to extort her recipes.

Boise has a good eye and observes her village, the people, times and places. We see the war and its repercussions through her 9 year old eyes with her youthful reasoning. Telling the young German soldier about the things they see and hear in the area only means the possiblity of chocolate, lipstick and comic books to the three children. It’s only long after they start down the easy road of collaboration that the implications of what they’re doing begin to dawn on them.

The very slow build up of the story is worth it to read all about this girl’s life — except for the fish part. I got bored reading how she was going to trap the fish and how much time and effort catching “Old Mother” meant to her. However it did play a central part in the event that forever changed Boise, the town and villagers and which haunted her for years. But if Boise hadn’t finally learned from the mistakes her mother made with her children and come to realize how much she cared for childhood friend who never gave up on her, I wouldn’t have finished the book with an upbeat feeling. Instead I would have sighed over the waste of so many lives and still wanted to try some French recipes. It’s the insight that Boise gains and which she decides to incorporate in her life which should be the lesson in the book. B