“Kerry Anne MacBride and her quirky family are a package deal-‘get one, you get them all. The high school art teacher is stubborn and fiercely protective of her kin, making her the absolute wrong woman for a straitlaced, hardheaded, by-the-books lawyer like Matt Lawrence, no matter how attracted she is to him. And anyway, now’s not the time for distractions! Kerry has to focus on cleaning up the latest MacBride mess: a dilapidated amusement park her uncle just bought with the life savings of a bunch of senior citizens, including Matt’s mom. 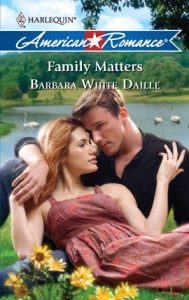 To restore Rainbow’s End, Kerry will need Matt’s help-‘and the luck of the Irish-‘because even though they clash more often than bumper cars, Kerry and Matt are about to share the wildest ride of their lives!”

The description of Kerry as a high school art teacher is what interested me most in this book. I have fond memories of the art classes I took and the talented teacher who did his best to get the class beyond the stick ‘figure’ stage. I’m glad that Kerry’s profession actually ends up taking center stage for her and isn’t just window dressing. Matt’s lawyerly skills in interrogation also play a roll as well as helping to define the differences between he and his manipulative father. I love it when characters’ backgrounds are chosen for a reason and mean something to the plot.

I do have a question to ask though. Is “getting my Irish up” a legal defense the way shooting an adulterous wife used to be in Texas?

Defendant: “I’m sorry Your Honor. I didn’t mean to trash the bar, help overturn two cars and set another one on fire. They just got my Irish up.”
Judge: “That’s okay then. They should have known better than to provoke you.”

I’d love to have this built in excuse for all bad behavior. Could I be an honorary Irishwoman if I ever get in trouble? Seriously though, can a book be written about Irish or Irish-American characters and not use this stereotype? Just because you have red hair, doesn’t mean you inherently have a quick temper. Please, enough already.

One thing I did find interesting is the fact that Kerry has such bad parents. I mean really neglectful, which is a departure from a lot of Harlequin books I’ve read. But they and their behavior do help explain why Kerry is so bonded to her family and willing to do almost anything to protect them. I’m still not thrilled that she’s been a martyr to her family for so long nor that she seems to be set to make a career out of it but it is a bit more understandable.

Meanwhile Matt’s background has obviously shaped him as well and gives insight into why he’s so protective of his mother and looks with such derision on Kerry’s Uncle Bren. As the page count mounted, I got a bit nervous as to how you would engineer the changes in Matt and Kerry needed to help bridge the gap you’d created between them and while Matt’s mother’s revelation edges towards deus ex machina territory, it does serve its purpose.

These people do a lot of psychoanalysis of each other. Kerry’s got the key to Matt’s problems, Matt sensitively nails what actually makes Kerry tick and everyone moves to a higher plane of understanding. It’s a little hard to swallow but at least the characters grow emotionally and mature in wisdom.

I ended up liking this book more than I thought I would when I realized it featured a martyr heroine. They usually make my eye lids twitch. And while Kerry looks like she’ll remain one, at least she understands that she is one and has chosen it. I was most happy about Matt’s changes and how he has a new appreciation for his mother and understands that he won’t become like his father. Living with the manipulative MacBride clan would drive me batty but it does appear to be the perfect thing for Matt. Oh, and the title, with its double meaning, is perfect. C