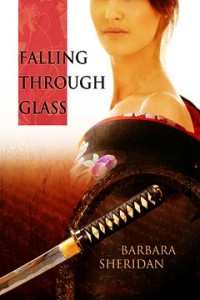 When Tina submitted a list of new books to Dear Author for possible review, “Falling Through Glass” grabbed my attention. Hmmm, time travel to 19th century Japan in the waning days of samurai warriors. Can’t get much more different than that.

Since I’m feeling lazy this morning. I’m just going to steal the blurb at Liquid Silver.

Japanese-American Emiko Maeda set aside her film school studies following the sudden death of her father. At odds with her mother and burdened with the guilt over her role in the tragic accident, she moves in with her uncle Jake and comes into possession of an antique mirror. While accompanying Jake to Japan on a film shoot, Emmi is caught in a freak storm and plunged through time–into Feudal Japan and the world of samurai.

The city of Kyoto is ablaze with violence and on the brink of civil war. Nakagawa Kaemon is a young samurai with a secret. He gathers information on those who claim to "Revere the emperor" but harbor their own agenda to control the country. Kae is honor bound to execute anyone who poses a threat to the throne even if it is Emmi, the unusual young woman he has come to love.

The first 50 pages of this book almost lost me. Way too much telling and not showing. I had actually put the book down at this point only to rethink it the next morning. I want to promote different times and places in books so I hefted it up and kept going. I’m not sure if it was my determination to finish the book or at this point you started more showing and less telling but it’s then that things started to pick up and become more interesting.

But I have to ask, what is with heroine casually accepting that her Uncle Jake has time traveled? I’d be all “WTF?!” but she just brushes it off in the conversation almost like Jake was merely saying he’d gone to San Diego for the day. Then when she tells Kae she’s from the future, he does the same. Or at least initially, though later he does think a little on what she’s said. But it’s more that he wants to see this future than any freaked out, “OMG! (or Japanese equivalent), she says she’s from the freakin’ future!” Emmi’s g-g-g-whatever grandfather is the same. His “visions” were never actually explained to my satisfaction. Ditto how Emmi’s mother’s monk works in the story.

Emmi is young – and she does act it at times. Pouting when Kae leaves her alone, excited about her wedding night – let loose your inner slut!, hasn’t had her maternal hormones kick in yet as seen when she takes Matsuhito out slumming through the festival, worries about possible STDs after her hot wedding night. Emmi also creates a ruckus whenever she’s let loose. I just wish she’d take a little more responsibility for the people she injured and the property she destroyed. Instead she pouts some more and tries to put the blame on everyone but herself. It takes possible deadly consequences to others (Emmi have you ever heard of seppuku?) before she finally does realize when she’s done something wrong.

Lucky for Emmi that Kae can look deep into her eyes and “just tell” that she’s not a traitor. Which he’ll believe until she does something – yet again – to make him rethink his position on that. At one point, Kae thinks that he wished he had more time to just sit with Emmi and get to know her. So did I. These two fall in love fairly quickly given all the unusual aspects of how they meet and get to know each other.

At first, I wondered if we’d get Emmi’s view of how things differ from her world vs 1864. Specific things and not just, “wow I’m in the past.” I loved her thoughts on the Shimabara brothel district, the palace, the hair gunk and face paint, the whole physical process of dressing for the wedding and actually walking in her outfit. This made the story more immediate and interesting to me.

Along the same lines, the scenes of the fair when Emmi and Kae attend as well as when she takes Prince Matsuhito there, are fun and a wonderful way to “show” the past and how Emmi views it.

The use of the historical actions as a way to decide whether or not Emmi’d stay in the past or return to the present is great. With TT books, I dislike any lingering regrets of “should I stay or should I go?” You remove all doubts about this. I was a little lost at times with regard to the historical action going on at this point in Japan but not enough for the story to lose me.

I hope that she and Kae work out their differing views on marriage and a woman’s place in it. But hey, at least he’ll buy her lingerie! Oh, loved the haiku poem but did you not want to include any of Emmi’s crappy poetry?

Like Mrs. Giggles, I also got the impression that this is a sequel to some other book. That I was missing some information that would allow some of the incidents in this book to make sense. There is a lot I like in the story and I wish I could give this book a higher rating but with all the issues I have with it, I’m afraid not.

FTC discloser – A free copy of this ebook was provided to Dear Author by the publisher for a potential review.

This book can be purchased at Liquid Silver Books.